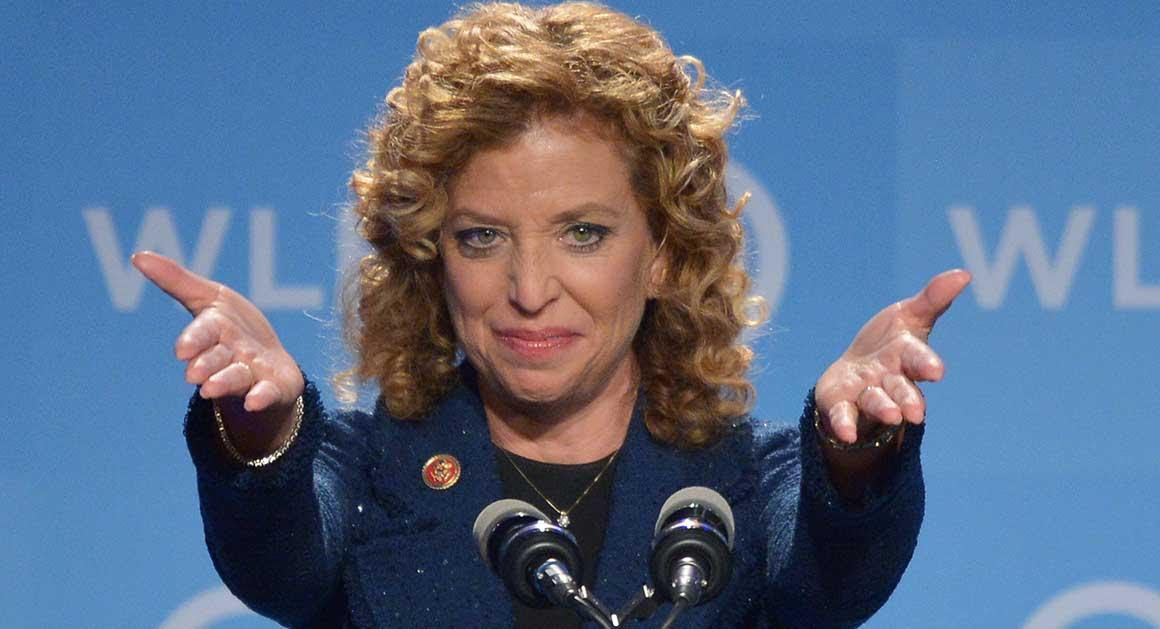 You'll find very few criticisms of DNC chair Debbie Wasserman Schutz in these archives.  Not because I disagree with her about essentially everything, but because I arrived at a point seemingly some years ago that her tenure was helping me convince people who have left, or ceased voting for, the Democratic Party for their own various reasons -- many of them just apathy -- that they had made the right decision, and I used those examples to push others in the same direction.

Essentially DWS being the world's worst Democrat made me a bad one, too.  As those of you who know me personally or only by reading here over the past decade-plus, I haven't been able to quit the Democrats altogether because there are in fact good, honest, hard-working, respectable people -- activists and politicians -- whom I like, value as friends, and trust.  Not to mention plenty of their candidates that I have block-walked and phone-banked for, Sylvester Turner and Wendy Davis most recently among them.

Wasserman Schultz has never been one of those Democrats, however, but regular snark and occasional outrage seemed a waste of pixels.  That's in spite of her conduct just during this election cycle being both atrocious and unsurprising.  Even when threatened with losing her job two years ago, she responded by playing both the "sexist" and the "anti-Semite" card.

Given all that exceptional misbehavior, why bother complaining?  She is, after all, doing the dirtiest work that needs doing: destroying the centrist, corporatized, neoliberal Democratic Party, and from within to boot.

Why would that bother me?

So when social media exploded yesterday with the news about her suspension of access of the Sanders campaign to its own voter database, because of a classic (characterized as such by IT professionals) and repeated error by the sole vendor of Democratic computerized voter files, I frankly considered her own breach of contract action to be an early Christmas gift to Jill Stein and the Green Party.  Sure enough, I counted over a dozen different postings on my own social media feeds of Democrats threatening to bolt, using phrases like "rigged election" and -- horror of horrors -- "just as bad as the Republicans".

As we know it took a federal lawsuit for the chairwoman to come to her senses and resolve the kerfuffle.  But plenty of lasting damage to long-term relationships with devout Democrats was done, and the sole benefit to her cause -- electing Hillary Clinton president -- seems to have been in ginning up viewers for tonight's candidate debate... which is going up against Christmas parties, high school state championship football, the opening weekend of college bowl games and even the Dallas Cowboys playing in the same time slot.

The male demographic may suffer a good bit, but she can't be considered a complete failure if ABC finds itself pleased by the overnight ratings, after all.

Ana Kasparian sums up the incompetence of both DWS and the database vendor without mentioning NGP VAN's too-close-for-comfort ties to Clinton, and speaks calmly for the growing minority of Democrats who won't be casting their ballot for the former secretary of state.  A couple of days ago, that percentage could be estimated at about 16% on the low end, and 41% on the high.

Should the Greens send her a thank-you card?  Too early for that, but they can certainly be grateful for such generosity.  The more Debbie Wasserman Schultz shakes the tree, the more potential Green voters fall to the ground.  I hope there are some smiling progressives with large baskets ready to go to work harvesting the fruits of her labor.

This infuriated me yesterday and reminded me of why I am so leery of the Clintons.

Although, as someone I said that to responded: "What did Hillary do? She didn't even say anything!"

Why would she need to say anything publicly when she has the DNC doing her dirty work for her?

The big money insiders are winning. They don't need to resort to this.

Wow. Ted just comitted oral sex on Hillz, DWS, and the DNC. Fuck him if he's that fucking much in the Hillary tank to repeat Hillz/DNC talking points verbatim.