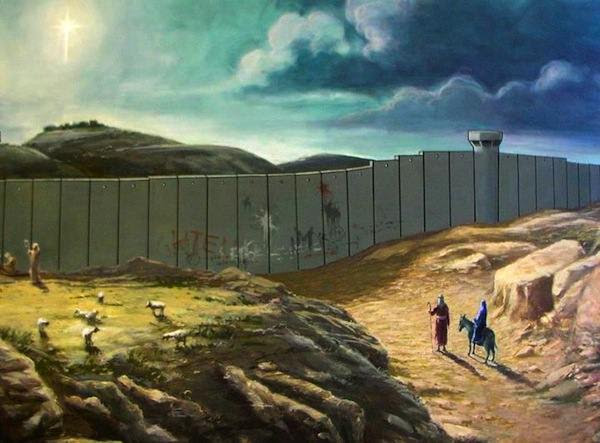 The card has recently gone viral again because of the holidays, but it is actually a few years old and seems to circulate around this time every year.

The piece first appeared at Santa’s Ghetto exhibit in London in 2005, which followed Banksy’s trip to the Middle East.

Regardless of when the image was created, it sends a powerful message about how divided (Israel and Palestine and the other surrounding Arab states are) on racial and ethnic lines, creating a massive refugee crisis, and widespread ghettos in many parts of the region. This current reality is obviously highlighted by the biblical story of Joseph and Mary, two refugees themselves who were said to travel across those lands thousands of years ago.

When the state of Israel was created, instead of integrating the Arab and Jewish cultures together the ruling class put policies in place that would force the Palestinian people onto unfertile ghettos, separated from water sources and food growing lands by giant walls. The Palestinians were also not given the right to organize, own property, or work, and without these basic freedoms, they remain refugees. These policies would result in a growing hostility between the two groups which eventually flared up in physical violence. This violence has spread all throughout the oil-rich Middle East and has allowed the western establishment to have a permanent involvement in the region’s affairs, just as they planned.


It really is this bad.  In fact it might be even worse than described above.