In 2008, 6 million Americans didn't vote because they missed a registration deadline or didn't know how to register. In 2014, we want to make sure no one is left out.

On September 23, 2014, volunteers, celebrities, and organizations from all over the country will "hit the streets" for National Voter Registration Day. This single day of coordinated ﬁeld, technology and media efforts will create pervasive awareness of voter registration opportunities--allowing us to reach tens of thousands of voters who we could not reach otherwise.

Texas, as we know by now, is one of the worst states of all in this regard.  There are very likely millions of Texans who don't vote as matter of habit, and thus aren't registered to vote, for whatever their personal reasons for not doing so happen to be.  And it's all but impossible, particularly at this stage of the election cycle, to convince someone who is skeptical of their power -- who is on the fence about whether they should participate in our democracy (or representative republic, if you prefer) -- to exercise that power.  As the deadline to register to vote in the midterm elections closes in, the focus will soon shift to get-out-the-vote efforts.  But for about two more weeks, if there's anyone you know who needs to get registered, or who needs to be certain they are qualified (by Texas Republican standards) to vote, then today is the day to do that.

Our local voter registrar, Mike Sullivan, is doing his part.  Here is a map of all the locations in Harris County where you can go and register to vote today.  If you need proper documentation to verify your citizenship in order to register, you'll be told where and how to get that, and how much it might cost, and how long it might take.  That might be the most important thing a person who is not registered to vote can learn today: "what extra things must I do to make sure I can vote?"

So you can spin it either way, left or right: control of the US Senate is at stake, so get registered and then get back to the polls next month (early) or in November (on Election Day).  "The future of Texas hangs in the balance", blahblahblah.

Voter registration efforts -- indeed, solicitations for voting by mail -- should be nonpartisan, but they aren't. 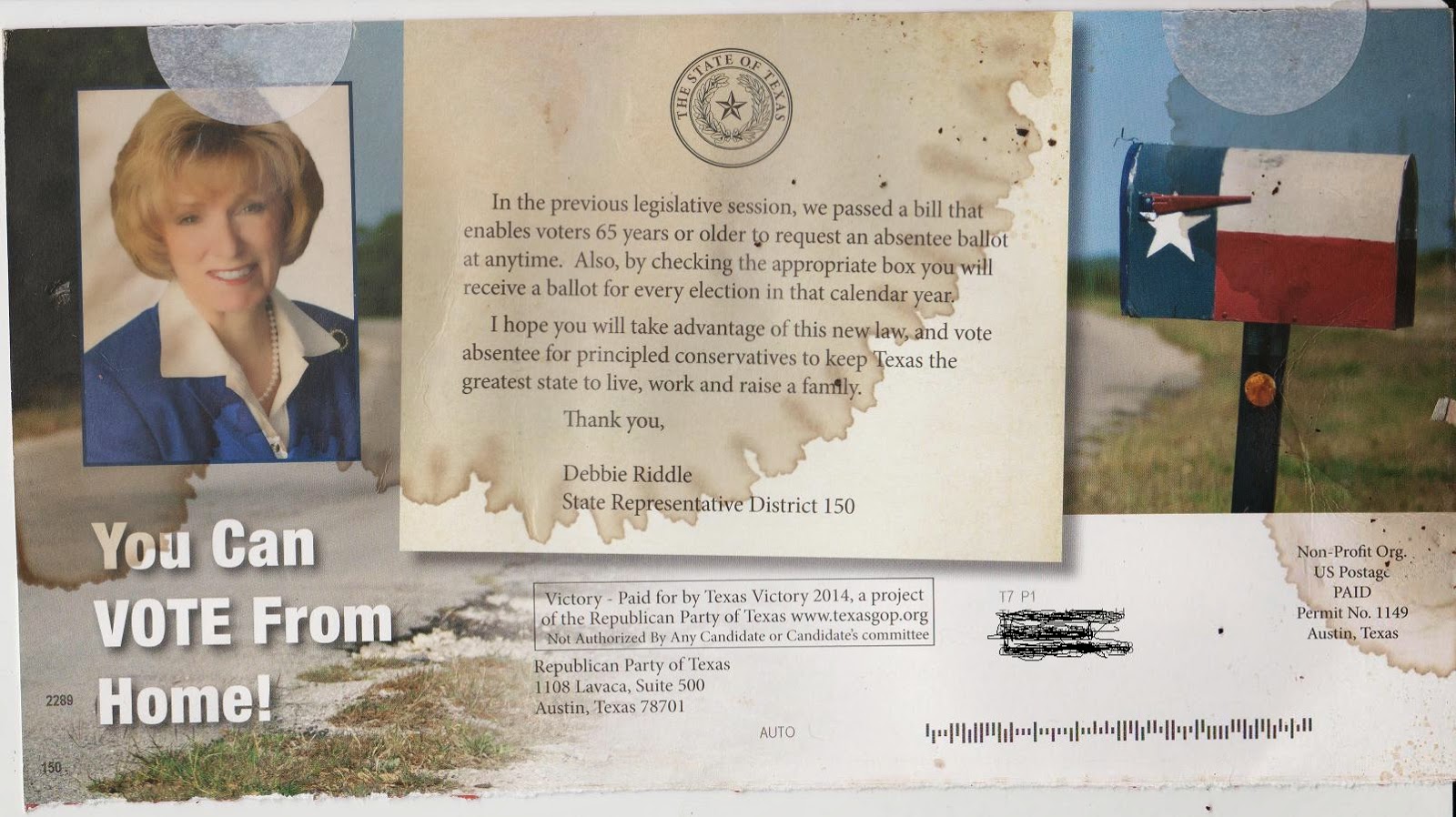 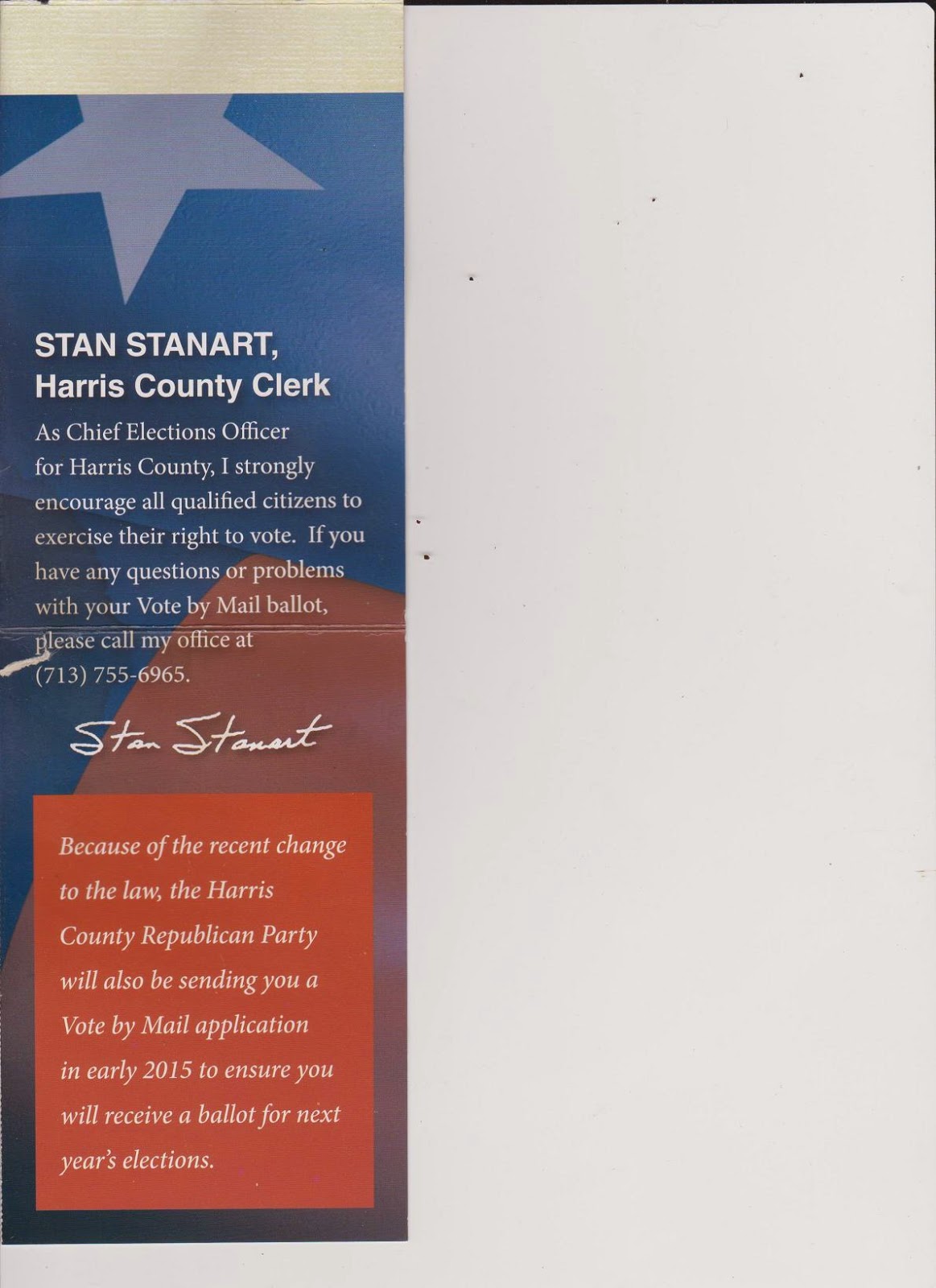 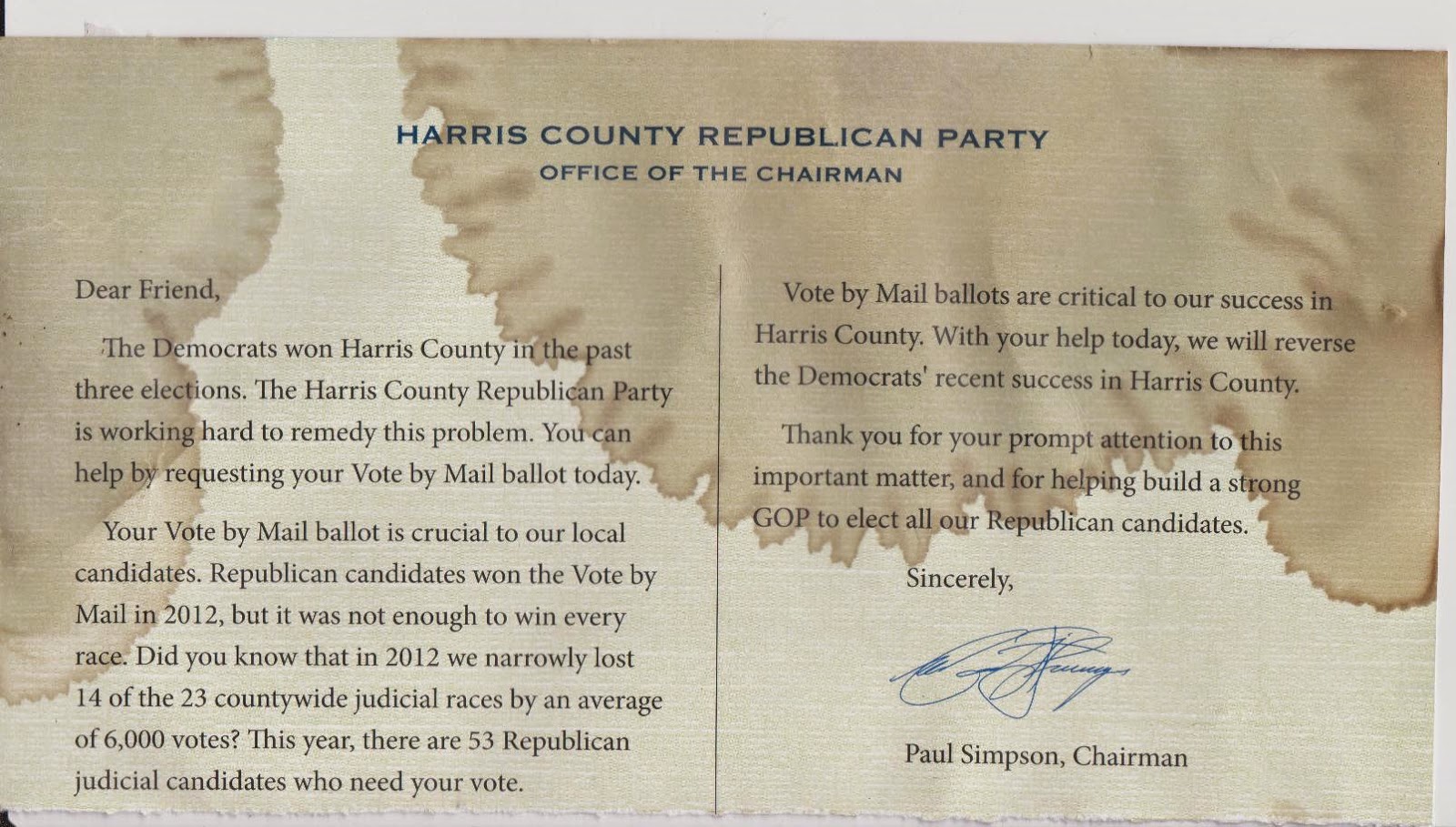 I thought the blossoming coffee stain was a nice artistic touch, don't you?   I'm sure this is all perfectly legal in Texas.  Just like creepshots.

And the Texas Democratic Party appears to be doing something similar, as Charles reports, and if that's the case then everybody's hard at work, even the election law attorneys for both parties making sure everything is above board.  This is separate and apart from today's voter registration push, of course, and falls in line with GOTV efforts by both major parties to increase their turnout.

So the message is: whatever you do and however you do it, get it done. And don't do anything that's against the law when you do.
Posted by PDiddie at Tuesday, September 23, 2014

Oh, the GOP loves absentee voting from home. After all, most real vote fraud is committed by relatives, or others, fraudulently filling out the ballots of seniors, or even more of 80-plus super seniors, almost all of them white, and GOP, and with relatives who are even more GOP.