More Democrats that no one should vote for

The first installment of this continuing series began with Junior Samples Jim Hogan, who is running -- well, ambling anyway -- for Texas Agriculture Commissioner.  The second chapter discussed the position of Harris County Judge, where the Democrat (sic) suddenly quit and endorsed the Republican incumbent, leaving only the Green, David Collins, standing up to Hunker Down Emmett.

It's time once again to remind Texas Democrats that there are better options than a straight ticket.

-- Henry Cuellar: the lousiest Democrat in Congress.  I have a little hesitation in seconding this evaluation from Down With Tyranny!... but not a lot. 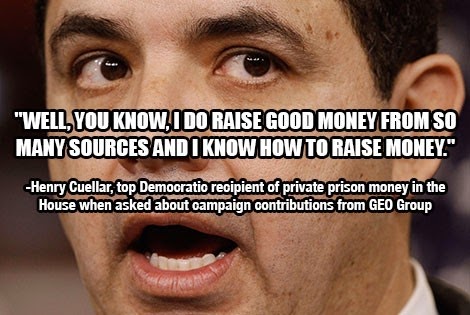 An anti-choice, anti-gay reactionary and corporate whore, Cuellar has one of the worst records of any Democrat in Congress and the worst when you take the partisan lean of the district into account. According to ProgressivePunch his lifetime crucial vote score is 40.96. Of the 7 Democrats with more Republican voting records than Cuellar, all come from Republican-Leaning districts. He was the co-founder and co-chairman, with Buck McKeon of the infamous House Drone Caucus, which pays him off with gigantic legalistic bribes every two years. He's always one of the handful of Democrats backed by Republican organizations like the U.S. Chamber of Commerce, the Club for Growth, and the NRA.


More from Mother Jones.  Cuellar has no Republican challenger in CD-28.  He does have a Libertarian one, and also a Green, and an independent.  South Texas progressives: you gotta start somewhere.

On two occasions at the Texas Democratic Party convention this past June, I turned around to have the scowling visage of the Democratic nominee for the Seventh Congressional District of Texas standing too close to me, staring at me.  Once was at the breakfast reception for Texas Railroad Commission nominee Steve Brown, and the other was at my -- our -- Senate District meeting.  Actually he didn't quite sneak up on me that time; I watched as he made his way from well across a large convention room, matriculating through and around several dozen people so he could stand beside me.  Just as weird as it sounds, considering my very obvious, very public derogatory opinion of him.  He never attempted to speak to me, nor I him.  In fact he never has.

So I have to guess that this was some pathetic little attempt to try to intimidate me.  He certainly must have thought this sort of thing worked well in his primary battles with Lissa Squiers.  He doesn't seem to understand that if he would just ignore me, I might stop blogging about what a bitter, flaky, resentful, creepy sneaky weirdo he is.  Some Democrats like him; it seems to be a 'lesser of two evils' rationalization on both their parts.  No thanks.

Cargas has found his niche, and it isn't electoral politics.  There will be no Peter Principle at work in his race; he'll be lucky if he gets 33% of the vote.  He should get satisfied with his very comfortable station in life.  He's the kind of Democrat that can be at ease voting for Republicans like Ed Emmett.  Or Jim Hogan.  Or Henry Cuellar... if he were to relocate himself to the southern suburbs of San Antonio, or perhaps Laredo.

Maybe if he did move there, he could challenge Cuellar.  From barely to the left.

One more observation: it is a reflection of the same kind of conservative, corporate, pro-business and anti-99% Democrat that Annise Parker is that she hired (or signed off on the hiring of) Cargas to work at City Hall once again.

I so cannot vote for James Cargas that for the second cycle in a row, I have to vote for either nobody or the Libertarian as my representative to Congress.  That's how foul the conservative crap is in my district.  Yes, I know some of you have it much worse.  Good on you for tolerating it better than me.
Posted by PDiddie at Monday, September 15, 2014

That jackwagon Cueller's office has put me (business, not personal) on his email list. When I told his office that Marlin is nowhere near Laredo:

"I understand that Marlin is in Rep. Bill Flores’ district but it doesn’t hurt to have our contact information should you need to reach Congressman Cuellar with larger issues affecting South Texas and the border."