Houston: Home of the brave

OK, Halloween is still a month away, so it probably wasn't some horrific-idea costume that the gent was wearing when he walked into a Jason's Deli in Houston with the ISIS logo emblazoned on his shoulder. Social media is going wild with the image of a man in robes sporting the ISIS emblem that says only one thing — be afraid, be very afraid.

"You don't believe they're here? Look who was just found at Jason's Deli in (sic) at West 34th and 290 in Houston," Mike Kasper emailed friends after taking the photo. "That's the black standard ISIS emblem on his shoulder. Share the hell outta this. — Mike."


I must be friends with all the wrong conservatives.  This was the first I had seen or heard.

The folks at Jason's have received an earful. A Jason's customer service representative at the chain's toll-free number tells CultureMap, "We have gotten plenty of feedback about that... There was someone there but he is not a Jason's employee."


"He's not one of ours!" was Jason's first response.  Well, he does look like a customer to me.  If the photo hasn't been Shopped.  (More pics at the link.) 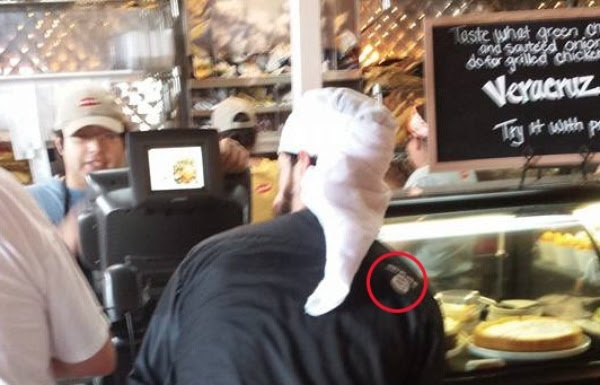 Or so Kasper tells KTRH radio personality Matt Patrick. That interview is posted on the Christian rescue website shoebat.com, which is all over the sighting reporting not only Kasper's story but also claiming that another man wearing an ISIS logo was arrested in H-Town.


Matt Patrick, for the uninitiated, is one of the two Rush Limbaugh-wannabees on your local AM dial.  He's been looking up at Michael Berry for years.  Maybe he just got his big break.

This episode touches all the hot red buttons: Muslim terrorists like Obama pouring over the "boarder" with the rest of the Ill Eagles, etc.  Why is it that the people with the most guns and all the ammo are the biggest scaredy cats?

Do you think this will help boost turnout in the upcoming elections?  Honestly, I don't.  These people stay so perpetually frothed up about nothing that there's just no more juice to be squeezed out of that lemon.

Keep calm and carry on, even in the face of terrified Republicans.
Posted by PDiddie at Friday, September 12, 2014

Are we sure that's the ISIS logo? Maybe it's a baseball and a broken bat, because he's an Astros fan!