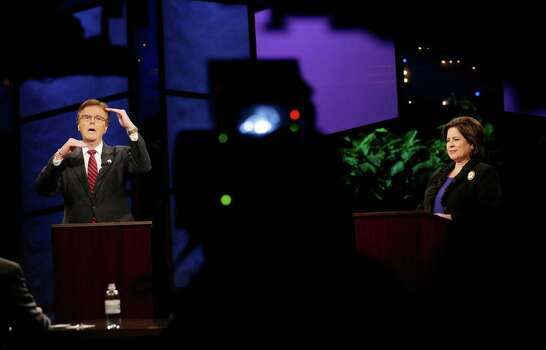 It was lively and contentious, but just as devoid of actual debate as the first Davis-Abbott matchup.

In the only scheduled debate in their race for lieutenant governor, state Sens. Dan Patrick and Leticia Van de Putte faced off on Monday night in a lively exchange that displayed their divergent positions on everything from health care and immigration to school finance and taxes.

Both candidates played offense: Patrick, R-Houston, attempted to portray Van de Putte, D-San Antonio, as “out of step” with Texas voters. Van de Putte used the back-and-forth to try to pin Patrick down on votes he'd taken on cuts to public education. But one of the biggest points of contention in the hour-long showdown in Austin was over the state’s tax structure.

Patrick recently called for reducing the state’s dependence on the property tax to fund public schools and relying on the state’s sales tax instead. On Monday, Van de Putte used Patrick's position to argue that he would raise the sales tax, which she said would hurt businesses and consumers. Patrick sought to clarify his proposal, saying he would only support increasing the sales tax “by a penny or two” to compensate for reduced revenue from property taxes.

“There's two people standing on this stage, and I’m the only one that doesn’t want to raise your sales taxes,” Van de Putte said. “To burden Texas businesses and families with a sales tax increase ... well, that’s not being pro-business.”


When you have a spare hour, watch it and see for yourself.


The live-Tweet stream was entertaining, and Forrest Wilder's live-blogging also.  Here's your take-away.

It can’t be stressed enough: Dan Patrick sounds about as radical as he ever has. By comparison, LVDP sounds like a moderate Republican, I think what Patrick would call a RINO.


Patrick took a similar approach as Abbott did a week ago, throwing out red meat to the Tea Party base of the GOP. There's no attempt whatsoever to reach swing voters or independents or even employ that tired "across the aisle" cliche'.  He fear-mongered over illegals coming over the border with hepatitis, declared he would swap a state sales tax increase for a property tax cut, bragged about cutting education spending, and stood firm in the eyes of the Lord against abortion even in the cases of rape or incest.  As well as gay marriage.

He was right about one thing: the choice is as clear as it ever has been.
Posted by PDiddie at Tuesday, September 30, 2014