"Repeat after me..." (and remember: every time you say it, an angel gets its wings). Some people are comparing it to rape.  That's an overreach, but "bullying, badgering, shaming, scaremongering, insulting, belittling, mocking, and abuse of all varieties" isn't.  What I have been persuaded of is that Hillbots think that Berners are just as shallow and intellectually corrupt as they are, and thus will respond to these playground taunts.

They won't (not if they're as smart as I believe they are, that is).  And if it is you that is saying "a vote for the greater good is worse than a vote for the lesser evil", then it is YOU that has become the Jackass.

The best response to bullying has always been a punch to the bully's nose. 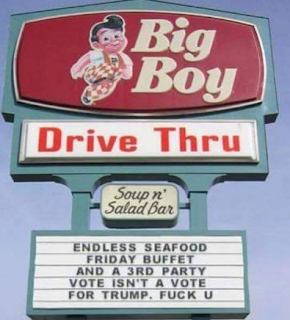 Since we're shaming bullies on the playground these days, it certainly seems appropriate to do the same to the grownups online.  And offline, as necessary.
Posted by PDiddie at Friday, August 12, 2016

You need to use tags or labels like I do on my blog. That way, we could click "Daily Jackass" and see the whole set!