Pretty grim.  (Click to enlarge or go to the source, linked.) 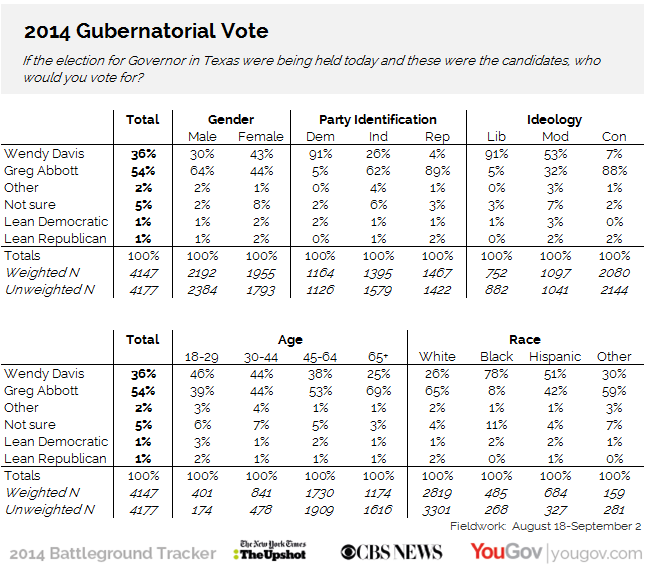 After Abbott released an internal that showed him up 18, the Davis campaign released one showing him up eight (the same as that Rasmussen poll a month ago).  So what was needed for some Davis momentum was an external poll that would reveal the race as some figure at least between those two, or closer to hers.  No such luck; he gets his number.

Perhaps most grim to this tea leaf-reader are the percentages of independents (62%) and Latinos (42%) supporting Abbott.  That's almost insurmountable right there.  Charles seems to be either looking at the bright side or shrugging it off, but I can't do either one.  Polling had concluded by the time the news about Wendy Davis broke just one week ago, so how that might influence the results is something to look for in the next poll, whenever that might be.  And now the best that can be hoped for is another poll sometime over the next month that shows the race tightening.

The historical Texas numbers in the last two races for governor (2010, 2006) produced splits on the order of 55% for the Republican, 41% for the Democrat, 3% for the Libertarian, and 1% for the Green.  So this might be our first glimpse of another Red Wave, similar to what washed out the Democrats down the ballot four years ago.

Expect the attorney general to be even more detached from campaigning, debating, speaking to the media, etc. as we close in on the deadlines for voter registration (October 6), the start of early voting (October 20, five weeks away), and Election Day (November 4).  He's running for re-election -- yes, re-election -- in the Rick Perry style.

We're likely to see more inspiring (sic) teevee ads showing Greg Abbott pushing himself to the top of a parking garage, kissing Latino babies, firing a gun and even climbing a mountain where there's a stream for him to catch a fish.  Because that's how he'll roll to the end of this campaign season.... unless things close up a little, and then we'll see the attacks ads -- already cut and in the can -- pushed out onto the airwaves.

Update: Eye on Williamson reminds us that it's okay if it seems impossible.
Posted by PDiddie at Friday, September 12, 2014

That pretty much unscientifically confirms YouGov.

And the GOP lean in independent voters confirms that, too.