The Texas Progressive Alliance encourages you to go get your vote on this week, before the lines get any longer.

Numbers will be trickling in from all over the state later today, but for now we are getting reports of very long lines for casting ballots even at polling places that have traditionally been more like ghost towns on the first day of early vote.

All over Texas –- in Houston, San Antonio, Dallas, Fort Worth, Austin, The Valley, Lubbock, etc. – wait times are 30 minutes to an hour at traditionally empty polling places. Some Texas House members down in San Antonio and elsewhere told us they’ve been getting calls from constituents complaining of long wait times.

Long lines are also reported in big suburban counties like Williamson, Fort Bend, Montgomery, Collin, and Denton. Those places, it is worth noting, saw some of the biggest surges in Democratic turnout during the primary this year.


Indeed, that was this blogger's experience.


And then there's this:


So far, 43,593 votes have been processed in #HarrisCounty. It’s only 2:26 PM. That’s already about twice as many votes as we usually see on the entire first day of early voting during midterm elections. https://t.co/LEzoeLKTia #abc13 pic.twitter.com/IIkOzKVwfq
— Pooja Lodhia (@PoojaOnTV) October 22, 2018

Here's a few of the best of the lefty blog posts and news from last week ...

Abby Livingston at the TexTrib asked the $64,000 question: Will Trump's Houston rally for Cruz motivate Republicans -- or Democrats?

SocraticGadfly, collating and expanding on several previous posts and Twitter interactions, explained why he plans to undervote the U.S. Senate race.

Stace at Dos Centavos got what he wanted in a Beto O'Rourke immigration ad.  In fact, Beto hit Cruz pretty hard.

In covering the final debate between the two US Senate combatants, PDiddie at Brains and Eggs saw Whataburger defeat White Castle in a split decision.  And Juanita Jean at the World's Most Dangerous Beauty Salon named her favorite moment from the Cruz-O'Rourke debate.

Forrest Wilder at the Texas Observer will be looking to see if Lupe Valdez's performance against Greg Abbott is a good test of the strength of the 'Beto effect'.

Off the Kuff published an interview with Kim Olson, the Democratic candidate for Ag Commissioner.

Grits for Breakfast has an election season podcast posted, and within that some excerpts from the Dallas County DA's debate.

The late Anthony Bourdain visited Marfa and Big Bend in some of the last 'Parts Unknown' stops, and asked residents there about the border wall.


Build a wall? Not everyone in Texas is on board. Journey into Far West Texas with #Bourdain on an all-new #PartsUnknown, Sunday at 9p ET/PT on CNN pic.twitter.com/mPatMPsXry
— CNN (@CNN) October 21, 2018

Better Texas Blog wrote about the staggering unfairness of the state tax system.

Millard Fillmore's Bathtub posted about Scout campfires and their role in the BSA's Order of the Arrow program. 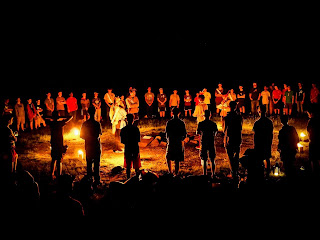 And Harry Hamid has part 617 of the further adventures of George Soros.
Posted by PDiddie at Monday, October 22, 2018