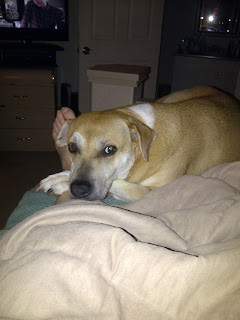 Her kidneys were failing, and we ended her suffering yesterday morning.

She came to us in January of 2012 via the wonderful people at Barrio Dogs (please foster, adopt, or contribute), after they were able to rescue her from a pile of boxes in front of an East End house that had burned.  She was waiting for her people to come back, but they weren't.

They had tried several times to catch her, luring her with food; in retrospect, knowing her as the most food-motivated dog ever, it seemed incredible that multiple capture attempts were needed.  They had documented the effort on their Facebook page over the course of several days, which is how I came to decide that I/we would like to get involved.  This period of time, right around Christmas 2011 -- thus her name -- was frightfully cold, with temps dropping into the low 20's over consecutive nights.  When they finally managed to get her, they took her directly to the vet and determined she was high-positive for heartworms.  The doctor told them she might not have survived another cold night.  She's the only dog I ever heard of that had to have two shots; one to kill the adult heartworms, and another shot 30 days later to kill the microfilaria, or the baby heartworms born when the parents die.

We were going to just foster her, but became known in the parlance as 'foster failures'.

When she first came to live with us, she curled up on the welcome mat just inside the front door.  I encouraged her to get on the ottoman in the den, and eventually she made herself at home on any piece of furniture she chose, without reprimand.  Mostly she stayed or slept wherever I was.  She was my dog; she liked everybody, there were no strangers to her, but she preferred men.  And especially me.  (All of my other dogs like my wife's company better.)

She had a joie de vivre unlike any dog I ever owned.  She would sometimes just jump out of sheer pleasure.  Not at a person but up in the air, when nobody (but me) was watching.  And she verbalized her joy; barking twice when I asked if she wanted to "peedle", or if she was ready for breakfast or supper.  'Car ride' elicited a stream of excited yips and warblings from the time we reached for her collar all the way to returning home.  She was so constantly loud on the rides it was stress-inducing.  If Mrs. Diddie and I began a conversation at the dining room table, Holly would invariably join us, climbing up on a chair as if to listen better.  Similarly, when we boarded our pack at the kennel upon leaving town, the staff invariably adored her little chatterings while she took to the handlers, especially the guys, charming them all.

A few weeks ago she strained something in her back jumping from the bed to the floor, and we gave her some meds prescribed by the vet, which helped her pain.  But within a couple of weeks she began to lose her appetite and became listless; she stopped speaking at all.  Blood tests confirmed the worst, and we chose not to prolong her misery.

My family had many dogs throughout my life growing up, and one or two as a boy that were mine, close to me.  But after I left home for college, and until we got our first puppy about thirteen years ago, a span of about thirty years passed between my canine ownership periods.

I was hoping that by writing this post, I would get to some healing place.  Not yet.  My heart remains shattered by her departure.  The Bible says that dogs cannot go to heaven, which only reinforces my atheism.  As Will Rogers said: "If all dogs DON'T go to heaven, I want to go where they went."

Me too, Will, and I sure hope my little Holly is waiting there for me.
Posted by PDiddie at Sunday, October 21, 2018