I would pay to see that fight

Greg Abbott v. Vlad Putin, in a leg-wrestling contest as part of a decathlon of 'World's Most Powerful Dictator' events.  On pay-per-view.  What should the Vegas line should be? 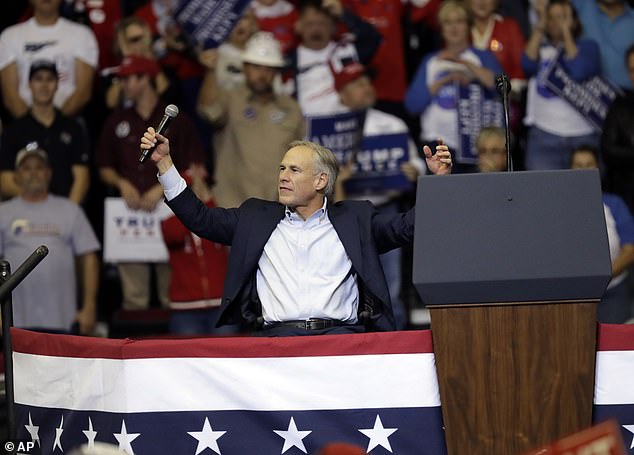 At a rally on Monday night, the governor of Texas declared himself 'more powerful' than Russian President Vladimir Putin.

Greg Abbott was warming up the crowd for President Donald Trump at the Toyota Center in Houston when he bragged that his state's economy is the tenth-biggest economy on the planet.

"That makes me more powerful than Putin!" he boasted to applause.


You might be forgiven if you thought this was going to be a rally for 'Beautiful Ted' Cruz.

Now perhaps General Abbott and his Army were simply volunteering for service in the War on Russian voter electoral fraud.  In Trump's one-hour and eighteen-minute address to the faithful last evening -- Senator White Castle only spoke for thirteen minutes; your clearest tell he was an afterthought -- Our Greatest President Ever did not mention scrapping the intermediate nuclear missile treaty that is provoking tension with his Kremlin BFF (or so both Fox and  Democrats keep telling us.  He did repeat some fake news about a middle class tax cut before Election Day.)

But I don't want to digress from our Dear Paraplegic Leader's boast.

Let's give the Guv some credit for maintaining an ideal body weight and trim figure after all these years off his feet.  Isn't it remarkable how many calories a man can burn being a total sociopath?  He might not have been nimble enough to avoid being struck by a falling tree when he was young, but in the decades since, he's carefully watched his diet and has no discernible middle-age paunch.  I would hazard a guess that's without being able to do any sit-ups.  I'll also bet that he can take a body blow from the Russian Bear if they decide to spar a few rounds.

Who do you think wins in a 90-second lightning round fundraising competition?  We can ask Charles Kuffner to be the judge of the campaign finance reports.

Probably no distance running, but a 50-yard dash/roll could be interesting.  Gymnastics, like those Olympic rings or parallel bars, or better yet, monkey bars.  A hand over hand climb gives Abbott too much of an edge, I suspect.

A pandering-to-your-millionaires faceoff would be close.  Call it Plutocratic Pugilistics.  Separate from the Money Chase above, this contest would be determined by how much you could promise to do in exchange for a government position ("Tap That Crony") or a relaxation of regulations, rather than a monetary donation.  The minimum acceptable standard would have to be Trump's own recent world record; his awarding of the South African ambassadorship to Mar-a-Lago member and handbag designer Lana Marks sets a pretty high bar for Abbott and Putin to clear.

I can't handicap this match.  Who gets home field advantage?  Is it a best of five, or seven?

This could be the almost-ultimate Battle of the Ages.  Armageddon, Jr.  World War 2.5, televised on Fox, emceed by President Reality TV, for all the Nationalist marbles.  Sponsored by the NRA (they have large and equal bets on both sides), the Southern Baptist Convention, and Super Poli-Grip.

These people will buy and swallow anything.
Posted by PDiddie at Tuesday, October 23, 2018