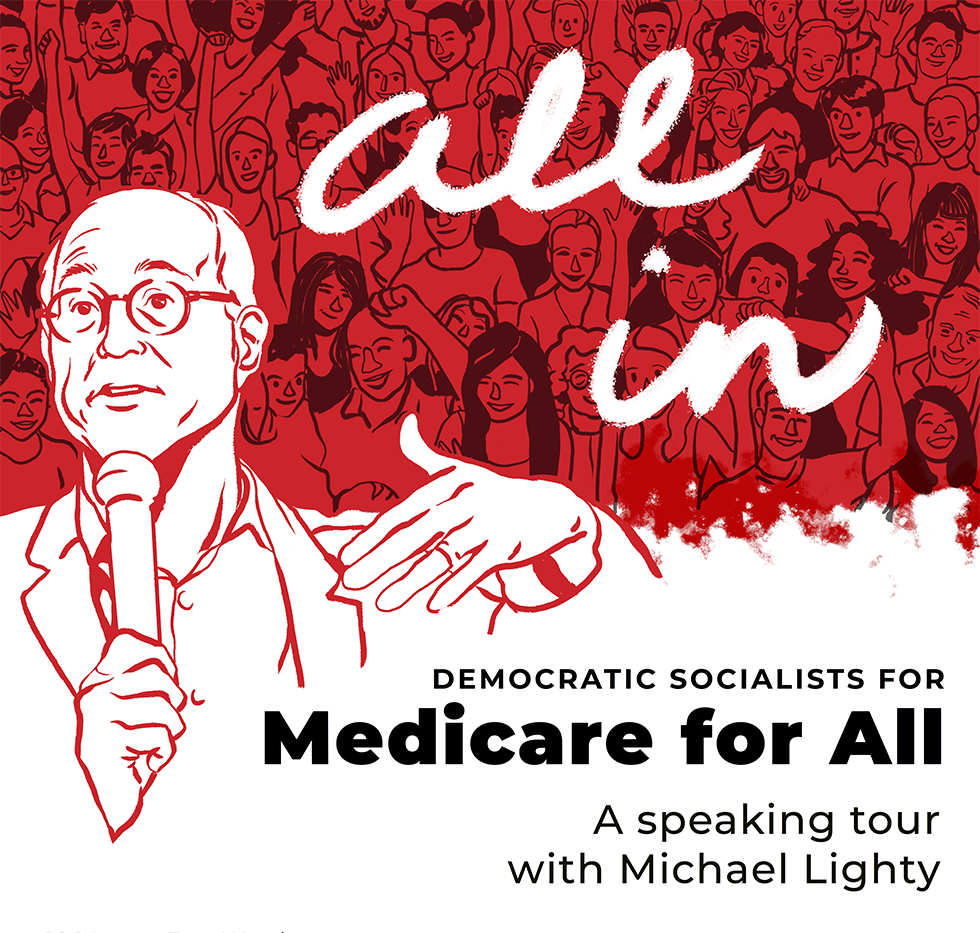 American politics is in crisis. Too many working people are seeing their wages stagnate, their retirements deferred, and their premiums rise. Medicare for All can solve the crisis in health care but more importantly it represents a transformative demand that has the potential to change American politics all together.

Long-time DSA member, Sanders Institute Fellow, and leader in the Healthy California single-payer campaign Michael Lighty will visit cities across the South and West to lecture on the current political and economic crisis, why Democratic Socialism is the answer to Trumpism and how the demand for Medicare for All has the potential to galvanize a mass working-class base in the next two years.

Join us at any one our tour stops to learn how the Democratic Socialists of America are building a movement of the working class majority to demand Medicare for All and how you can get involved!


Here are the cities and dates, with locations and times yet to be determined.

My first thoughts about this were: DSA is kicking off 2020 a little early, pressuring the Democratic Party once again to move to the left.  (Remember, it's a caucus within.)  So all of these Democratic candidates currently running as hard as they can away from Medicare for All -- like Beto O'Rourke and Lizzie Fletcher, to use two examples -- are suddenly going to be a little embarrassed on their home field in the middle of the early voting period.  They'll have to re-assert their disavowal of Medicare for All (Lizzie) or explain the reasons why they aren't supporting the existing legislation, HR 676 (still waiting for those details, Beto), which are precisely and primarily the reasons both have failed to earn my vote.

Likewise, DSA sets itself up to catch all the shit that Hillarian donuts and corncobs who are still seething over 2016 would normally be directing at the Green Party (or even non-voters).

You perhaps noticed that Bernie scored a win over Amazon just this morning on a livable wage for that company's employees.  So keep an eye out on your social medium of choice for the activists and/or candidates who acknowledge that ... and the ones who don't.  Or for that matter, the ones who would deny his efforts made the difference.  (Better working conditions and yes, better benefits need to be next, Mr. Bezos.  Also... looking at you, Walmart.)

Looking forward to attending one of these rallies.
Posted by PDiddie at Tuesday, October 02, 2018

After single-payer, and well ahead of basic income? Three weeks paid, guaranteed. I'm not asking for the four or five weeks of Europe; let's just match the three weeks of guaranteed paid vacation time Canada offers.

Would help employment more, too.