In breaking developments late last evening in the Texas House Speaker's contest, Rep. John Zerwas of Richmond -- probably the most moderate Republican in the unofficial race for the post -- announced his withdrawal.  Forty House Republicans declared their support for Angleton Republican Dennis Bonnen, who had previously told the Texas Tribune he wasn't running for the job.  There will be more news in the days ahead as Democrats are huddling today to determine their course.

And with that as an opener, the Texas Progressive Alliance wants you to be sure to encourage your like-minded friends to get to the polls this week since we know you've already voted yourself. 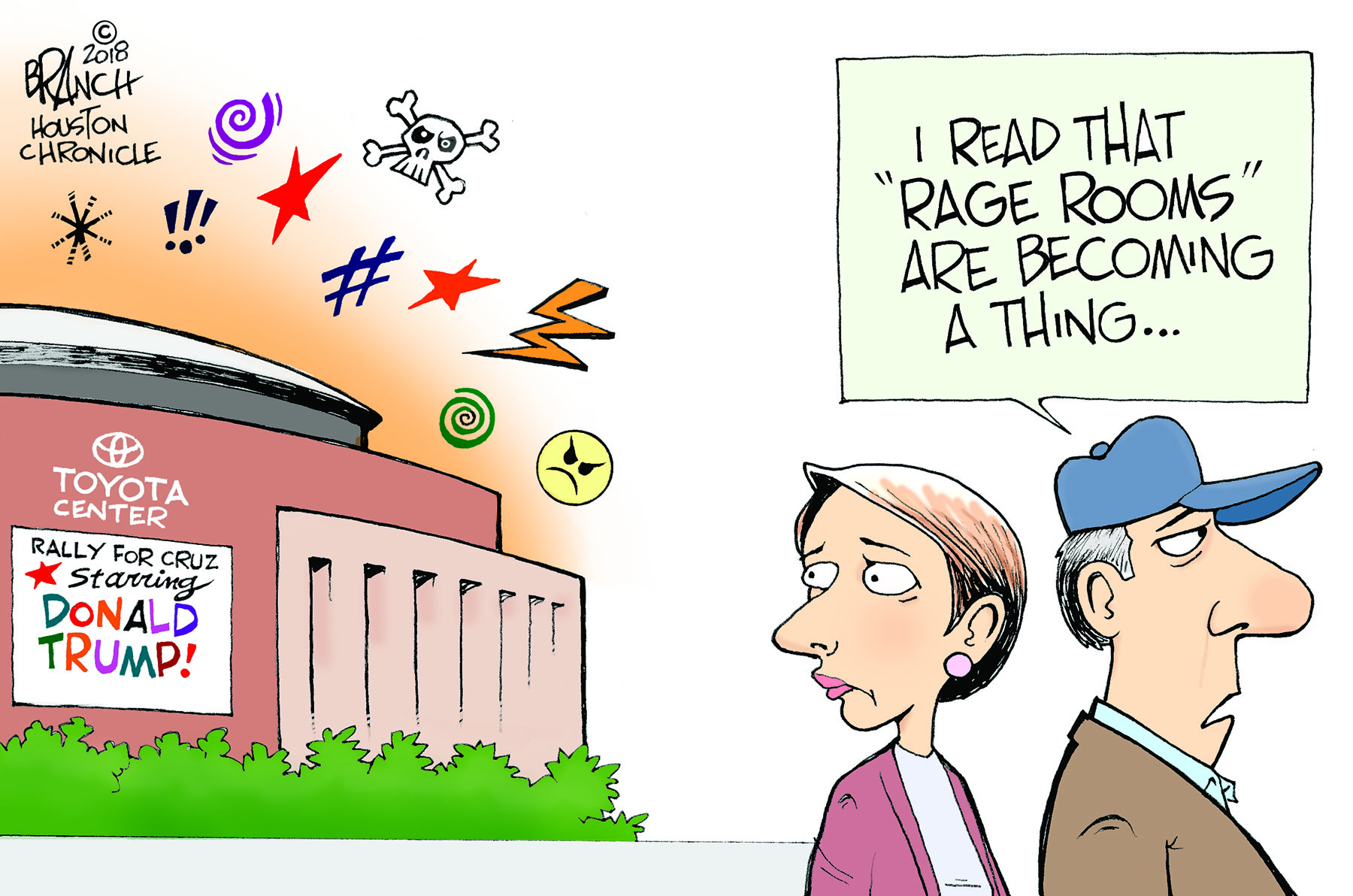 Ahead of the midterms, NPR notices that our indicted felon/state attorney general Ken Paxton gets busy chasing ghosts ramping up efforts to "combat voter fraud" (sic).

"I think it's all politically motivated," said Greg Westfall, a Texas lawyer currently representing a Hispanic woman who was charged this month with voter fraud. "If you look at the timing, that's what's breathtaking."

"The fact that there is this concerted effort in Texas to prosecute these cases to the full extent – particularly against people of color – is supremely troublesome," (Beth Stevens of the Texas Civil Rights Project) said. "And then we know what happens in Texas goes to the rest of the country as a model."

Zenén Jaimes Pérez, the communications director for the TxCRP, said the attorney general's own numbers show that his office was tackling an issue that wasn't a growing problem, as shown by the small number of cases in the many years before the crackdown.

"They have prosecuted an average of around 30 election violations since 2004," Pérez said in an email. "To be sure, the AG started the Election Integrity Initiative in without evidence of increasing elections violations," Pérez said.


Beto O'Rourke's plan to maximize the African American vote in H-Town hit high gear over the weekend, with Say Something appearances by musical artists at EV locations around town, the Souls to the Polls rallies, and other efforts accounted by Justin Miller at the Texas Observer.


Even as another 'Beto as Superman' mural was unveiled in Houston ...


... the first, in East Austin and mentioned in this 'scattershot' post from Brains and Eggs, was defaced by MAGA vandals shortly after it debuted.

Rogers’s mural has been defaced phrases like "El Paso gentrifier supports Israel" and "No hero” spray-painted onto the artwork in red and white.


Socratic Gadfly does some number-crunching on the early voting surge and offers a quick hot take on what it might mean for the Cruz-O'Rourke Senate race.

Progrexas carries the piece from the TexTrib about how the statewide judicial candidates will win or lose solely on the basis of their party affiliation. If anyone is poised to spoil (yet another GOP) sweep, it’s R.K. Sandill, a long-serving Democratic district judge in Harris County who’s consistently outraised his opponent, Justice John Devine. In addition to an impressive cash-on-hand tally, an endorsement from the Houston Chronicle and victories in the Houston Bar Association and Texas Bar Association polls, Sandill faces perhaps the most controversial incumbent on the high court. Before being elected to the high court in 2012, Devine was sued for displaying the Ten Commandments in his courtroom. Devine has also boasted publicly that he was arrested 37 times protesting outside abortion clinics.


See also this post at Brains and Eggs for the 'vulnerable, least discussed' Republican -- Presiding Judge Sharon "Killer" Keller of the Texas Court of Criminal Appeals -- if the blue wave crests high enough on November 6.

Rewire writes about how a federal court in Texas -- Judge Reed O'Connor's in the Northern District -- will shape the legal fight under way over transgender rights.

Brandon Formby at the Texas Tribune describes the collision of rural and urban values as the high speed rail line between Houston and Dallas continues to move ahead.

Think Progress has details on far-right activists and militia groups headed to the southern border to stop the caravan of Honduran migrants (that are still a thousand miles away).

Earlier (last) week, the U.S. Border Patrol warned landowners in Texas that they could expect “possible armed civilians” on their property because of the news about the caravan. The exact details of when and where the militia would deploy are unclear, but one militia leader told the Associated Press that they would have upwards of 100 members guarding the Mexico-Texas border.


David Collins added some thoughts to Nick Cooper's (he's the drummer for local band Free Radicals) about the border wall.

Stace at Dos Centavos reflected on his weekend of politics y cultura.

The TSTA Blog resorts to begging teachers to support public education at the ballot box.

Texas Standard updates the story of the city of Houston's legal tussle with Southwest Key, the operators of a proposed child detention facility on the northeast side, in reporting that the city has rejected a settlement offer from the company.

"I don't know how you walk up here and see five flags flying, the thin red line and the 13 that were injured and not understand that this is not the place to show your disdain and your vindictiveness toward Houston Firefighters," said Lancton.

At City Hall, Mayor Sylvester Turner, who is bankrolling the PAC and leading the fight against pay parity, stopped short of an apology.

"I don't know who put it there. I'm just saying whoever put it there, it's important to be respectful and not just of places, but family members as well," said Turner.


Stephen Willeford, the Sutherland Springs "good guy with a gun", is profiled by Michael J. Mooney in Texas Monthly.

Dallas City Hall has stonewalled a pair of open records requests by Downwinders at Risk regarding a mysterious clean air fund and a Joppa polluter.

Jim Schutze at the Dallas Observer thinks it's great that a rec center was renamed for Santos Rodriguez, the boy who was killed by a Dallas policeman in 1973 (updated by the Militant in this Wrangle from August).

Sanford Nowlin at the San Antonio Current reminds us that some Christians do support progressive liberal ideas and politics.

CultureMap Houston describes how 'Old Spanish Trail', aka old Highway 90 connecting El Paso, San Antonio, and Houston and built over hundred years ago missed its intended history ... but created a new one that's now old enough for us to celebrate all its own, particularly in the Alamo City.

Grits came to Houston and took in a Contemporary Arts Museum collaboration by artists about the justice system (highly recommended).

Both CNBC and The Verge covered the news about the Sam's Club in Dallas which will be a cashier-less operation, similar to the five (so far) Amazon Go stores in Seattle and Chicago.

And Harry Hamid went out for a bottle of wine at midnight, took in the 'Trose scene, and got ready to tell another story.
Posted by PDiddie at Monday, October 29, 2018

As I said on Twitter, IMO, that Texas Trib piece on high-speed rail misses the forest for the trees.

The forest is they're following the wrong route.

I hope this gets spread far and wide
https://www.houstonchronicle.com/local/gray-matters/article/How-to-fix-Texas-underfunded-schools-Dan-10593464.php?fbclid=IwAR2o6FN9ucaoJMNWvGnXK-r5qEL42Eh44xWoCRoKt697wt0cQvSSj1lu6Rk

The TexTrib's piece was a human interest take. It didn't miss anything in that regard.

Route determination, including public hearings, are long in the past at this point. What your O seems to be missing at first blush isn't just that, but also some understanding of the environmental impact statements. All six of the alternate routes follow most of the Utility Corridor (high-power electricity lines running east of 35 and mentioned in the TexTrib link), described as "the only feasible end-to-end" path, for reasons that go beyond State 6 and Interstate 35 auto traffic being disrupted by construction of the rail line.

As someone who has long lived in rural parts of East Texas, I'm a little surprised your opinion seems to advocate for the urban and suburban POV. I'd be all in favor of the Texas Central going through some non-bucolic scenery and having a few stops (even Waco) but their marketing emphasis is on competing for the business traveler with Southwest and United, and they can't do that if the train pauses a couple of times along the way.

Which reminds me: Alternative A" shows just one planned stop adjacent to Texas A&M (and also Sam Houston State, in Huntsville. Equidistant, or about 25 miles from each campus). Here's more FAQ if your reading time on this topic is limited.

Oh, I've read about HSR for years. Waco would only be one additional stop. Remember, the current plan is for a stop out in the boonies that will theoretically service College Station 20 miles away.

I know that the route determination by the current planners is set. But, that doesn't mean that I can't call a turkey a turkey, even if it's already been put in the oven.

As for spacing of stations? First, you can have express and non-express routes. Second, to be the anti-Greg Abbott and say, Hey, California! the Cal HSR plans have stations fairly close together. See map near end of story.

Then you don't seem to be learning much from what you're reading.

There's just going to be the one stop.

Unless you got some comments into the public record, this is just you 'fallaciously appealing to yourself as an authority', i.e., you being a pompous windbag again, except on my blog instead of Twitter.

And if you think I'm going to tolerate that for as long as I did on Twitter ... *shakes head*

Comments from you on this topic are now spam. Move along.