From the beginning I've thought he was going to make it in and I only wavered a week ago, as Dr. Ford's testimony moved me emotionally ... and the nominee's stunned.  It only took a few hours, though, and the psychotic rant of Lindsey Graham -- and the Republican base's high-fiving and 'owning the libs' -- to bring me back to Trumpworld reality.  Not even Jeff Flake forcing the FBI (whitewash of an) investigation re-changed my mind.

This whip count from Dustin Rowles at Pajiba makes a little sense. 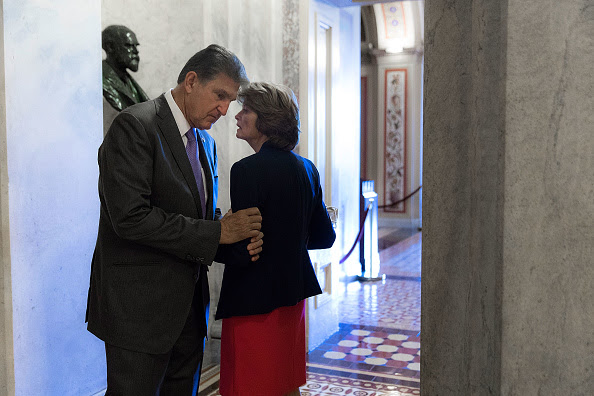 Look: It’s all going to come down to a handful of people. I don’t know how it’s going to go, but my guess is this: Democrat Joe Manchin will flip and vote for Kavanaugh (it’s what his West Virginia constituents would want, and he’s got a sizable lead in the polls, so he’s not worried about being voted out either way). Manchin’s vote will give Susan Collins and Lisa Murkowski cover to vote against Kavanaugh (as their Alaska and Maine constituents want), and it will come down to Jeff Flake, who ultimately will vote for Kavanaugh, providing the GOP with 50 votes. Pence will break the tie. Kavanaugh will be confirmed. There will be another Women’s March like gathering before the midterms, and the GOP will pay for it at the ballot box, although it won’t stop Brett Kavanaugh from repealing Roe v. Wade.


What's missing here is Heitkamp from North Dakota -- losing badly in the polling for re-election -- voting for Kavanaugh.  Joe Donnelly of Indiana is making progress but it's still close; he'll vote 'yes' to reinforce that small lead.  Tester of Montana could be a 'no' on Kavanaugh but will likely be an 'aye' as Trump's visits to Big Sky country and the mood of voters there shows some tightening.  These three Blue Dogs give Flake an opportunity to flake out and vote no, and Bitch McConnell still would not need Pence's tie-breaker.

Update: And with this news, it won't even be that close.


Given her polling, it's a very brave vote because it probably dooms her re-election fate.  That would give the GOP a flip in the Senate.  And unless Heitkamp is joined by a few other hardy souls, I don't see how it -- or the mass protests inside the Hart Senate office building happening this afternoon -- changes the final outcome.

Update III: Tester and Donnelly are both no votes.  That leaves an unofficial whip count at 48-48 with four -- Collins, Manchin, Murkowski, and Flake -- still on the fence (but not what I would call undecided, just undeclared).  I see but one potential 'aye' among those, and even if there were two, Pence breaks the tie.  Grassley said within the past hour that the vote will be held Saturday.

Look how fluid the situation has been just this afternoon, though.
Posted by PDiddie at Thursday, October 04, 2018

That sounds about right. he makes it with Democratic votes that no one is thinking much about.

The idea that John Roberts is about to become the swing vote on the Supreme Court is frightening.