A few events and a few developments (not Kavanaugh-related)

This seems to have provoked some consternation among white neoliberals concern-trolling on behalf of black Democratic voters.  There also seems to be a complete lack of awareness on their part as to the price paid for chasing Republican centrists and independent conservatives.  Now I don't give one solid shit for Barack Obama or his policies or his endorsements, as you all should know; I just find it highly amusing that establishment Democrats remain this clueless.

(If you think Obama didn't call these folks to make sure they would accept his stamp of approval ... I have a bridge to sell you.)

O'Rourke is under stress to go negative from his supporters, who are being scared by Ted Cruz's onslaught of negative teevee advertising against the Democrat.  We're way beyond yard sign wars.  Lying and smearing were always going to be what Cruz does because that's who he is.

That was a tactic that failed repeatedly before.  Maybe not any longer.

His campaign is now consumed with shaping Beto O’Rourke as the embodiment of  a uniquely dangerous and unhinged opposition. Despite his warm and fuzzy rhetoric, Cruz insists that the El Paso congressman, much like Obama, is a radical. In fact, Cruz says, he’s further left than Nancy Pelosi, Elizabeth Warren and even Bernie Sanders.

In Cruz’s portrayal, O’Rourke is a gun-grabbing tax-hiker who wants to abolish ICE, open the borders, legalize narcotics and obstruct Trump. And he wants senior citizens’ crown jewel — Medicare — to become fully socialized.

Heading into the final stretch, Cruz has dialed up his extremist caricature of O’Rourke with the explicit intent of scaring the bejeezus out of old, white and conservative Texans — the bedrock of a typical midterm electorate. His campaign, along with a battalion of billionaire-backed super PACs, has unleashed a barrage of attack ads. The offensive has included a Willie Horton-style ad falsely claiming that O’Rourke supports decriminalizing illegal border crossings; the ad features mugshots of undocumented immigrants who repeatedly crossed the border and committed heinous crimes.

In one of the most heated moments during their first debate, Cruz lashed out at O’Rourke, twisting recent comments he made about how the criminal justice system has become “the new Jim Crow” into an attack on police officers. Asked whether he’s concerned about police violence against unarmed black people, Cruz gave a perfunctory response about his concern for all people’s rights (echoing the “All Lives Matter” line). Then, with a somber tone that crescendoed into indignation, he said he’d been to too many police officer funerals because of the “irresponsible, hateful rhetoric” that he accused O’Rourke of using.


The black vote shouldn't be staying home or skipping his line because Beto is too afraid to take Obama's endorsement.  But they might.  Just sayin'.

There's some rumoring among the elite set that polls are starting to break Cruz's way.  I suppose we will see by Monday or so.  In the meantime, Henson and Blank at the Texas Politics Project have slightly updated their 9/12 blog post, excerpted and linked here, and posted it at The Conversation, changing the headline to "Beto won't beat Ted".

-- It's the last weekend to get people registered to cast a ballot in November.  Who's showing up at this event?  Stace is going to be taking pictures, you know.

-- This event today is important for our local homeless veterans.

-- At ten this morning, a press conference will be held at the Harris County Civil Courthouse, 201 Caroline,  regarding Ken Paxton's three-year-old indictment and stalled prosecution. 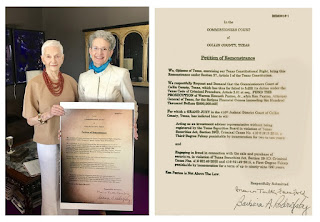 A group of concerned citizens, led by long-time civic activists Barbara Ann Radnofsky and the Honorable Frances “Sissy” Farenthold, is presenting a “Petition of Remonstrance” compelling the authorities to move forward with the criminal prosecution of indicted Texas Attorney General Ken Paxton for securities fraud.

The case, which includes three felony indictments brought against Mr. Paxton by a Texas Grand Jury more than three years ago, has been stalled due to politically-motivated constraints on funding of the court-appointed prosecution.

A Petition of Remonstrance has been drafted and signed, urging the authorities to remove all obstacles to trial and allowing justice to take its course. Radnofsky explains that “a Petition of Remonstrance is an established channel for citizens to express grievances under the Texas Constitution. It’s older than the Republic of Texas, and we are giving it new life. This Remonstrance will also be presented to the Collin County Commissioners Court. They have a legally-recognized duty under Texas law to ‘stop, look and listen’ to this Remonstrance.”


A video explaining the petition is here.

The Texas Observer has written a revealing piece about how the extremists in Paxton's home county have not only shielded him but martyred him in this regard.  Read the 11-count Tweet thread for a summary if your time is short at the moment.  And then give a hand to Justin Nelson.

More events you should know about this weekend will be posted tomorrow morning.
Posted by PDiddie at Friday, October 05, 2018

Thot you might have taken time off to go to the Paxton deal yourself.

Saw the Beto deal. I'd blogged a week or two ago about national Dems and him, and wondered then already if this wasn't his choice, as now appears to be the case.

And, I think he's wrong. Obama is the "Big Dog" with the Clintons both fading from the scene.

He could not accept Obama's endorsement and continue to claim this "independent" status, i.e. pandering to conservative crossovers.

He's rallying with Arian Foster and Bun B and several others in Houston on Monday, suggesting he's chasing the young black vote, less so their more conservative (Obama-worshipping) parents. More on that later.

I'll stand by for your follow-up. And, I have for some time figured the same as you on why Beto-Bob didn't want the Big O endorsement.

Oh, dunno if you saw my Tweets yesterday, but The Nation has now guzzled the Beto Kool-Aid, with John Nichols (who I loathe more and more) claiming he's pro-single payer blah blah blah. I'll have something on that Monday.