The Texas Progressive Alliance is more familiar with the word "emolument" than ever before as it brings you this week's roundup. 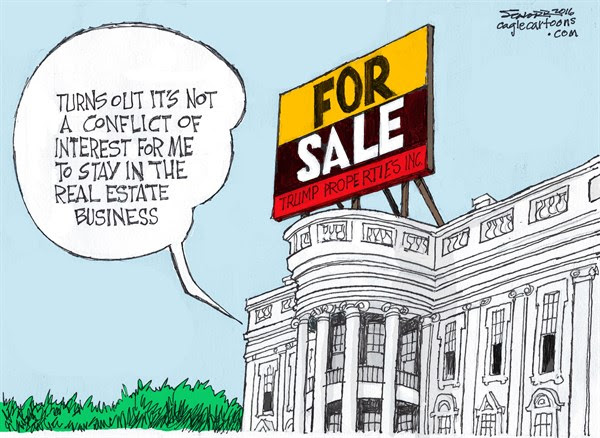 Off the Kuff looks at statewide judicial race results by State Rep district in Harris County.

Libby Shaw at Daily Kos agrees with Donald Trump. The election is rigged. On his behalf. Thanks to the Electoral College. Why I refuse to sit down, shut up and get over it.

Ted at jobsanger also joins the cacophony of whining about the EC.

Socratic Gadfly takes a critical look at Jill Stein's vote recount push, and while noting it's noble, finds a number of problems, mainly with the likely Clinton-loving professor who pushed for it in the first place.

CouldBeTrue of South Texas Chisme is appalled that Henry Cuellar is one of 18 Democrats in the US House refusing to denounce Stephen Bannon, the white nationalist who is Trump's pick for chief strategist.

The Lewisville High School theatre department will present "The Laramie Project", a retelling of the life and death of Matthew Shepard, December 1-3, according to the Texan-Journal.

The death of Fidel Castro was the latest of seminal 2016 moments, but no more so than for Mrs. Diddie, whose stories of leaving Cuba in the arms of her parents in 1962 were retold for another generation by PDiddie at Brains and Eggs.

Neil at All People Have Value went to Galveston on Thanksgiving Day and posted a nice picture of the beach. APHV is part of NeilAquino.com.

Kevin Diaz at the SAEN, via Sayfie Review Texas, reports that US Rep. Kevin Brady will be Congress' and the Trump administration's point man in replacing the Affordable Care Act.

The Rivard Report calls our attention to a few more education bills filed in the Texas Senate for next year's legislative session.

The Bloggess explains her strategy for surviving family get-togethers.

The Texas Election Law Blog reviews the case for a presidential recount.

Grits for Breakfast marvels anew at the way some members of our Court of Criminal Appeals operate.

In her first-ever concert in Texas, CultureMap Houston heard Barbra Streisand mix in some thoughts on barbecue and politics between songs.

And returning after a year-long hiatus, Fascist Dyke Motors reveals that she shot William Burroughs.
Posted by PDiddie at Monday, November 28, 2016