The Texas Progressive Alliance ruefully observes that Giant Meteor 2016 really did win the election, and has some trepidation about the fallout for the next four years. 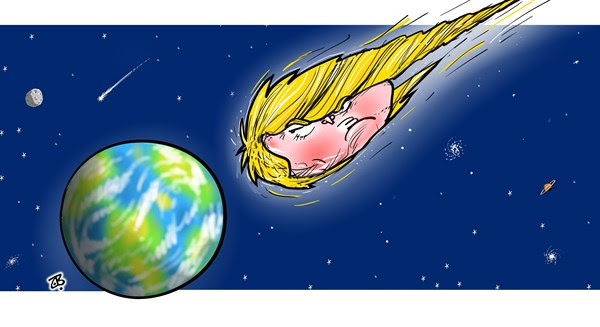 Off the Kuff reminds us again that climate change is not going to be kind to Houston.

Socratic Gadfly analyzes the election and offers up a Clinton post-mortem, along with one for the Democratic Party. (He'll have a Green Party post-mortem later this week.)

South Texas Chisme passes along the news that a Border Patrol agent has been caught lying about narcotics confiscation. The war on drugs leads to public corruption.

A post-election to-do-list was posted on Election Day by PDiddie at Brains and Eggs, and one item on it -- stopping the Trans-Pacific Partnership -- has already been checked off.

Neil at All People Have Value points out the distinctions between Trump's voters and Trump with respect to racism. AHPV is a part of NeilAquino.com.

The Lewisville Texan Journal editorialized against the Electoral College.

jobsanger says that the onus to fix the US economy is now squarely on the GOP.

And John Coby at Bay Area Houston is still a little sore at people who voted for Trump, and Egberto Willies is only slightly recovered from an election result nobody saw coming.

More Texas news for columnists and bloggers from around the state!

The Dallas News notes Trump's stated intent to overturn the Supreme Court's long-established precedent on a woman's right to choose, and the Austin American Statesman sees the widening rural/urban divide exposed by the 2016 election.

The San Antonio Express-News finds a bright spot: after years of flux, the city's statehouse delegation is finally set for 2017's legislative session.

Texans for Public Justice has a new report (.pdf) about the Texas Railroad Commissioners and candidates who are awash in cash from the oil and gas industry.

The Texas Observer went to a rally for Austin's immigrant rights activists, and the message was "Don't Mess with Texas' families."

The Digital Heretic finds that liberals slamming evangelical support of Trump are exercising another shameful and myopic attempt to set themselves above those who elected him.

The Somervell County Salon found her county's election results and noted that she was one of 23 who voted for Jill Stein.  And DBC Green has some interesting statistics that compare TXRRC candidate Martina Salinas' votes with Stein's from various Texas counties.

Zachery Taylor thought Donna Brazile's lapses in ethics and integrity were problematic, but trivial in the grand scheme.