Harris County still looking blue, Texas not so much

Once again, Tom Gederberg via SD17 Democrats on Facebook.

There is a lag in getting the data loaded into VAN. VAN currently has data on 576,983 early voters and on 80,820 mail voters. Assuming that people who have a 2016 DNC Dem Party Support v2 score of over 50% is a likely Democrat and those with a score below 50% is a likely Republican, here is how the voting looks in Harris County so far:


EVIP this week in Harris County (early voting in person, more formally called EVPA, or Early Voting by Personal Appearance) is lagging last week's eye-popping numbers, but is still surging past 2012 and 2008.  In local media reax, Groogan at Fox swallows Mark Jones' spin and pimps for Team Red, while the Chron's article underscoring stronger Democratic turnout reveals that the EV numbers seem to show more of a partisan groundswell than they do new voters.

By both comparison and contrast, the state's fifteen largest counties show gains, but the red counties look to be voting a little heavier.  The most recent Texas poll reveals Trump ahead by 12, and above the 50% mark for the first time (click for a clearer pic, or go to the link). 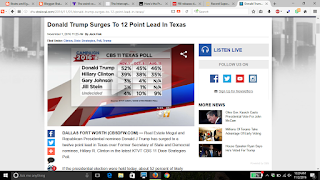 So while the Donks still have bright prospects for downballot races locally, I would have to say to Democrats dreaming of turning Texas blue -- and especially to some of those laughably bad statewide judicials: wake up and smell the coffee.
Posted by PDiddie at Wednesday, November 02, 2016