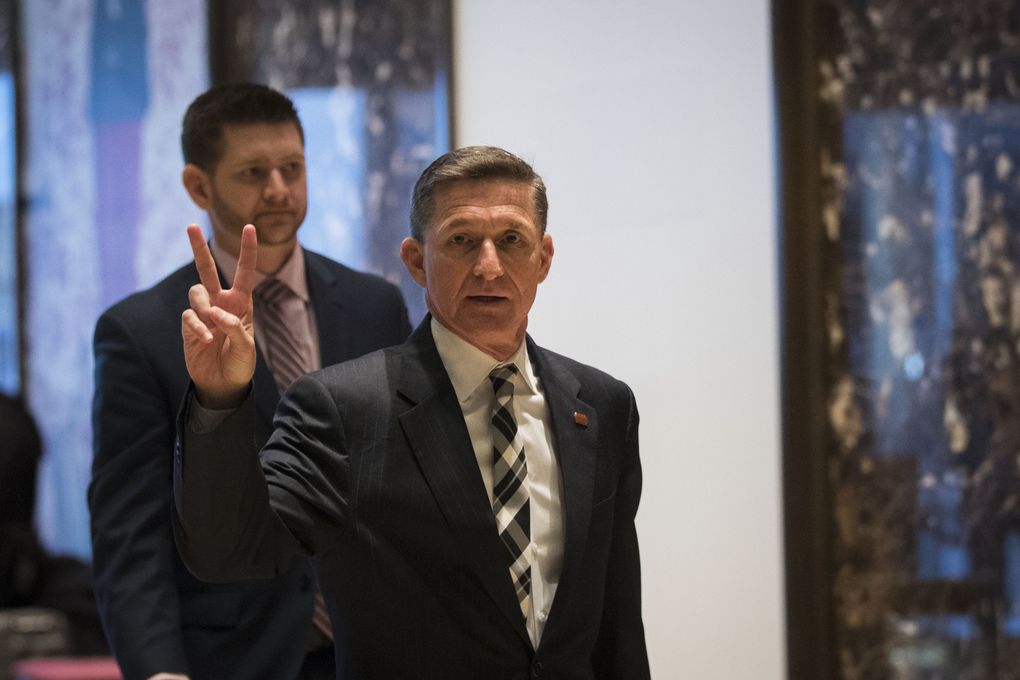 Retired Army Lt. Gen. Michael Flynn was fired from his last job in the military, sat next to Russian President Vladimir Putin after giving a paid speech in Moscow, called for Hillary Clinton to be imprisoned, and said President Obama was a “liar” with no plan for defeating ISIS.

As of Thursday, there’s something new to say about him: Flynn will be moving into the West Wing as President-elect Donald Trump’s national security adviser.

Flynn’s relationship with his overseas clients is coming in for new scrutiny amid recent disclosures that two months ago, during the height of the presidential campaign, his consulting firm, the Flynn Intel Group, registered to lobby for a Dutch company owned by a wealthy Turkish businessman close to President Recep Tayyip Erdogan of Turkey.

More from the link embedded in the graf above:

... Kamil Ekim Alptekin, a Turkish businessman with real estate, aerospace, and consulting interests, told The Intercept on Thursday that one of his companies, Inovo BV, paid Flynn’s company “tens of thousands of dollars” for analysis on world affairs. On election day, Flynn published an opinion piece for The Hill urging U.S. support for Turkey’s controversial strongman president, Recep Tayyip Erdogan, and pushing for the extradition of Erdogan’s political rival, Fethullah Gülen, who now resides in Pennsylvania. “From Turkey’s point of view, Washington is harboring Turkey’s Osama bin Laden,” Flynn wrote, on Nov. 8.

This is what draining the swamp looks like.  At least we might not get into a war with Russia (beyond our current proxy one in Syria, that is), but the drone bombing and assassinations will continue until morale improves, despite Flynn's stated opposition.  He has said in the past that the they create more terrorists than they eliminate (shockingly, Flynn is correct about that).

So Trump’s almost inevitable string of drone murders will be conducted under the guidance of a man who knows they produce terrorism rather than reducing it, that they endanger the United States rather than protecting it. In that assessment, he agrees with the vast majority of Americans who believe that the wars of the past 15 years have made the United States less safe, which is the view of numerous other experts as well.

Flynn also advocates for torture and indefinite detention but is conflicted about its 'productivity'.  There are certain inconvenient truths about what Flynn gets right -- in blind hog/acorn fashion -- and what he gets wildly wrong.  Colin Powell did not mince words about Flynn in a leaked DNC email (aren't we glad now we have those?).

“I spoke at DIA last month,” the former secretary of state wrote in a hacked email released this summer. “Flynn got fired as head of DIA. His replacement is a black Marine 3-star. I asked why Flynn got fired. Abusive with staff, didn’t listen, worked against policy, bad management, etc. He has been and was right-wing nutty every [sic] since.”

Flynn could have been vice-president, you may recall, but he's in a position to do much greater damage now.  The only thing he seems to lack is a family connection, like Jared Kushner.  There's a reason why James Clapper pulled the chain yesterday.

In 2014, two years into what was supposed to be a three-year term, Flynn was summoned to the Pentagon by Director of National Intelligence James Clapper and then-Undersecretary of Defense for Intelligence Michael Vickers and told that he was being removed from his post.

Vickers was a central character in the book and film Charlie Wilson's War, you might remember.

According to the Washington Post, Flynn tried to salvage his job by sidestepping his superior officers and making a direct appeal to the vice chief of the Army. When Clapper found out, he warned Flynn that he would fire him on the spot if Flynn made another attempt to do an end-run around his bosses, according to the newspaper.

Your seat backs and tray tables need to be locked in the upright position.
Posted by PDiddie at Friday, November 18, 2016