When checkers is too tough for your opponents. 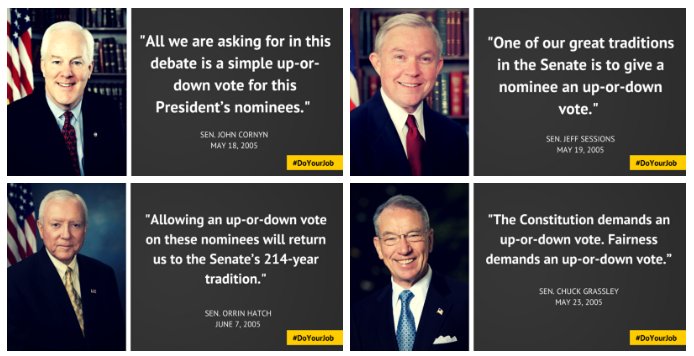 My favorite of all was LDS Bishop Hatch saying this ...


... and then Jake Tapper elbowed the Utahn in the teeth with this:


Even when you consider the mean IQ of these Republickin pigs running the Senate, Judge Garland is still a sacrificial lamb to the politics of the extremists.

Judge Merrick Garland of the U.S. Court of Appeals for the Washington D.C. Circuit will most likely not become Justice Merrick Garland of the Supreme Court, at least not while President Barack Obama remains in office. He seems unlikely to get even a hearing before the Senate Judiciary Committee, or a vote either by that panel or the whole Senate.

And it may be partly because it’s hard to imagine an Obama nominee more likely to win confirmation, if the Republicans allowed a vote.


He wouldn't have been my choice, but as when Antonin Scalia asked for Elena Kagan in 2009 (he got Sonia Sotomayor that year and Kagan in 2010) the opinion of the current SCOTUS judges as to who might be worthy to join them is apparently given serious consideration.

So respected is Garland as a judge that Chief Justice Roberts, at his confirmation hearing (in 2005), answered a question about one of his majority opinions by noting that Judge Garland had dissented and, said Roberts, "Anytime Judge Garland disagrees, you know you're in a difficult area."

(T)he pitched political battle over Garland’s fate could turn in unexpected ways, and will shape – and be shaped by – the 2016 race: Not just Donald Trump’s unprecedented presidential bid but the fight to control the Senate, in which a platoon of Senate Republicans are facing stiff challenges.

Garland’s nomination would need 14 Republicans to disrupt an inevitable filibuster, and five to be confirmed. Even if (SML Mitch) McConnell had not drawn that early line in the sand, that would not have been easy, but it would not have been impossible, and surely would have carried shorter odds than if Obama had chosen a nominee closer to the base of the Democratic party. Put differently, there would be comparatively little political danger to the GOP in considering, and rejecting a liberal firebrand, even one plucked from the ranks of women or minorities.

For the Republican base, the issue is even more stark: it’s not just a question of how Garland would vote, it’s their refusal to countenance handing Obama any sort of victory. Polls conducted before Garland’s nomination found nearly seven in ten Republicans saying Obama shouldn’t even try to fill the seat.

Republican National Committee Chairman Reince Priebus captured the two notions – the court’s potential shift, anger at Obama – on Twitter. “We won’t stand by while Obama attempts to install a liberal majority on #SCOTUS to undermine our Constitution & protect his lawless actions,” he said.

Overlook the misuse of the definition of the word 'lawless' here; this is the expiring establishment GOP making one last symbolic stand for their rebel base.  There's a little more back-and-forth at the link about whether McConnell will fold, whether the Republican senators on the verge of being swept out of office in a blue wave will convince him to at least hold a hearing, even if it's to turn down the best nominee suited to their philosophy they will ever get.

Obama's already standing at the finish line while they are lacing up their shoes.

“We have forced them into a telescoping series of untenable positions, where even agreeing to meet with the guy is a cave in the view of their base,” said a senior Democratic congressional aide.

“It’s a win-win situation. Either we get the confirmation, and change the balance of the court for a generation, or they have to fight to November defending the most extreme, untenable position of no-votes, and we’ll annihilate them on that,” the aide said. “And then President Clinton nominates” Scalia’s successor.

So, the aide said, “I don’t care if McConnell caves or not.”