A few predictions for tomorrow

I've previously forecast that March 1 -- and then March 15 -- would be the day of reckoning for Bernie Sanders and his erstwhile presidential campaign.  I have to extend the deadline further out for that because he continues to rise in the polling, even as Hillary Clinton keeps shooting herself in the foot, the one which also happens to be in her mouth. 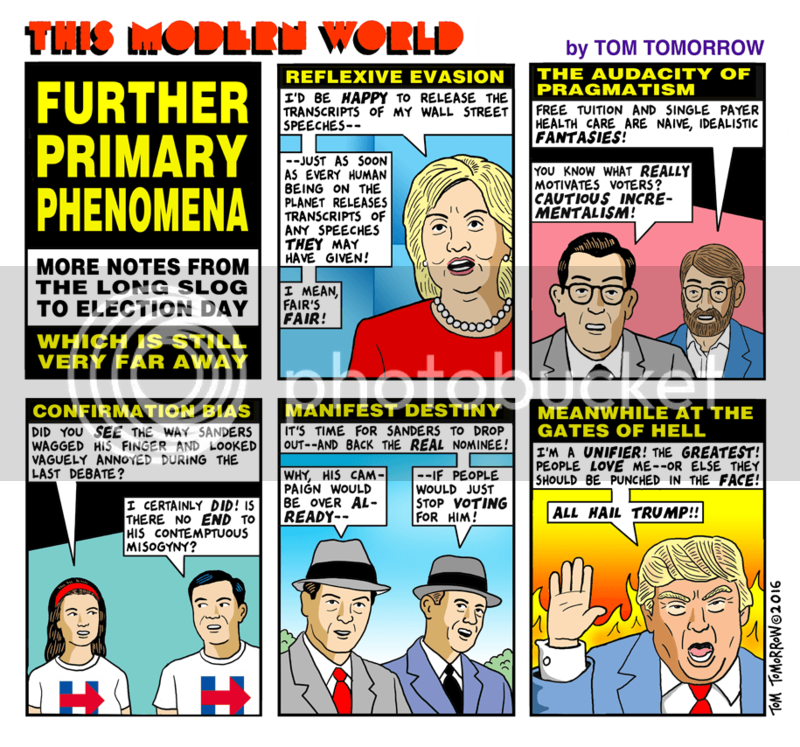 New Public Policy Polling surveys of the 5 states that will vote on Tuesday find that the Democratic contests in Illinois, Missouri, and Ohio are all toss ups, while Hillary Clinton maintains a significant advantage in Florida and North Carolina. [...]

Clinton leads Bernie Sanders just 46/41 in Ohio and 48/45 in Illinois, while narrowly trailing Sanders in Missouri 47/46. Ohio, Illinois, and Missouri are all open primary states and Sanders is benefiting from significant support from independent voters and a small swath of Republicans planning to vote in each state, putting him in position to potentially pull an upset sweep of the region on Tuesday night ...


The race is going to go on for some time; more debates and town hall fora should ultimately be on tap despite resistance from the buffoonish Debbie Wasserman Schultz, and the primary schedule is somewhat lighter ahead, with more states moving to 'winner take all' upping the ante.

And the polling could be askew, as it was in Michigan.

Here's what we know: down by 37 in Illinois just five days ago, Sanders is now up by two according to CBS News; down by 30 in Ohio five days ago, Sanders is now down by only single digits; the only polling in Missouri has Sanders in a statistical dead heat with Clinton, per the poll's margin of error; and while the polling in Florida at first blush seems less favorable -- Sanders has "only" cut 17 points off Clinton's 45-point lead in the last 48 hours, according to CBS News -- the Sanders campaign reports its internal polling shows a race in the high single-digits, and given that this internal data turned out to be correct in Michigan, it seems we should all be paying it some mind.


Go read more there as Clinton campaign manager Robby Mook is already sounding the "we're losing!" alarm bells.  Time -- as in tomorrow evening -- will tell, but it looks as if Bernie is going to make it a race for awhile longer.  How much longer?  Won't hazard another guess.

For the Republicans, the outcome seems more certain.

Billionaire Donald Trump has slightly increased his overwhelming lead in Florida to 24 percentage points, while Sen. Marco Rubio (R-FL) looks set for a crushing defeat in his home state, according to a Quinnipiac poll released (today).

The expectation is that Rubio will drop out after he loses in Florida. If Kasich is able to pull (the upset) off in Ohio, then he will likely stay in the race for the foreseeable future. That's a problem for Ted Cruz less because Kasich will be taking stealing his delegates, but because he will be stealing his media coverage. Kasich is the only one left who hasn't gotten any time in the limelight, and Rubio dropping out sets the perfect stage for everyone to start talking about Kasich and not talking about a two-person race.

After these states cast their ballots, the calendar cools down until April 26; until then, only four states (Arizona, Utah, Wisconsin, and New York) will vote. That's a long time for a great deal of speculation about the race to occur and conspiracies theories to spread. What happens on Tuesday will go a long way towards setting the narrative of what happens over the next month.


There is no reason to believe that Trump is going to be upset, blocked, or otherwise prevented from the GOP nomination.  Not today, not tomorrow, not at the convention, brokered or not.  There is some reason to believe that Hillary Clinton will.  Everything you'll read and hear after Tuesday night will be spin about the polls or the he said/she said bullshit.  Until we have more debates or more election results, take everything with a shaker of salt.
Posted by PDiddie at Monday, March 14, 2016