"Turnout sharply up for Republicans in Harris County; down for Democrats"

“I don’t think you can excuse this kind of behavior where you just conveniently close your eyes,” Williams, who is African American, said. “In this moment, right before the SEC primary, he finds it convenient not to disavow.”

“It has particular power because so much of the anger that Donald Trump is talking about giving voice to is really anger in sort of a white populist movement,” Williams continued.

Before he even finished speaking, Williams was upbraided by his four white co-hosts.
“He disavowed him on Twitter!” Eric Bolling protested.

“Juan, you are not paying attention to the facts,” Kimberly Guilfoyle said.

The longest lecture came from Melissa Frances, who blamed the media for badgering Trump. “Now he’s been badgered repeatedly on the same front,” she said. “At the beginning of that interview we saw he said ‘I don’t support David Duke. No, no, no.’ And they kept asking him the question until they said something that can kind of be used.”

"Marco Rubio can still beat Trump, no matter what happens on Super Tuesday" 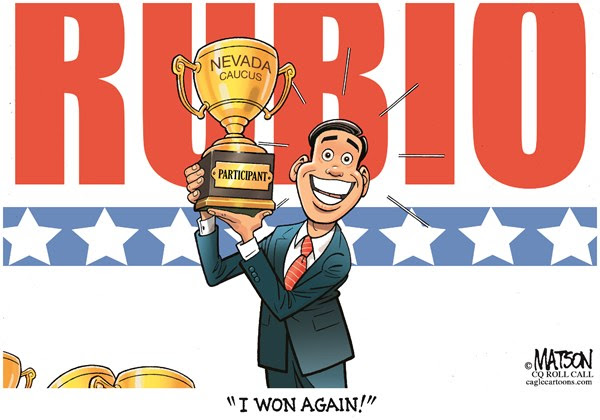 No, I don't believe so.  Just a feeling.

-- This Dump Hillary anti-establishment uprising is too little, too late.

-- Though there remain hidden time-bomblets in her email affair.

The State Department said that although there were no additional "top secret" upgrades in (yesterday)'s release, two emails had to be withheld. One was an exchange with President Obama, which is sealed until a later date under rules governing presidential records, and the other was an unclassified message that was withheld at the request of a law enforcement agency. The State Department would not comment further on the content of that message.


-- Still... can she deal Sanders the coup d'grace today?  I think he staggers on another week at least; he raised over $40 million this month from his small donor base, six of it yesterday.

-- Sanders supporters are already discussing openly on Democratic fora (it used to be verboten and grounds for banishment at the one linked) their intentions of going Green in November.

-- Here are the best video snippets of yesterday's choke-slam of a Time photographer by (allegedly) a Secret Service agent at a Trump rally.

More after the polls close... as soon as #FireStanStanart gets the EV up.
Posted by PDiddie at Tuesday, March 01, 2016

The Secret Service deal? The last two presidents, of both parties, have used "cattle pens" to control the press, and even more, control and confine protestors at events. (I was in Denver on vacation the day before the 2008 DNC started, and have seen this ... segregation ... in person.)

Juan Williams? Made his bed half a dozen years ago.

I give Sanders two more weeks and that he makes his call sometime shortly after the mini-Super Tuesday on March 15.