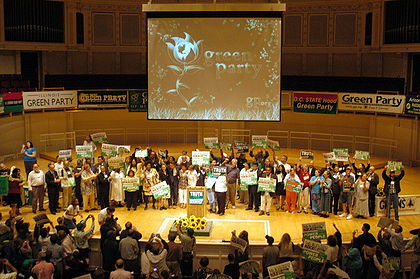 The GPTX state nominating convention will take place April 9. Voting delegates were elected at the county nominating conventions on March 19, where the party also voted to grant the Green Party nomination to candidates who will appear on the general election ballot in November. This process is similar to the major parties' primary elections, except it is done 'caucus-style'.

Delegates will also consider any resolutions brought up from the counties.

The GPTX state meeting occurs the following day -- Sunday, April 10th -- when delegates elect party officers and conduct other party business. There will be three At-Large SEC positions filled in addition to Co-Chair, Treasurer, & Secretary. If you are interested in running for one of the party officer positions, please inform the state co-chairs at the contact below so that you can be listed in the agenda packet. Nominations will be accepted at the meeting. Party-building and candidate support workshops will also be held.

Delegates from the counties to the GPTX state convention and meeting are kindly requested to RSVP for planning purposes as breakfast and lunch will be provided. There is no charge to attend the state convention, but donations to offset the costs are requested.


A full list of Green Party statewide filings can be found here.  (George Reiter, the US House candidate for District 9, and Deb Shafto, the Texas Senate District 6 nominee, withdrew from their respective races without a candidate selected to replace them.  In doing so, they cited conflicts with their positions on Houston Pacifica affiliate KPFT's local station board.  If they were to run for public office, that board's by-laws would require that they resign their posts.)

The GPUS will hold its presidential nominating convention this August at the University of Houston's main campus.  Registration -- including meals and lodging -- is open for that event.
Posted by PDiddie at Monday, March 21, 2016

Thanks for the heads-up. Will you be there?

Efforting. Wife still making slow recovery from knee replacement surgery, diabetes has claimed most of my hearing and Meneire's my mobility, but I still want to go to San Antone. I will surely be in attendance for national, locally.

If you want to take part in a Green-Party-building "round-table" tentatively set for PEARLAND, TX--with the theme "Youth, Creativity & Politics"---please contact me Maria Elena Castellanos. I was the ONLY delegate from FORT BEND County at the GPTX-2016 convention and GPTX-ANM on 4.9.16 -4.10.16. My email: CastellanosLaw1@gmail.com... Let's "grow, Greens! ". "The times, they are a changin!!'"