In presenting this week's blog post roundup, the Texas Progressive Alliance is sad that Rick Perry won't come out of retirement to run as a third-party alternative to Donald Trump. (Sad for all the missed comedy opportunities, of course.) 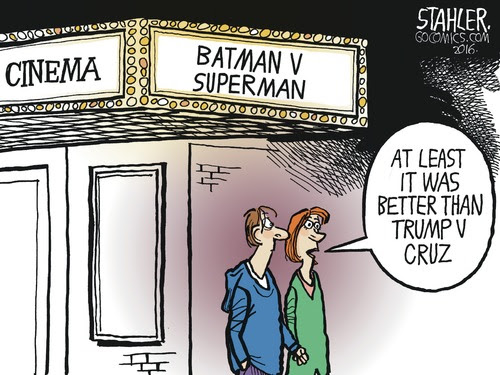 Off the Kuff would really like to see some general election polling of Texas soon.

Libby Shaw at Daily Kos exposes how the Republican Party cleverly stoles fear and hate among its religious base voters for the sole purpose of winning: How the GOP Foments Outrage and Fear Among Christian Fundamentalist Voters.

SocraticGadfly takes a deep look at the problematic background and connections of Tulsi Gabbard, the Congresswoman and former Democratic National Committee vice-chair who resigned the DNC spot to endorse Bernie Sanders.

Dan Patrick touts xenophobic, racist memes at the border while forgetting about community building trade. CouldBeTrue of South Texas Chisme notes Patrick is a Republican and that's what they stand for nowadays.

Hillary Clinton is eager to get her war on, and PDiddie at Brains and Eggs really doesn't want to go down this road again: war protests, war criminals, torture, disabled vets who can't get their VA benefits handled properly, etc. and so on.

Egberto Willies talked to an insider about why we no longer get the truth from our media: news is packaged and sold for ratings and clicks.

TXsharon at Bluedaze was at the seminar in Denton where experts from across the country said that a 100% renewable community was possible, ending the need for additional gas plants.

Dos Centavos posts some of the races and candidates he's watching in the Harris County Democratic Party's runoff election, to be held May 24.

Neil at All People Have Value encountered a Donald Trump window sticker on his travels around Houston. APHV is part of NeilAquino.com.

And the Lewisville Texan Journal had a concert review of Texas legend Jimmie Dale Gilmore and his son Colin who put on a music show locally.

In an Easter ritual where the most evil thing  is cleansed, Trail Blazers reported that Mexicans burned effigies of Trump (as 'Judas') in the streets of that country.

Grits for Breakfast revealed the business model for the company that manufactures Tasers: they also supply police bodycams and intend to be the dominant vendor in that market.

Prairie Weather points out the Democrats' forty-four-year-old paranoia, and its name is George McGovern.

Texas Election Law Blog reports that the Firth Circuit Court of Appeals in its entirety (en banc) will review the Texas voter ID lawsuit, and the plaintiffs have asked the Supreme Court to block the law from implementation in the 2016 election.

Zachery Taylor is on board the "Bernie Sanders or Jill Stein, but never Hillary Clinton" bandwagon.

Carl Davidson at The Rag Blog premises that there are actually six political parties in the United States (and that's within the two that wear the "major" label), and has some suggestions for working within them for progress.

The TSTA Blog highlights a rural school district that is trying to hang on.

The Texas Campaign for the Environment advocates for a Zero Waste plan for Houston.

The Current reminds us that SBOE candidate Mary Lou Bruner is still deranged.

Pages of Victory saw a nice dance.  A strange one, but a nice one.
Posted by PDiddie at Monday, March 28, 2016