-- The town hall format, with contestants questioned separately by the moderator and selected audience members, demonstrates again its superiority over both candidates' arm-waving and shouting from podiums.  There is no interrupting, hence there are no misused allegations of sexism (satire, yes; uncomfortably close to reality.  Not the virtual reality that dwells in the fevered minds of the SHills at Blu Koolaid Drinkers Revue).

Both candidates showed well.  Bernie stood out simply for his sincere and direct stands that go against the doctrine held by the average Fox viewer.  Hillary was grilled over Libya and her emails, as predicted, but emerged unscathed.  The Twitter responses ranged from the customary unhinged conservatives freaking out over soshulism or Benghazi or abortion -- a topic mentioned for the first time in a Democratic debate or forum -- to Republicans saying both Clinton and Sanders were their second choices after Trump, to the spinners for both blue sides working overtime.  It was one of the more diverse ideological event hashtags I've followed during this cycle.

-- Another stellar performance by him and another adequate performance by her is unlikely to move the needle in Michigan or Mississippi, both of which are casting ballots today.  There will be more calls for Sanders to pack it in when these states get called shortly after the polls close tonight, but with Florida, Illinois, Missouri, North Carolina, and Ohio all on deck to vote next Tuesday, no verdict will be rendered on his campaign's fate before then.

But it shouldn't be long after that.

Update: Mark Kleiman is ready to sign the death certificate.

-- Debate night is Wednesday in Miami with Amazon's Washington Post and Univision moderating.  The WaPo has made no secret of its Hillary bias. 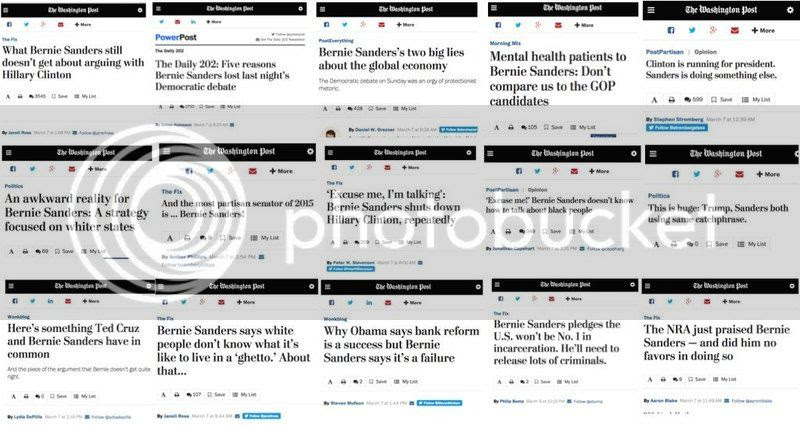 Bezos is a tech-neoliberal/libertarian bazillionaire. Of course he loves him some Hillary. Don't forget the Post canned Harold Meyerson a month ago, too.