Sanders and Clinton square off in Florida 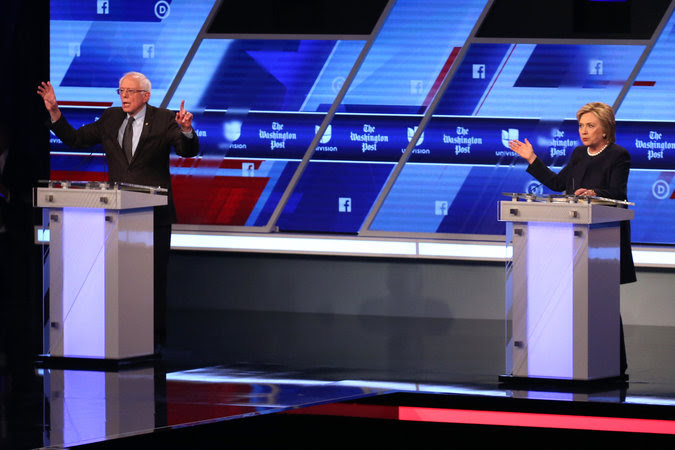 Hillary Clinton and Senator Bernie Sanders clashed vividly over immigration reform, health care and Cuba during a contentious debate Wednesday as the two Democrats appealed to Hispanic voters and tried to outdo each other in assailing Donald J. Trump.

Mrs. Clinton, bruised by her surprise loss in the Michigan primary a day earlier, was on the attack throughout the debate as she sought to undercut Mr. Sanders’s momentum before the next round of primaries.

Aiming her remarks at viewers watching on Univision, a Spanish-language sponsor of the debate, Mrs. Clinton threw his past support for Fidel Castro and President Daniel Ortega of Nicaragua in Mr. Sanders’s face and repeatedly criticized him for opposing a 2007 bill that would have created a path to citizenship for millions of immigrants in the country illegally.

“We had Republican support,” Mrs. Clinton said. “We had a president willing to sign it. I voted for that bill. Senator Sanders voted against it.”

She refused to let up when Mr. Sanders explained that he thought the guest worker provisions in the bill were “akin to slavery.” Mrs. Clinton argued that she, Senator Edward M. Kennedy and Hispanic groups would never have supported such a bill. Her broadsides finally became too much for Mr. Sanders when she accused him of supporting “vigilantes known as Minutemen” on the border.

“No, I do not support vigilantes — that is a horrific statement, an unfair statement to make,” Mr. Sanders said. “Madam Secretary, I will match my record against yours any day of the week.”


This might be the only accusation that catches some traction against Sanders.  Otherwise his performance scored slightly better than Hillary's on the Bloomberg report card.

Initially positioned herself as the chief Democratic leader, focused on the GOP and party differences. Then shifted to dish out cherry-picked criticism of her rival’s congressional votes (sometimes in a misleading fashion) —but often bristled when he swiped back at her. Was given noticeably tougher questions than Sanders, and offered serviceable if pre-packaged answers on topics such as her email server, voters’ distrust of her, and Benghazi. Avoided any glaring oh-my moments that could have supercharged Sanders’ newfound momentum, but didn’t do anything to slow him down.


Almost exactly how I and others saw it, and how it's been unfolding for the past few scrapes.  Clinton's trust and honesty issues are cemented, and they are costing her dearly with the youngest voters.

Small wins aren't what Sanders needs at this point, as everybody who's been following closely knows, so the results next Tuesday in Florida -- and Ohio and Illinois and Missouri and North Carolina -- will tell us whether there was breakthrough in Michigan or not.

Gadfly took issue with Sanders' refusal to hit Clinton over Honduras, and The Onion had far and away the best snark ...

MIAMI—Surreptitiously grabbing the explosive device stashed inside her lectern and pulling its pin as soon as she heard moderator Jorge Ramos mention her support for the Iraq War and the Wall Street bailout, presidential candidate Hillary Clinton reportedly threw a flash grenade onto the stage during Wednesday night’s Democratic debate to divert attention away from a question about her Senate voting record.

“That’s an important question, Jorge, and one I’m happy to answer,” said the former secretary of state just as the military-grade M84 stun grenade exploded, emitting a deafening blast and blinding flash of white light that prevented anything on stage from being seen or heard for the duration of Clinton’s answer.

After cowering with their hands over their ringing ears for approximately 70 seconds, rattled audience members, the debate’s moderators, and fellow candidate Bernie Sanders were said to have regained their vision and hearing just in time to make out the final sentence of Clinton’s response: “And that’s why I’ve always stood on the side of the middle class and working families.”

At press time, a misty white gas was seen pouring from the base of Clinton’s podium toward the moderators’ desk as Ramos cited Clinton’s changing positions on gay marriage, the Keystone XL pipeline, and the Trans-Pacific Partnership.