(God love Charles Kuffner for doing the blogging I cannot bring myself to do: Ken Paxton, Sid Miller, the statewide and Harris County runoffs.  There's just no resolve in me to commiserate about causes lost two years ago, and barely any for the Houston political scene.  Maybe next month I can manage a post or two about our awful state officials and our stultifying local elections.  I'm hoping.  For the moment it's just too dreary.) 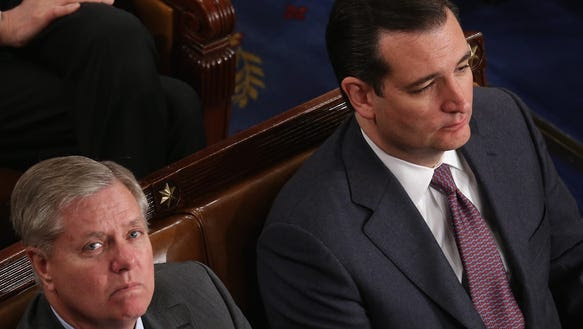 Last week when Miz Lindsey picked poison over a bullet to the temple, I didn't bother with anything but a single Tweet to note the moment.  A blog post?  Why?  I just figured ... well, Lindsey Graham.  Once a dumbass douchebag, always, ya know?

But Jeb!?  That's quite a bit more craven.

We can only hope, Mr. Lowe.

"Ted is a consistent, principled conservative who has demonstrated the ability to appeal to voters and win primary contests," Bush said in a statement provided to CNN.

"Washington is broken, and the only way Republicans can hope to win back the White House and put our nation on a better path is to support a nominee who can articulate how conservative policies will help people rise up and reach their full potential."

But to be certain, this is the ongoing "lesser of two evils" balsamic reduction for the GOP.

Like Graham, Bush seems to have made his decision based on whom he hated least. The former governor had refrained from endorsing Rubio while he was still in the race, a Republican source told Politico, because he believed his fellow Floridian and one-time protégé “was not up to the job of being president.” In endorsing Cruz, a Tea Party-aligned extremist, Bush follows in the footsteps of Chris Christie, who was driven to endorsing Trump by his obvious disdain for Rubio, and Ben Carson, who threw his support behind Trump in part out of animosity toward Cruz, whose dirty tricks in Iowa the retired neurosurgeon never forgave.