The Texas Progressive Alliance is girding its loins for the coming culture wars against some very formidable opponents.  You know, the ones who think God is on their side.  Raise your shield; here comes the roundup of blog posts from last week. 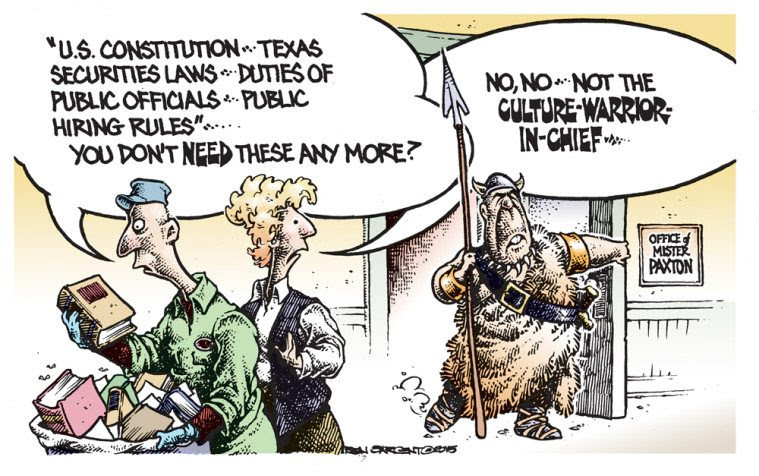 Off the Kuff decries the Supreme Court ruling that will force a vote on whether or not to repeal Houston's Equal Rights Ordinance.

Harold Cook explains why the Republicans won't nominate Donald Trump, but won't be able to escape him, either.

Libby Shaw at Texas Kaos and contributing to Daily Kos never ceases to be amazed by our former governor's serial hypocrisy. Have you no decency, Rick Perry?

CouldBeTrue of South Texas Chisme notes that many people in South Texas do not have clean drinking water. This should be a scandal, but, as Donald Trump has amply explained, Texas Latinos are nothing but piñatas to republicans.

nonsequiteuse issues a call to arms for defenders of Planned Parenthood -- and the surreptitious videos they recorded of executives discussing fetal tissue donation -- to appear in Austin this week at a Senate committee hearing, intended to address the issue with yet more reproductive choice restrictions.

Ben Hall and Steven Hotze, Ben Hall and Dave Wilson... a lot of prayers got answered for the Houston bigots and homophobes when the Texas Supreme Court ordered the City of Houston to either repeal its equal rights ordinance or put it on the November ballot. PDiddie at Brains and Eggs knows that we don't need another HERO referendum, but we're going to get one anyway.  And ...

... Texas Leftist led the reporting when the news broke last Friday about the SCOTX decision on Houston's ERO, and John Coby at Bay Area Houston added up the Heroes and Zeroes.

Bluedaze observes the international movement to establish that hydraulic fracturing needs to be held accountable in a court of law for human rights abuses.

With football season fast approaching in Texas, Neil at All People Have Value posted about the NFL's refusal to allow Junior Seau's family to speak at his Hall of Fame induction as Seau's family sues the NFL over his terrible head injuries. Football is unsafe to play at any level. APHV is part of NeilAquino.com.

The Texas Election Law Blog tries to clear up some confusion about resignations and vacancies.

Carol Morgan notes that this is the summer of (Bernie) Sanders.

Ex-pat Texan Elise Hu-Stiles documents what it's like to live and have children in Seoul, South Korea.

The TSTA Blog wishes our state leadership cared as much about schools as teachers, parents, and charities do.

Scott Vogel, editor of Houstonia, has some choice words for a couple of readers who objected to an ad showing a multi-racial family.

Paradise in Hell knows that Texas is great in spite of Rick Perry, not because of him.

Eric Berger geeks out over the pictures from Pluto.

Grits for Breakfast tries to distill some lessons from the Sandra Bland tragedy.

And Fascist Dyke Motors is having to deal with those "slippery slope" people.
Posted by PDiddie at Monday, July 27, 2015