How many fundraising e-mails did you get?

Did you delete them without reading them?  Did you actually make any contributions? 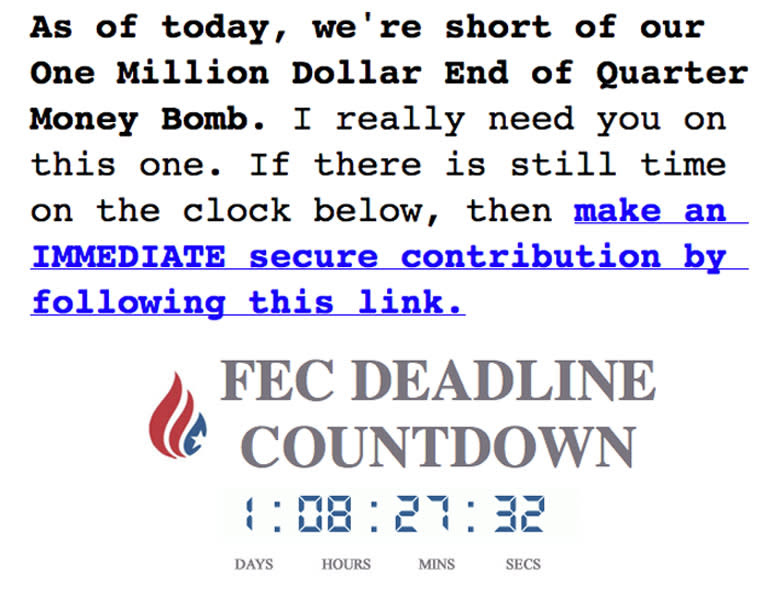 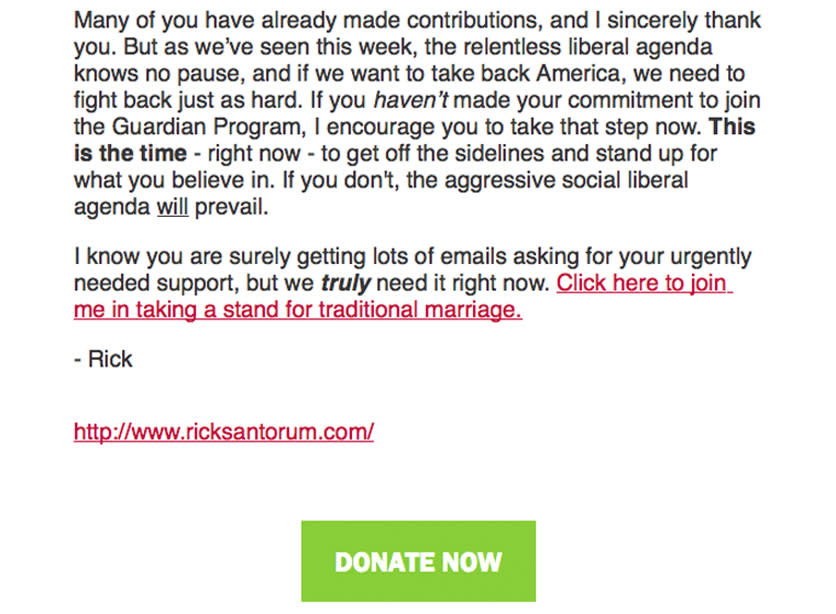 Enter to Win: Who doesn't love a shot at winning something? Ted Cruz invited supporters to "come shooting with me." It was free to enter the contest to win a shooting outing with the Texas senator, but Cruz told supporters: "After you've entered, make a generous Shoot With Ted contribution of $35, $50, $100 or more to my campaign." Jeb Bush threw a $3 contest promising that three winners would get a photo of Bush and his father "battling it out on the tennis court," signed by both the candidate and the former president.

Fake Deadlines: Tuesday's end-of-quarter fundraising deadline is the real deal. The candidates all have to report how much cash they've raised during the quarter and then face judgment on what those numbers say about their viability. But, hey, why wait for a real deadline when you can make up one? Marco Rubio's campaign urged supporters to help raise $44,000 in a day in honor of his 44th birthday. Columba Bush asked people to contribute to her husband in the first 24 hours of his campaign because "everyone is watching to see how much support we have out the gate."

Family Affair: Candidates trot out glowing endorsements from spouses and kids to gin up cash. Rick Perry's wife, Anita, told supporters: "He's the most principled man I've ever known" — and please donate to "have a front row seat to history."

Size Matters: Big contributions are nice, but the little ones add up — and can say something about the depth of support for a candidate. Bernie Sanders made a decidedly lowball pitch as a way of making a statement in his Democratic campaign. "Stand up to the Super PAC attacking us by making a $3 contribution to our campaign today, and send a powerful message that you have had enough of the billionaire class buying elections," he wrote.

Don't Ask: Sometimes, it's nice to check in with supporters without hitting them up for cash. Supporters are more likely to keep opening a candidate's emails if it's not always about the money. There's no purchase necessary to enter Hillary Rodham Clinton's contest to win dinner with the Democratic candidate, for example. And Carly Fiorina's campaign sent out a chatty email from her friend and former business colleague Deb Bowker describing the Republican candidate as "a strong, determined, optimistic woman with a heart filled with a passion for service." There's no "ask" in either email. But recipients will surely be hearing more.


Since we also have a municipal election going on in Houston, some of us also got a daily boxcar load of e-mail solicitations from mayoral hopefuls, council candidates, and even judicials running for office in 2016 (some of them are trying to scare off primary challengers).

Nobody seems the least bit embarrassed by all of this money-grubbing.  A recent NYT poll showed...


So what's it going to take the change it?  I just don't believe that voting for the same old people in the same old two parties over the years has done much to fix it, despite what few mumblings are being uttered.  Do we just keep on bumping down the road with a flat tire and nobody in the car willing to stop and get out and change it?  That's not what we teach our teenagers to do: ignore your problems, hope they'll resolve themselves.

There are other better options on your ballot; we just need more people to come to that realization and stop perpetuating the decay.  Because what we've been doing in the past isn't going to produce a result any different than what we have previously gotten.  Definition of insanity and all that.
Posted by PDiddie at Wednesday, July 01, 2015

1. Totally right on the duopoly not changing this. Now, the feds may not be able to control primaries, but federal funding of Congressional as well as presidential general elections would be a good start.