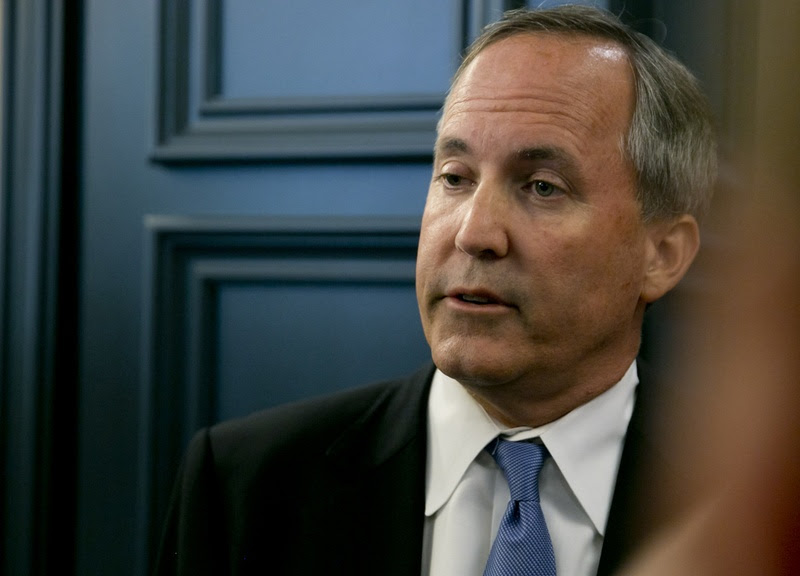 Attorney General Ken Paxton is expected to surrender to authorities Monday following an indictment on multiple felony charges stemming from his involvement with a North Texas technology company accused of defrauding investors, according to multiple sources close to the case.

A Collin County grand jury issued the indictment against the first-term attorney general on Tuesday, two sources who had been briefed on the proceedings told the Chronicle on Saturday.

Original post: So if I were a betting man -- which I am -- I'm gambling there's going to be a document dump and a press conference in Collin County late this (Friday) afternoon.  I can't bet on whether it will contain good news or more bad news for our lazy-eyed attorney general, though.  Via Charles, who put his post up on Wednesday, the TO.

Is this the beginning of the end for Attorney General Ken Paxton? (Tuesday)’s confirmation by Dallas local news station WFAA that a grand jury was meeting at the Collin County Courthouse to hear evidence related to Paxton’s alleged violations of securities law marks a milestone in his legal troubles. The development has been anticipated by Paxton-watchers for nearly a year and a half, ever since Paxton admitted in writing to violating the state securities code by failing to disclose that he was being paid to route his legal clients into the hands of an investment manager with a troubled track record.

It’s unclear whether this was the first day the jury heard the Paxton case, or how long they’ll continue to meet. But the stakes are high for Paxton. Special prosecutors Brian Wice and Kent Schaffer recently won an order expanding their case from already-disclosed improprieties to a first-degree felony case. That means the amount of money involved exceeds $100,000, and it makes the episode that Paxton already disclosed look like peanuts.


You can read more there for the particulars about how the case was enlarged to a first-degree felony, though there aren't many since the prosecutors aren't telling the media, only the GJ for now.

It's been a long and winding road to this point, and that doesn't include last summer's political season, when Paxton's criminal admission was known but impacted his electoral prospects not at all.  He ultimately defeated his Democratic challenger last November, Sam Houston, by twenty percentage points.  For some additional background, Juanita Jean points out that Wice was one of the guys who helped Tom DeLay, back in the day.  So you could be excused for thinking that, like Rick Perry's one remaining indictment, the fix might be in.

That Paxton is in legal trouble can be attributed in part to the efforts of a watchdog group, and the determination of a local lawyer.

The public integrity unit within the Travis County district attorney’s office said it lacked jurisdiction and forwarded information to Dallas and Collin counties for lack of jurisdiction. Dallas County District Attorney Susan Hawk didn’t touch the case either, saying she was not aware of any alleged crimes being committed in the county.

After receiving a complaint from Texans for Public Justice, Willis stepped aside and said that “appropriate investigation agencies, including the Texas Rangers,” should handle the allegations against Paxton.

“As soon as we saw what he signed with the State Securities Board, it was obvious that he was admitting to felony conduct,” said Craig McDonald, executive director for Texans for Public Justice. “If Greg Willis hadn’t stepped aside, this thing would have died.”

Meanwhile, Dallas lawyer and blogger Ty Clevenger took the extraordinary step of sending information about Paxton to members of a Collin County grand jury, including three from the same church. He said he also dropped off information to a grand jury member’s home. He got their names from Collin County officials by asking; in Dallas, Hawk declined to release the grand jury’s names.


Following that, sniping between Paxton's spokesman, Anthony Holm, and special prosecutors Wice and Schaffer.  I'll leave to you to click and read it.

It's been three weeks since nonsequiteuse asked the question.  Let's move on to the follow-up question, for no greater purpose than parlor game speculation.  If Paxton gets indicted, does Greg Abbott finally force him out in order to replace him with a hand-picked stooge?  And if so, who?

I'd like to hear more about this behind-the-scenes jockeying, but so far as I can tell, nothing's being said out loud.  For the record, Paxton crushed Dan Branch in the runoff last spring, and the fellow who came in third, Barry Smitherman, is extremist and dishonest enough himself to be a perfect fit after Paxton.  Smitherman's bloc of votes moved directly over to Paxton after the general election, so if Abbott needs to appease Tea Party animals, there's some red meat he could throw them.  But that's as far as I can go in terms of prognostication.

First we need to see Paxton shown the door, and that will only stand a chance if the Collin County grand jury returns an indictment or two.  And frankly I find that unlikely, despite the desperate screeching of Paxton's mouthpiece/flack, Holm.

Today could be the day we know something, either way.
Posted by PDiddie at Friday, July 31, 2015