El Chapo vs. The Donald 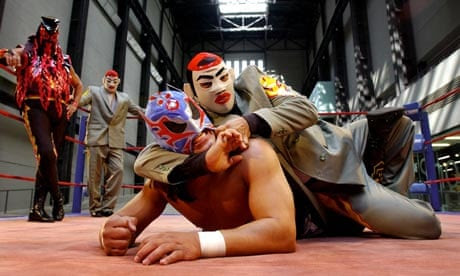 The Mexican drug kingpin Joaquin Guzman -- known as 'El Chapo', and who escaped a second time from a maximum security facility in Mexico over the weekend -- is now tweeting threats at Donald Trump.

"Keep f***ing around and I'm gonna make you swallow your bitch words you f***ing whitey milks***tter (that's a homophobic slur)."


Trump notified the FBI after that.

Even with all the money Trump has (though he's about $50 million poorer of late) and all of the conservative political power he's amassing -- certainly the Operation Jade Helm 15 observers would be willing to divert some of their crack troops to his security detail if Trump requested -- I'm not so sure I would bet against Shorty here.

Since I grew so tired of the Texas DPS officers and their expenses for keeping our former governor of Texas safe -- whatever has happened to his indictments, by the way? -- I doubt whether increased Secret Service platoons for political candidates who shoot their mouths off is something I, as a taxpayer, want to see increased.  We're still a few months away from having to make a decision about who gets protected, by the way.

If it comes down to a choice between Jeb Bush and Trump next March, I might just have to cross party lines and vote in the GOP primary (and not for Pee's dad, either).  There's a small chance my vote might be offset by all of the Republicans voting for Bernie Sanders in the Democratic one, thinking that beating a "soshulist" is going to be easy for any one of their clowns.  I am starting to have some doubts about that as well.
Posted by PDiddie at Tuesday, July 14, 2015