Rick Perry gets halfway to the clear

We just shouldn't be surprised. 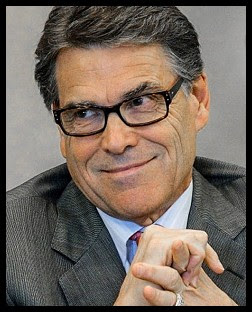 One of two felony indictments against former Texas Gov. Rick Perry was tossed out Friday, giving the Republican presidential candidate a potentially huge legal victory in the face of flagging polling numbers for the 2016 race.


The 3rd Court of Appeals in Austin sided with Perry's pricy legal team, stating in a 96-page ruling that the charge of coercion of a public servant constituted a violation of the former governor's free speech rights.
Perry, who left office in January, was indicted last August on the coercion charge and a separate charge of abuse of official power, which wasn't affected by the ruling.
For now, he'll still have to face the abuse of power charge — which could tie him up in court and eat into valuable on-the-ground campaigning time in the midst of his White House run. But Perry's lead attorney, Tony Buzbee, downplayed the future significance of the case, just as his client has for months, saying it will have "no impact whatsoever" on the campaign.
"One down, one to go," Buzbee said at a Houston news conference. "The court today threw out what we believe to be the greater of the two charges." He added that the abuse of power charge is "hanging by a thread."

Thanks goes to Justice Bob Pemberton, who declined to recuse himself from the case despite the glaring conflicts of interest.  I also had a conversation in a podcast with Brad Friedman of Bradblog about the indictments and their chances back in May.

Michael McCrum, the San Antonio-based special prosecutor leading the case, has long maintained it deserves to go to trial. He said he wasn't certain whether he'd appeal Friday's ruling since it affects an underlying statue that will impact many cases, not just Perry's.
"Obviously we're ready to proceed to trial on the other count," McCrum said, though he noted he doesn't yet know when such a trial would begin because Perry can appeal the abuse of power charge to the Court of Criminal Appeals, Texas' highest criminal court. With that court on summer recess, doing so is "going to cause an extended delay," he said.

Buzbee said he considers the remaining charge nothing more than a misdemeanor and said the Court of Criminal Appeals "will throw it out on its face." The abuse of official capacity nonetheless has a maximum sentence of 99 years in prison, while the voided coercion charge carried a 10-year maximum sentence.

I don't see a conviction sticking, I really don't even see a trial even happening anytime soon because of the possible appeal to the CCA, as McCrum mentions.  There are simply too many Republicans who have Rick Perry's back.

See DFW CBS and the Christian Science Monitor for additional insight, including the ramifications on his presidential bid.  And again Charles with more and many links to others.
Posted by PDiddie at Saturday, July 25, 2015

Totally agreed with you.

First, I do NOT "get" the great number of liberal news aggregation websites claiming Perry "lost." No, he got a fair-sized win that could set him up for a bigger one.

And, of course, the potency of the one remaining charge kind of hung on the first one.

To riff on Kuff, he didn't even "win one and lose one." He won one, and just has to argue the issues on the other one at actual trial.