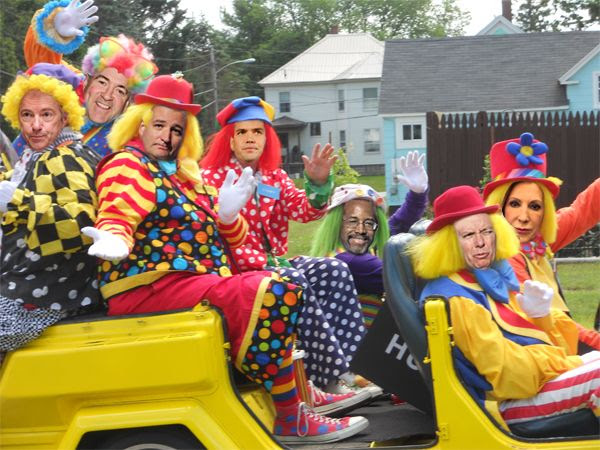 Just two weeks before the first Republican presidential candidate debate and the latest from Pew Public Policy Polling shows the top ten -- the only ones who get in -- as these:

That's eleven, with Rick Perry, Bobby Jindal, and Rick Santorum at 2%, outside looking in.  Jim Gilmore (who?), Lindsey Graham, and George Pataki all have 1%.

This ABC/WaPo from Monday only ranks nine, in this order: Trump, Walker, Bush, Huckabee, Rubio, Paul, Carson, Cruz, and Perry.

Establishment Republicans are already cringing in agony at the thought of a debate where Trump's mouth turns into a flamethrower directed at everybody else on stage with him.  Thus, I'm pulling for former governor Goodhair and Glasses to make the cut, because he's been the only Rethug willing to rumble with The Donald over Ill Eagles.  Speaking of trolls, the leader is in Laredo today -- completely surrounded by gobs of various law enforcement officers -- to tour the border.

"I've been invited by the border patrols, and they want to honor me actually, and thousands and thousands of them, because I'm speaking up," Trump said Wednesday on Fox News. "I may never see you again, but we're going to do it."

“I hope he can find the border because I’m not sure he’s ever been there before," Perry said.


No mention of Greg Abbott joining him, as he did with Walker four months ago.

The dynamic with Ted Cruz forswearing 'Republican-on-Republican violence' in refusing to criticize Trump is your basic Cruz-styled political calculation: he plans to sweep up the Bigot Caucus when Trump eventually quits the race (and hopefully runs as a third-party protest).

Donald Trump says the chances that he will launch a third-party White House run will “absolutely” increase if the Republican National Committee is unfair to him during the 2016 primary season.

“The RNC has not been supportive. They were always supportive when I was a contributor. I was their fair-haired boy,” the business mogul told The Hill in a 40-minute interview from his Manhattan office at Trump Tower on Wednesday. “The RNC has been, I think, very foolish.”

Pressed on whether he would run as a third-party candidate if he fails to clinch the GOP nomination, Trump said that “so many people want me to, if I don’t win.”

“I’ll have to see how I’m being treated by the Republicans,” Trump said. “Absolutely, if they’re not fair, that would be a factor.”

Besides the rumble you mentioned, the two Cubans possibly rumbling against each other and Cruz vs. Paul if there's only room for one pale libertarian, I also want to see.