The hearse is waiting outside

There's room for another casket.  The one already in the back is ... little.

Clinton’s victories in Ohio, Florida, Illinois and North Carolina put her firmly on course to defeat her primary rival, Sen. Bernie Sanders of Vermont. As the results were announced on Tuesday evening, she took the stage before a boisterous crowd of supporters here and seemed to pivot towards the Republican frontrunner, Donald Trump, who also won in Florida.

“We are moving closer to securing the Democratic Party nomination and winning this election in November!” Clinton declared.


No polling versus reality shockers to be had on this night.

It looked as if Sanders might prove the Clinton campaign’s bullish prediction wrong after he won a stunning upset in Michigan on March 8, but Clinton’s victories on Tuesday helped her stop Sanders’ momentum and establish a seemingly unbeatable lead.

Though Clinton was expected to win the primaries in North Carolina and Florida on Tuesday, polls showed her potentially losing in Ohio, Arizona, Missouri and Illinois. Even if Sanders had won all of the states that were in play on Tuesday, he would still have faced an uphill battle. However, by taking Ohio and Illinois, Clinton definitively pulled ahead.


Elsewhere, the mood was more that of a wake.

Sanders took the stage shortly after Clinton’s appearance in Florida and addressed more than 7,000 of his cheering supporters in a convention center in Phoenix with his usual stump speech. The 74-year-old senator mentioned raising the minimum wage, getting money out of politics, fixing free trade deals and reforming the criminal justice system, among other typical stump-speech issues.

What Sanders didn’t mention were the five states that voted in the Democratic primaries Tuesday night, and what the results meant for his viability as a candidate. This was in contrast to Sanders’ election night appearance on Super Tuesday, when he explicitly downplayed his mixed showing and reassured his supporters he would take the fight to “every” state. In contrast with most election night gatherings, there were no TVs showing primary results in Phoenix, so Sanders’ supporters were not shown Clinton’s wins racking up in the background as the evening progressed. Arizona’s Democrats vote next Tuesday, and Sanders is expected to do well in the state.


So we wait a bit longer for Team Sanders to wake up and smell the coffee, bust a move, and instruct his support network which way to go.  If you know any Sanders people, you already know that they're considering all options.  Since so many of them aren't Democrats -- like Sanders himself, allegedly -- we should expect to see wholesale defections among the blue ranks as Clinton turns her battleship to the right and steams ahead for the fall.  And there ought to be plenty of Republicans for them to recruit. 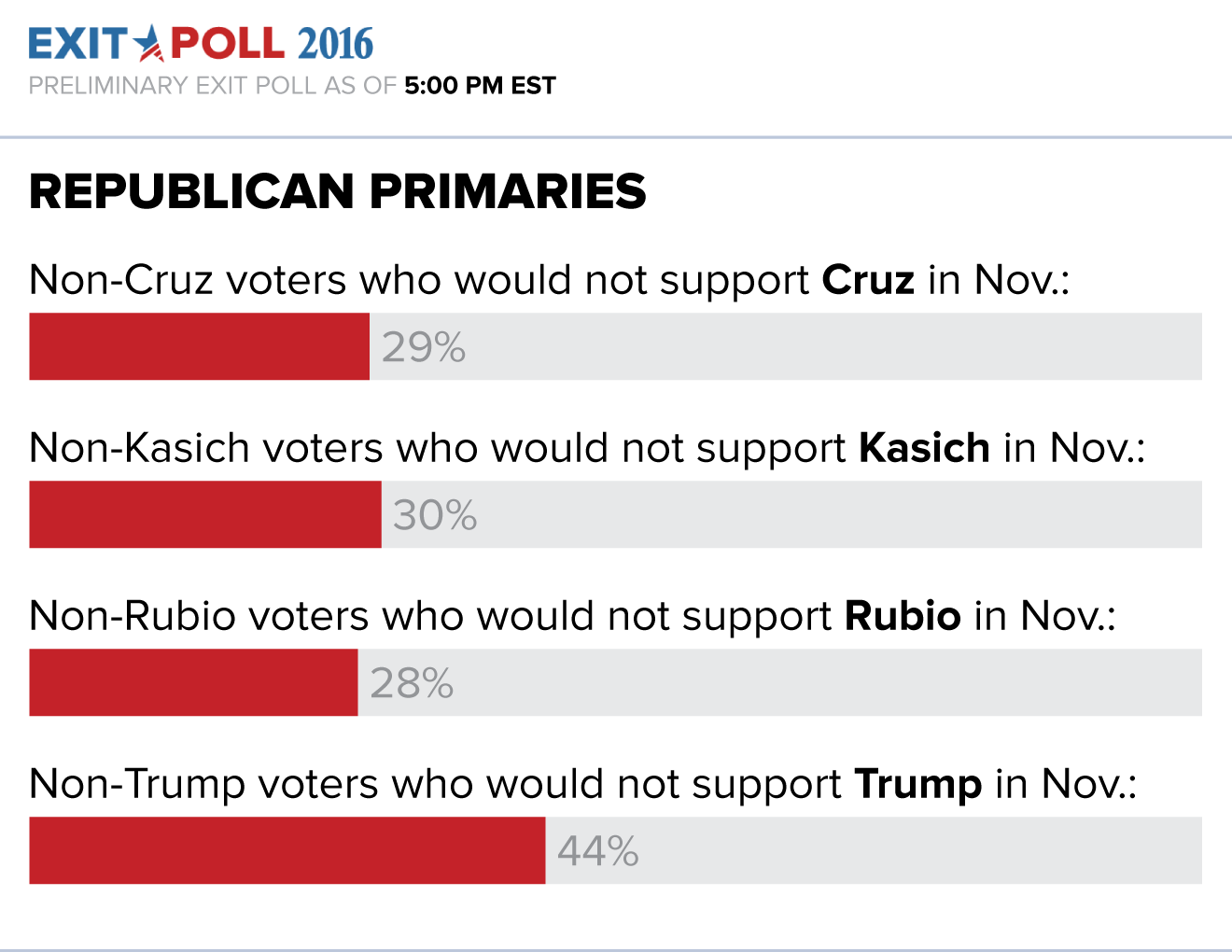 That's the only interesting storyline left to unfold (as far as I'm concerned): post-Sanders, how do the Democrats plan, go, and do in the general.  They may have been gifted with another Goldwater ... or perhaps will deliver us the nation's worst nightmare.  There's a bitter pill the #NeverTrumps have to swallow.  Will they?

Some Democrats say it's just like 2008 and  Hillary's PUMAs: everybody will get over their upset and fall in line, get onboard.  Eventually.  By November.

I'll just be glad to get to blogging about some things beside the presidentials every day after the past two months.
Posted by PDiddie at Wednesday, March 16, 2016

Unfortunately the Republican party nomination will be such a shitshow you're going to have to continue daily coverage of the presidential race right up to November.

The Republican convention might end up a turning point in American politics if the Republicans cannot coalesce around their candidate. If Berners start looking like dead-enders Hillary may decide to sweep far right to pick up moderate Republicans. She is so eager to be president I wouldn't put it beyond her to fracture the Democratic party in her chase for the perfect poll numbers. And it would make a certain sense that the first female, American president would have to come from the right.

I can certainly see a future where President Hillary splits the American electorate between three political parties. One giant corporatist center-right party and two ineffectual lesser parties. One a party of far-right wing evangelicals and racists and the other a fractious coalition of progressives and social justice warriors tiptoeing around PC landmines. No doubt the Corporatist party would win elections consistently year after year.

Of course I must apologize. It most definitely won't end up that way. Staring into the creeping horror of a successful Trump candidacy must have made me prone to flights of fantasy.

Bernie is not a Democrat, he is running with them, and he does vote with them, but he is according to himself not a Democrat. http://www.politico.com/magazine/story/2015/08/bernie-sanders-2016-democrats-121181

Quick change comes with revolution usually with the violent over throw of a government/political party. Is that what people in the left are looking for?