Some members of the Texas Progressive Alliance switched from Mueller High Life to Stolichnaya (in order to more quickly drown their sorrows) at the 5 p.m. unhappy hour yesterday.  The gloating also lurched to the right, but is still happening much too early.  When you play two-party politics like it was a football game, that's what it feels like to those of us who aren't fans of either team.

After reading Socratic Gadfly's wrap-up and round-up on the Mueller report and reactions, you're ready to move on to the non-collusion/obstruction-related blog posts and news from across Texas from last week!

The biggest statewide news was the explosion and fire at the ITC storage facility along the Houston Ship Channel, which resulted in a environmental catastrophe that is still ongoing today.  It began burning on Sunday afternoon March 17 ...


By Monday morning, March 18, a shelter-in-place for the nearby city of Deer Park had been issued as the fire burned throughout the night.

Air quality has degraded slightly in the last few hours over east and central Harris County. This is likely a combination of the evening commute, decreasing winds, and the ongoing #deerparkfire #houwx #txwx pic.twitter.com/QPD6Ygtorj
— Jeff Lindner (@JeffLindner1) March 19, 2019


And all day Tuesday.


Taking my children to school this morning.


The first air toxicants were reported.


Just in case you think this isn't a fight for our lives, keep this in mind:

Naphtha can irritate the nose and throat when breathed, and poisonous gases are produced when naphtha is exposed to fire, according to earlier reports in the Houston Chronicle.https://t.co/QaJtcsyi65
— Sema 🌹 (@_SemaHernandez_) March 19, 2019

Any kind of exposure related to the Petrochemical Industry will have long lasting health & environmental implications.

There are reports of ash from the plume.

"These black particulates will disperse at high altitudes and then settle across areas west of Houston in tiny quantities" @cltomlinson. Is this the essence of our social contract with the oi and gas industry? Is it time for a new, green social contract? 🙋‍♀️🙋🏽‍♂️🙋🏾‍♀️#deerparkfire pic.twitter.com/EdUZsG9Y3t
— Diana Walton (@DianaWaltonprop) March 20, 2019


Instead of insinuating and attacking residents sharing how we've been impacted, journalists have a responsibility to hold regulating agencies and the petrochemical industry accountable and responsible for causing this catastrophic situation.
— Sema 🌹 (@_SemaHernandez_) March 20, 2019


The first time benzene levels in the air around the facility were reported.


And spill runoffs into the Ship Channel were first noted.


The entire Gulf Coast of the United States is affected by #ITCFire.

Who ever said this needs a reality check: "The smoke plume is gone and offials say there is no impact on the Deer Park community."

"This is not going to get any better anytime soon" — @_SemaHernandez_https://t.co/MW5vdqLuXJ
— Common Dreams (@commondreams) March 21, 2019


And as we know since last Thursday, it really hasn't.


I'm in the ER patiently waiting to be called.

There are a lot of people here waiting.

After three days, the #DeerPark fire's out.

The company who owns the Houston-area facility had a long history of environmental violations before the fire started on Sunday. https://t.co/MQnWhq21Y3
— Texas Tribune (@TexasTribune) March 21, 2019

The catastrophic petrochemical fire is going from bad to worse. Ecological devastation is unfolding and will have long lasting impact on our health, environment, and economy. #WorldWaterDay #DeerParkFire #SacrificeZones https://t.co/J0yEYSjUKb
— Sema 🌹 (@_SemaHernandez_) March 22, 2019


Beyond Bones tells you some things you should know about the Deer Park fire and public safety.

Under the pink dome in Austin, Stephen Young of the Dallas Observer broke down the fight between Texas Senate Republicans and Facebook over abortion.  Earlier today, Progrexas reports that a Texas House committee failed to advance an anti-choice bill because the Democrats denied a quorum call.

Former Harris Commissioner El Franco Lee, who passed away in January 2016, still has more than $3.6M in his campaign account, reported the Houston Chronicle’s Zach Despart. His widow, Ethel Kaye Lee, is its treasurer and has sole discretion on how the funds may be spent. Under state law, the account’s funds must be dispersed by 2022.

They may be contributed to the Democratic Party, one or more candidates and committees, the state, a charitable organization or a university. Individual donations may also be returned. Among Democrats, Lee’s war chest is the third largest, trailing only Sen. John Whitmire (D-Houston), who had nearly $8M on hand as of December 31, and U.S. Rep. Lloyd Doggett (D-Austin), who reported having $4.3M on hand.

The account could become a significant source of campaign contributions for Democrats in the 2020 cycle. 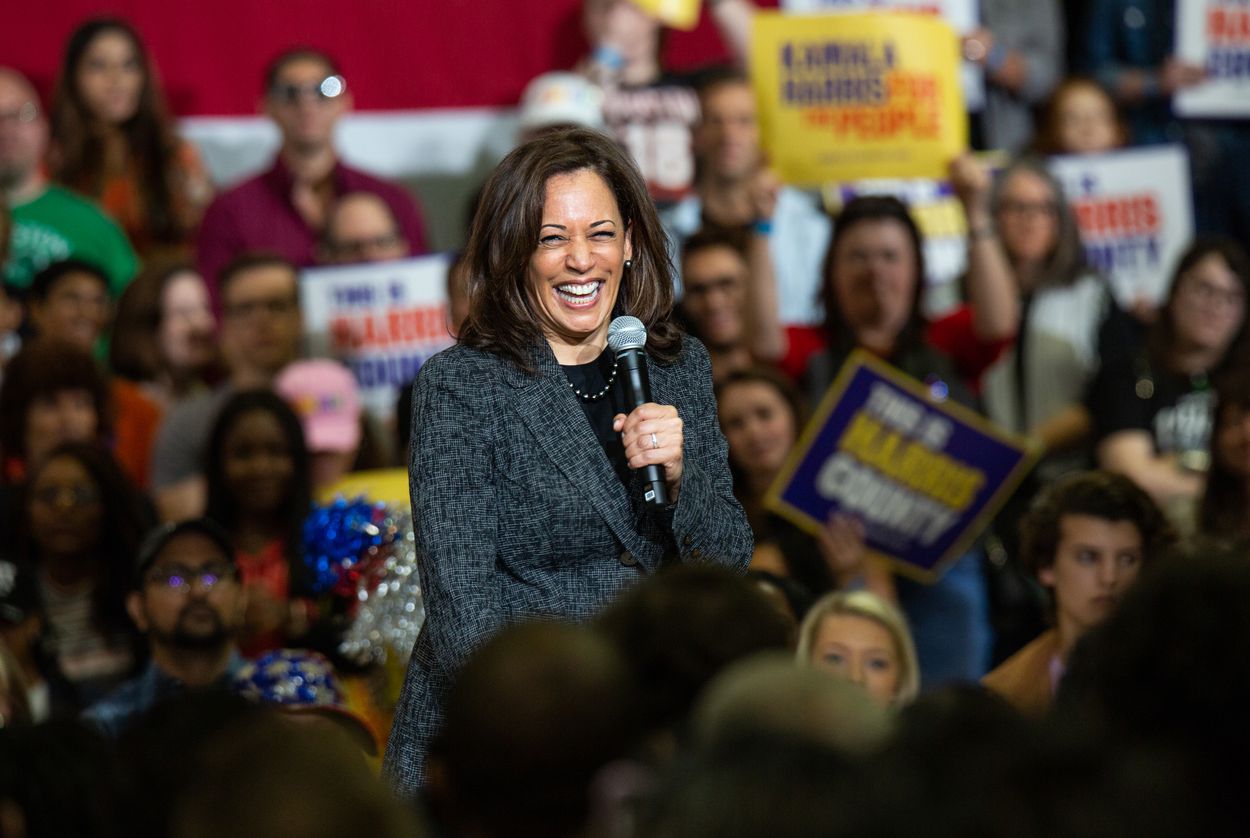 “This is Harris County!” declared a bevy of colorful signs in the hands of supporters in a crowded auditorium at Texas Southern University. And when Harris began to speak during the biggest event of her first major swing through Texas, the native Californian was implicitly communicating much the same message: There may be two Texas Democrats vying for support in this state nearly a year ahead of Super Tuesday, but she isn’t ceding any ground to the state’s native sons.

“I love being in Harris County!” she declared by way of greeting, enjoying raucous applause and, apparently, the alignment between her surname and the name of Texas’ largest county and one of its most diverse. In unveiling a major pitch for raising teachers’ salaries -- a proposal her campaign has described as “the largest federal investment in teacher pay in history” -- Harris made sure to nod to the last Texas Democrat to occupy the office she seeks.

“[Lyndon B. Johnson] was the last president that made a meaningful investment in public education.” One of his reasons, she said, was “to bridge the gap between helplessness and hope.”

Saturday was Harris’ second public campaign event in Texas after a visit Friday night to the Tarrant County Democrats.

In Houston, on the campus of one of the nation’s largest historically black colleges, she attracted a crowd of some 2,400, including influential area Democrats like U.S. Reps. Sheila Jackson Lee and Sylvia Garcia, as well as state Sen. Carol Alvarado and state Rep. Ron Reynolds.

Rodney Ellis, a Harris County commissioner and major crusader for criminal justice reform, praised Harris as a “career prosecutor, but… a thoughtful prosecutor,” defending Harris against criticisms of her record. When he introduced her, he declared, “I’m endorsing her right now!”


In immigration developments, Robert Moore at Texas Monthly reports that inland checkpoints have been closed so that Border Patrol agents can process an influx of families seeking asylum.  NPR also has news that USBP is releasing recently-apprehended migrants without detaining them because, officials say, facilities are filled to capacity.

LareDOS has an account from longtime Zapata County residents who say that the border wall's eminent domain prospects reminds them of the 1950s-era Falcon Dam/Reservoir project.

Sophie Novack at the Texas Observer writes about the diabetes crisis in the Rio Grande Valley spawning an amputation crisis.

In Port Aransas, plans for a major oil export terminal proposed by the Port of Corpus Christi are colliding with locals who want to preserve the community's small-town tourism draws of fishing, birding, and downscale beach experience.  The Rivard Report has the story.

Grits for Breakfast explains why police should be required to get a warrant to use cell site simulators, also known as "stingrays".

Joel Mathis at The Week blogged about how socialism won at SXSW.

And The Bloggess would like to tell you a ghost story.
Posted by PDiddie at Monday, March 25, 2019