The Texas Progressive Alliance couldn't decide between barbecue from RodeoHouston or mudbugs for Mardi Gras this past weekend, so we had both. 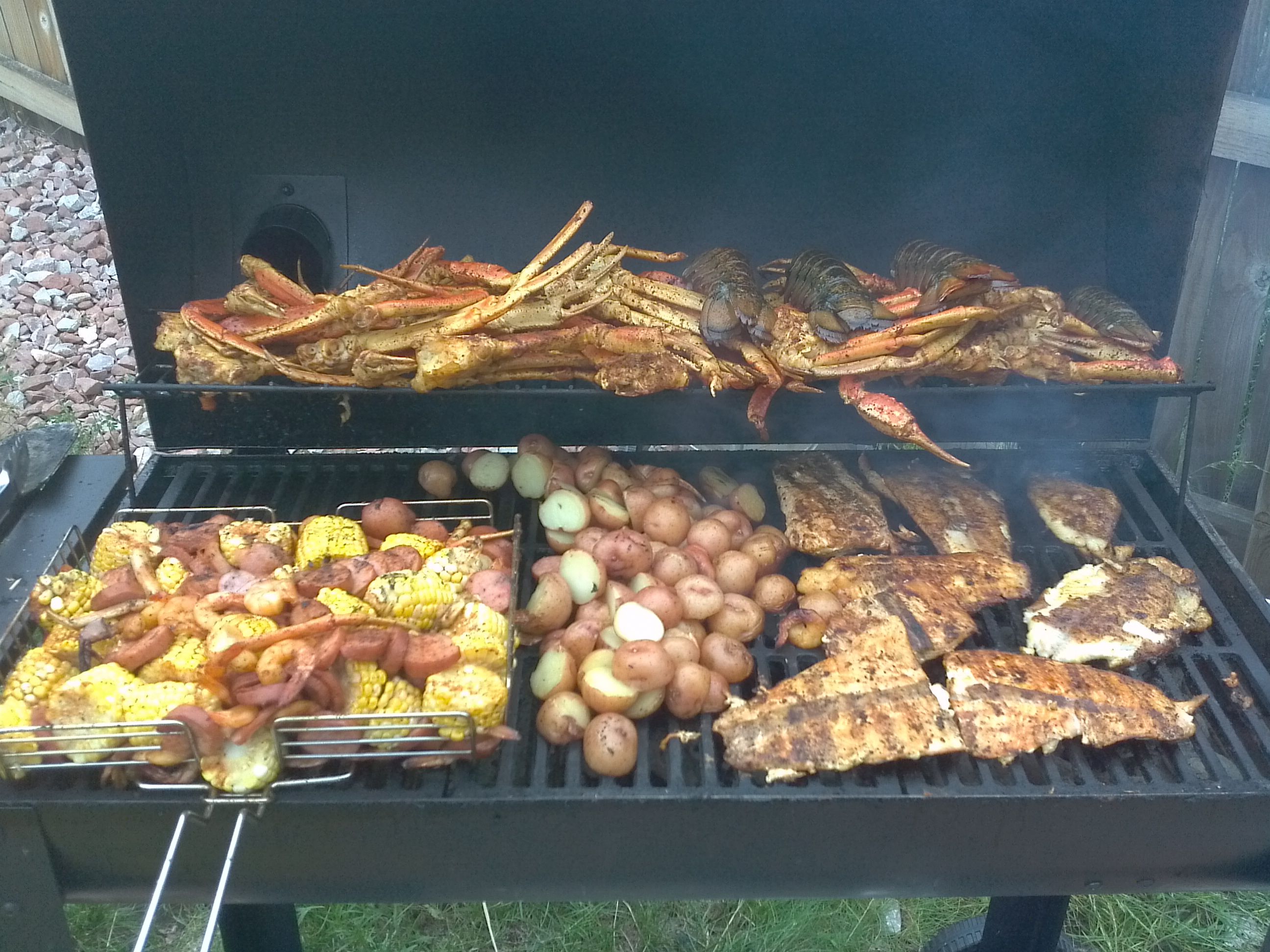 Here's the weekly round-up of the best blog posts and news from around the Lone Star State.

Polling by Quinnipiac for the 2020 presidential election in Texas revealed a dead heat between Trump and three Democratic contenders: Joe Biden, Bernie Sanders, and Beto'Rourke.  Other potential challengers trailed the president in the much-too-soon survey.

The latest UT/TexTrib sampling of Texans on the issues that might drive the 2020 elections at the federal level -- climate change, healthcare, and raising income taxes on top earners -- revealed the stark partisan divides.

Socratic Gadfly looked at bright line-drawing in the sand by backers of one presidential candidate, and reminded us of the historic value of third parties.

Off the Kuff considered a possible Joaquin Castro candidacy for Senate (joining the corporate media in blindness to the only declared challenger to John Cornyn to this point, Sema Hernandez).

Early voting begins today in one Texas House special election, and Election Day is tomorrow for another.  TXElects:

HD145 special: Early voting has concluded for the special runoff election. [...] We will have live results and analysis beginning at 7 p.m. CST on Tuesday at txelects.com/live.


Texans for Public Justice linked to the AP account of Greg Abbott's fundraising prowess.  The numbers nearly defy common adjectives, to say nothing of common sense.

As governor of Texas, Republican Greg Abbott doesn’t flash the White House ambitions of his predecessors or their big personalities. But in just five years he has quietly built his own distinction: Taking in more cash from donors than any governor in U.S. history.

Few others even come close. Since first running in 2013, Abbott has accepted more than $120 million in political contributions, an Associated Press review of campaign filings shows. He has been showered with big-donor money on a scale that is prohibited in most states and far beyond limits for members of Congress — more than 200 times receiving contributions of $100,000 or more.

“The sizes of the checks he asks for, his relentlessness — he never stops fundraising,” said George Seay, who was the Texas finance chair for former Texas Gov. Rick Perry’s first presidential run in 2012. “It’s a machine probably not duplicated, if at all, around the rest of the country.”

Critics have suggested that money is just Abbott’s way of quantifying power, and that he collects it from those who want appointments or influence over policy.

“Abbott stockpiling that money is just a reflection of a one-party state that seems to protect the donor class in Texas,” said Craig McDonald, executive director of the watchdog group Texans for Public Justice. “It says more about how the system works and is bigger than Greg Abbott himself.”

Most remarkable, though, is how Abbott has become almost a party unto himself. Fortified by his donors, he was able to spend more than $2 million last year targeting a few GOP lawmakers who crossed him and to help ideological allies threatened by a minor Democratic resurgence in Texas. He could spare it: that was more money alone than what Abbott’s Democratic opponent, Lupe Valdez, raised in her own feeble campaign.

During the 2018 midterm election, party leaders say Republican Sen. Ted Cruz had a field staff of 18 for the political fight of his life against Democrat Beto O’Rourke. By comparison, Abbott financed a machine of about 200 for his own lopsided campaign and other races he wanted to influence.

“There’s no sense in being governor unless you have a legislature supportive of your ideas,” said Dave Carney, Abbott’s longtime political adviser.


Ross Ramsey at the Texas Tribune continued publishing the state's best political analysis with this piece on the resorting of Congressional targets by the GOP and the Democrats, and with this reminder that O'Rourke and Julian Castro can run for both president and US Senate next year because of the LBJ law.

In a flurry of posts from the Lege, Equality Texas warned of bad 'religious exemption' bills moving in the state Senate, and Better Texas Blog called one of those bills, SB 15, a "step backwards" for hard-working Texans.  Juan Juarez at the Rivard Report argued that Texas needs nondiscrimination laws for LGBT teachers, while the TSTA Blog pointed out that there are powerful interests that don't want to see teachers get a pay raise.  This despite the fact that while the Permanent Education Fund's coffers are overflowing, Texas Standard spoke to the Houston Chronicle's Susan Oliver, who wrote that public schools are getting less money from it than ever.

Texas Vox threw its support behind a bill that would establish an identification system for those in need during a declared state of disaster.  And Scott Henson at Grits for Breakfast aggregates criminal justice legislation, leading off with the marijuana reform debate in the Texas House and a porch piracy-as-state jail felony bill filed by Rep. Gene Wu that Henson considers a bad idea.

HPM reports that while a federal judge has blocked the purge of voters as Texas -- led by SOS David Whitley and AG Ken Paxton -- questioned their citizenship status, a state Senate committee advanced Whitley's nomination on a party-line vote to the full body for confirmation.  All Democrats in the chamber oppose him, enough to reject his appointment and force him from office, but LG Dan Patrick is likely to call that vote when some Senate Democrats are not available.

Somervell County Salon reposted the news and the ruling about the Texas Court of Criminal Appeals striking down the punishment provision of the state's Open Meetings Act on grounds of constitutionality.  From the HouChron:

The Texas Court of Criminal Appeals on Wednesday struck down a key provision of the state’s Open Meetings Act, finding the section that makes it a crime for government officials to meet secretly to discuss the public’s business is “unconstitutionally vague.”

The ruling makes such violations no longer punishable as crimes in Texas, so long as the meetings do not involve a majority of a governing board such as a school district, city council or county commission.

“The court stuck a knife into the heart of the Open Meetings Act,” said Joe Larsen, a board member of the Freedom of Information Foundation of Texas who has worked on the case. “It’s the real world where the consequences are going to be backroom deals hidden from the public.”


The city of Dallas' climate plan -- advertised as public and participatory -- is neither, writes Downwinders at Risk.  And Arlington's changes to its gas drilling ordinance come up short, say activists quoted by GreenSource DFW.

The Tyer Morning Telegraph spoke with Venezuelans living in East Texas about the issues currently facing their homeland.

Christopher Collins at the Texas Observer covered Amarillo's plan to stop fighting with its homeless encampment and instead help them find housing.

To mark Texas Independence Day, BeyondBones has the story of why we were never supposed to be a Republic.

When Sam Houston sent delegates to Washington D.C. in 1836 to propose annexation, they were shut down. The U.S. had been interested in annexing Texas since the Louisiana Purchase in 1803 and had attempted multiple times to purchase Texas from Mexico during the 1820’s. But by 1836 Texas had become a political hot potato. First off, annexing Texas would provoke war with Mexico; second, it would add another slave state to the union, upsetting the balance between slave and free states first established by the Missouri Compromise in 1820 and carefully maintained ever since.

So Texas was left to fend for itself. Houston withdrew the offer of annexation in 1838. Predictably, the next place Texas went to for support was Great Britain. Who could blame them? Access to British foreign markets would drastically boost trade and help Texas pay off its crippling debts. At first the Brits were not very interested in Texas, partly because the young nation had slavery, an institution which Britain had made it its mission to eradicate, and partly because they were already intimately involved with Mexico and didn’t want to sour trade relations with that country. However, as Mexico proved unable to settle its own foreign debts due to political upheaval, Parliament began to take more interest in the Lone Star Nation. Supporting Texas would have been beneficial to them in a few ways. For one, since Texas was a small, newly established nation they would be able to make profitable trade agreements much like they had with many developing Latin American countries. Texas was a big producer of cotton, which the British textile industry needed. Also, Texas could serve as a buffer between Mexico and the U.S., discouraging further American westward expansion, which might affect British commerce. With these benefits in mind, Great Britain was increasingly tempted to extend a helping hand to the fledgling nation during the early 1840’s.

It’s the British interest in Texas (as a country) that finally encouraged the U.S. to seriously consider annexing Texas. Once Britain had made inroads into the nation, it would be very difficult to wrest it from their grip. In 1845 President John Tyler requested Congress to pass a joint resolution to annex Texas.

Two pieces of music news wrap up this week's Wrangle; the San Antonio Current's review of the Trampled by Turtles concert at Gruene Hall was entertaining, and Cardi B broke Garth Brooks' RodeoHouston attendance record (by three fans), last Friday night, and posted her love for the crowd and her inspiration for the performance (Selena).


Im OD honored for all the love Houston gave me! I remember the first time I came to Houston I came out here to strip and people showed me maaaaaa love and Houston was the first place me and set when on a date 😂😂😂The love have really grown . pic.twitter.com/K2lK6rrNmR
— iamcardib (@iamcardib) March 2, 2019