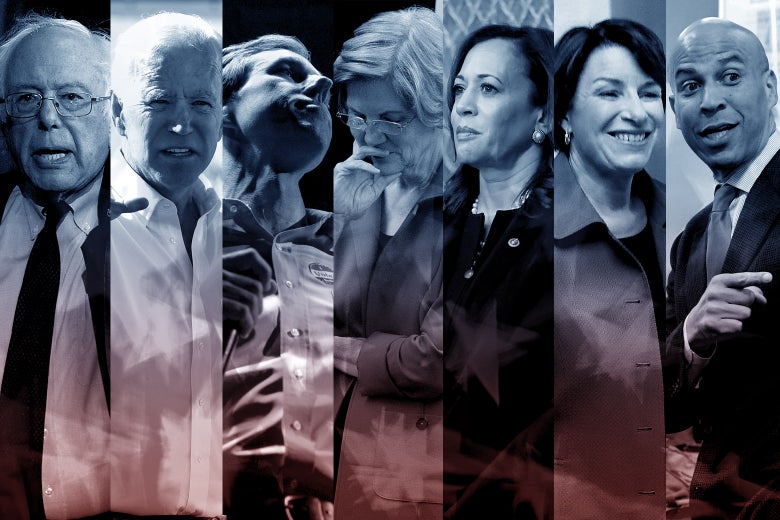 Hellza been poppin' the past week.  Been hard for me just to keep up on Twitter.

Should I post anything serious about Bob, or just the snark?

I made a video of Beto O'Rourke giving advice for storing cookies because why not pic.twitter.com/fl4spyG2e7
— Fishbones (@Fishbones2017) March 14, 2019

The Berners blew up the latest Kos poll.  (They destroyed Markos' official one, you know, so he put it out of its misery).  There goes last cycle's establishment narrative for those.  Maybe someone on teevee will point that out, but you won't ever read about it on DK.

Having used the FiveThirtyEight perspective for a few weeks now -- we'll come back to it shortly -- let's check in on some GOP takes about the field.  National Review's Dan McLaughlin, "Five Lanes..."  (Go ahead and click over.  It's not too bad.)

With Beto O’Rourke’s announcement [yesterday] morning, Joe Biden is the last major contender on the fence. Eric Swalwell, Steve Bullock, and Michael Bennet have all been scouting out Iowa (Swalwell’s home state) or New Hampshire (Bennet has been running digital ads in early states). Bennet seems the least likely of these to run, given John Hickenlooper’s entry in the race (Bennet was running the Denver schools back when Hickenlooper was mayor of Denver, so their fundraising bases overlap closely). Given the palpable desire to finally put the Clinton era in the rearview mirror, it is hard to see the rationale for a Terry McAuliffe campaign. Stacey Abrams, who lost the Georgia governor’s race in 2018, has lately begun musing about a run and reversed herself Monday after appearing to shut the door. With a late start organizing and never having won election above the state-house level, Abrams seems much likelier to stick to a 2020 Senate run or plan for a rematch for governor.

I can buy all of that, and include Andrew Gillum as the third southern Democratic 2018 Senate loser who may -- or may not -- join the fray with actual intentions of simply raising their national profile high enough to land on the ticket as VP.

... [T]he 2016 Democratic electorate regularly featured more black voters and fewer white voters than 2008. In South Carolina, for example, the Democratic-primary electorate was 43 percent white and 55 percent black in 2008, 35 percent white and 61 percent black in 2016. By 2016, black women alone (37 percent of the primary voters) outnumbered all white voters in the South Carolina primary. In Texas, white voters declined from 49 percent to 43 percent. That reflects overall trends within the party, especially in the South and Midwest: Older, white ancestral Democrats died off or left the party in the Obama years, while younger generations of Democrats included more nonwhite voters. Obama’s general-election campaigns also increased the registration and participation rates among African-American voters in particular. African-American women remain the most reliably Democratic of all voter demographics, and turnout among black women is now at least competitive with that of any other voter group, quite unlike pre-Obama turnout patterns. That has major implications for Democratic primaries.

McLaughlin ranks the contenders today with Kamala Harris in first, followed by Beto, Biden, Amy Klobuchar, Cory Booker, and in sixth ... Bernie Sanders.  I can buy some of that.

... [T]he prospect of a contested convention gets all the more real.

That’s because the Democratic Party changed its nominating rules over the controversial role superdelegates played in Hillary Clinton’s nomination in 2016. Now, only pledged delegates will vote on the first ballot at the national convention in Milwaukee next July -- not superdelegates. The Democratic National Committee’s rule change was meant to prevent superdelegates from casting the deciding vote in the first round of voting, but with so many candidates in the race, superdelegates could still play an outsized role. If the results of the primaries and caucuses spread pledged delegates too thin and no one candidate has a majority, it means superdelegates could still swing the nomination when they cast their preference in a second ballot vote. So in this case, O’Rourke’s relatively late entry into the field, and perhaps that of former Vice President Joe Biden soon, may not be good for the party unless some Democratic challengers drop out or a clear front-runner emerges long before next July.

-- Go on and read about your preferred candidates there.  I'm posting just this one.

Yang announced this week that he’s surpassed the 65,000 donor threshold necessary to earn a spot in the first Democratic primary debate. Provided the number of candidates who reach the threshold does not surpass 20 -- at which point candidates would then be winnowed by poll performance --  Yang will become the first Democratic non-politician to earn a spot in a presidential primary debate since Al Sharpton in 2004.