The first Democratic debate of the 2020 presidential primary will be held on June 26 and 27 in Miami, NBC News, the host of the debate, announced on Thursday. To qualify, a candidate will need to either have at least 1 percent support in three qualifying polls, or provide evidence of at least 65,000 unique donors, with a minimum of 200 different donors in at least 20 states.

If more than 20 candidates reach one of those two qualifications, the top 20 will be selected by using a separate method that rewards contenders for meeting both thresholds, followed by highest polling averages, and then the most unique donors.

There will be 12 debates in total over the 2020 Democratic primary season -- the June debate is the first of six scheduled this year, with six more scheduled for 2020. CNN will host the second debate in July.


Various campaigns are making appeals for small-dollar donations -- in some cases, one dollar -- in order for their candidates to hit the 65K contributor threshold.  Not qualifying for the debates may weed the field to some degree.

This story from Insider lists the thirteen who have already made the debate stage.

Miramar, Florida Mayor Wayne Messam entered the race this week, inching the primary field count closer to 20 candidates. And with former Vice President Joe Biden, Sen. Michael Bennet, and Rep. Tim Ryan (among others) discussing possible runs, it may not be long before the group tops 20. If that happens, that could pose serious problems for the DNC and the thresholds it set for its initial primary debates.

Messam, a former wide receiver for Florida State University where he was a member of the 1993 national championship team under legendary coach Bobby Bowden, went on to build one of the fastest-growing minority-owned construction businesses in the country.


As Miramar's mayor, Messam advocated a gun-free zone in the city's new amphitheater, challenging a law backed by the National Rifle Association, according to the Florida Sun-Sentinel. He has touted his city as a safe zone for undocumented immigrants and has opposed oil drilling in the Everglades. He also supports action to fight climate change, the newspaper reported.

Here's what the rest of the Democratic presidential field was up to this past week.

CNBC reported Wednesday that a Biden presidential announcement could come as late as the end of April, citing those familiar with his plans.

The former vice president also attracted attention for expressing regret over his handling of the 1991 Senate Judiciary Committee confirmation hearings for now-Supreme Court Justice Clarence Thomas, during which Anita Hill accused Thomas of sexual harassment. “To this day, I regret I couldn’t come up with a way to get her the kind of hearing she deserved,” he said, during remarks at the Biden Courage Awards in New York Tuesday, honoring students who have worked to prevent sexual assault.

“You’ve got Joe Biden as the white grandfather in all of this, the white man saying it’s a white man’s culture. Okay. It’s got to change,” Burnett said.

Walsh then replied that she had a way for Biden to make a change.

She then added his treatment of Hill was not going away.

It “will remain a huge issue if he does run,” she stressed.

A CNN town hall in South Carolina on Wednesday touched on a number of Booker’s campaign priorities, including criminal justice reform and the rising costs of health care.

The New Jersey senator said he would “absolutely” consider issuing mass pardons for those convicted of marijuana-related crimes, noting that “there is no difference in America between using and even selling marijuana between blacks and whites, but if you’re African-American in this country, you’re almost four times more likely to be arrested for that.”


Booker also somewhat broke from his past support of the pharmaceutical industry -- which is particularly prominent in his home state -- by pledging not to take money from industry executives and PACs.


Vox has six takeaways from Booker's town hall.  CNBC reports Booker is lining up support from financial industry heavyweights in order to compete in the money game.

Buttigieg had a relatively strong performance in a Quinnipiac University poll released Thursday, polling at 4 percent,which tied him with Sen. Elizabeth Warren and vaulted him into an upper-tier of candidates where in a crowded field capturing more than 1 percent support is hard.

Sports fans who have noticed the resemblance between Buttigieg and Boston Celtics head coach Brad Stevens got a kick out of Stevens expressing his admiration for the South Bend mayor and noting he has “followed him pretty close.” 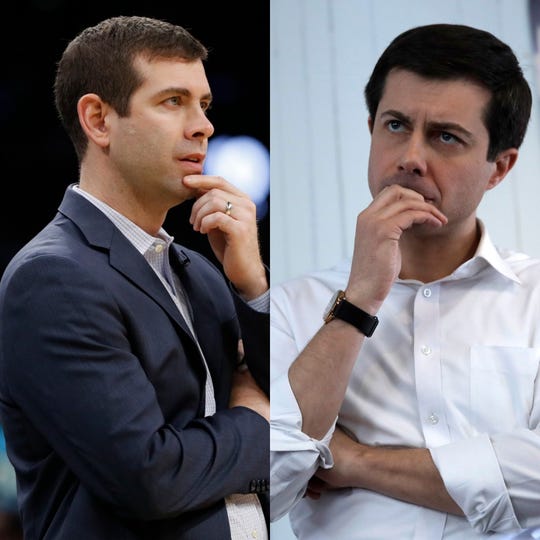 “I’ll be real candid, I love a lot of his platforms. I’m a big fan of his,” Stevens told NBC Sports Boston. “I haven’t endorsed anyone yet, I don’t get into the political stuff too much, but he’s a hard one for me to root against. He’s also rising pretty quickly.”

Gillibrand became the first candidate to release her 2018 tax returns Wednesday, revealing that she earned roughly $218,000 and paid nearly $30,000 in taxes. The New York senator further called on her fellow candidates to follow suit. (Elizabeth Warren’s website includes 10 years of tax returns but her 2018 form has yet to be posted.)

In her first major event since officially joining the race, Gillibrand spoke outside of Trump International Hotel in New York last weekend, where she called the president a “coward” and said she has “stood up against Donald Trump more than anyone in the Senate.”

Harris was in Texas last weekend; Houston on Saturday.  You can find that update within this past Monday's Wrangle.

In a Washington Post op-ed, the former Colorado governor said he supports “the concept of a Green New Deal,” but that the much publicized proposal put forth by Sen. Ed Markey, D-Mass., and Rep. Alexandria Ocasio-Cortez, D-N.Y. “sets unachievable goals.”

“We do not yet have the technology needed to reach ‘net-zero greenhouse gas emissions’ in 10 years. That’s why many wind and solar companies don’t support it,” Hickenlooper wrote. “There is no clean substitute for jet fuel. Electric vehicles are growing quickly, yet are still in their infancy.”

“Amid this technological innovation, we need to ensure that energy is not only clean but also affordable,” he continued.

“This plan is about bringing our country together,” Klobuchar said in a statement. “Building bridges is not just a metaphor -- this is what I’ve done and what I will continue to do as president. ”

After a quiet week following his whirlwind first days on the campaign trail, O’Rourke will hold a trio of kick-off rallies in El Paso, Houston and Austin, Texas Saturday.

Thousands of people are expected to attend each rally, and each is being held in large, picturesque outdoor spaces. In Austin, the rally is taking place in the heart of downtown, with the state Capitol as a backdrop. In Houston, the rally is happening outside Texas Southern University, where 2020 rival Kamala Harris held an indoor rally last weekend.

O'Rourke's campaign is making sure to use the day to mobilize supporters in Texas and far outside it, with volunteers hosting over 1,000 watch parties in every state and territory.


The former congressman finished third in a Quinnipiac University poll released Thursday, garnering support of 12% of respondents, trailing only Biden and Bernie Sanders, who have consistently finished first and second in early primary polls.


"Justice means that we will no longer accept a situation when the top 25 hedge fund managers on Wall St. make twice as much as all of the kindergarten teachers in this country" @BernieSanders in San Diego #BernieInSD pic.twitter.com/pFvmo3BNH2
— People for Bernie (@People4Bernie) March 23, 2019

Hey @BernieSanders crew! I know it's a few days late, but I wanted to share some of my favorite shots from #BernieInLA!

"Every time the people come and say #MedicareForAll is not affordable, here's what we need to point out: the current system, with it's $59 MIL payout to Aetna's CEO, it's $350 BIL to big pharma, and it's $49 TRILLION cost to our economy, is not affordable" @RoKhanna #BernieInSF pic.twitter.com/dTnaqKD2ia
— People for Bernie (@People4Bernie) March 24, 2019


Sanders also told MSNBC Tuesday that he does not support “incremental reform” to improve the Affordable Care Act, only his “Medicare-for-All single payer program” and argued for the complete elimination of private insurance.

In a column in the Des Moines Register, Sanders pledged to support Iowan farmers and take on corporate agribusinesses, writing that farmers have “been systematically stripped of their ability to control their own futures and no longer know whether their hard work will earn them future success and stability.”

“When we are in the White House, we are going to strengthen antitrust laws that defend farmers from the corporate middlemen that stand between the food grower and the consumer, and have now become so big and powerful that they can squeeze farmers for everything they’re worth,” Sanders wrote.

Much like her crusade against some of the country’s largest tech companies, Warren is also proposing that large agriculture businesses be broken up, writing in a blog post Wednesday that “we must address consolidation in the agriculture sector, which is leaving family farmers with fewer choices, thinner margins, and less independence.”


Warren also made a campaign swing through the southern states of Alabama, Mississippi, and Tennessee, discussing poverty, housing, and family farms. The Clarion Ledger:

Warren began a three-state Southern tour with a town hall in Memphis on Sunday night, speaking to about 500 people. The Mississippi leg of the trip started Monday morning in Cleveland, where she met with state Sen. Willie Simmons at the home of civil rights leader Amzie Moore, before discussing poverty and housing issues on a walk to Simmons’ restaurant, “The Senator’s Place.”

Warren recently rolled out a housing plan based on legislation she introduced in the Senate last year, the American Housing and Economic Mobility Act. It’s the latest of several in-depth policy proposals she’s authored, including a universal child care and early education plan she discussed in Memphis.

What can we do to make a real difference in Cleveland, MS where families can’t afford the skyrocketing costs of living expenses? We put more money into housing so everyone can have a safe and affordable place to live. pic.twitter.com/GhRTDKZB75
— Elizabeth Warren (@ewarren) March 22, 2019 Vox: What the 2020 presidential candidates’ logos tell us, explained by design experts

Vox: The one takeaway from every Dem primary poll

Born to Run the Numbers: How to break out from the crowded pack of candidates?  Find "The Most Important Thing"