In their one and only match of the season. 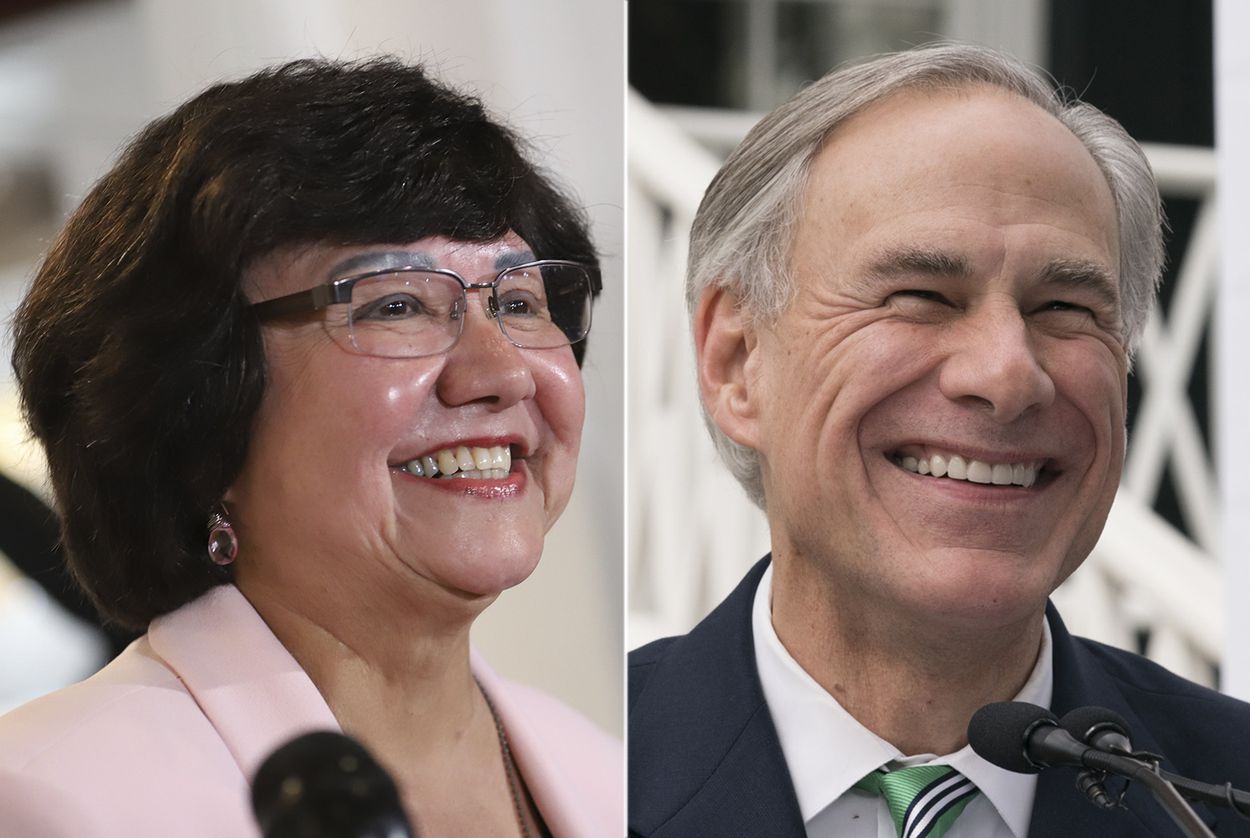 Gov. Greg Abbott and his Democratic opponent, Lupe Valdez, are facing off in their first and only debate Friday evening in Austin.

The hourlong event is set to begin 7 p.m. at the Lyndon B. Johnson Presidential Library, and it is being hosted by the Nexstar Media Group. Nexstar will air the debate on its 12 stations throughout the state as well as broadcast partners in Houston, San Antonio, Corpus Christi and Dallas. Some Telemundo stations will also carry the debate, and a livestream of it will be available on the websites of the 12 Nexstar stations.


I'm hoping she acquits herself well.  A good showing tonight, with some further tightening of the polling, coupled with renewed interest in Latin@s turning out for her would mean the incumbent would have to a) shoot more of his giant wad on himself and less on others; b) put a little fear of Gawd into Gov'nah Holy Roller and compel him to stop ignoring his opponent, as his re-election campaigns have so often done.

But Valdez is prone to the unforced error, as we know, so let's expect that she is prepped but not overly so, calm but aggressive, cool under fire but not blase'.  A tall but not unreachable order.

I've buried the lede here: I'll be voting for Lupe for governor.  I even sent her a small contribution, her fundraising being what it is.

There were obviously plenty of reasons for me not to, and I don't feel like re-listing them.  (Gadfly will probably do that once he reads this.)  There are nearly no options beyond D, R, and L on this year's ballot for statewide candidates, and qualified write-ins are limited to a handful of downballot races.  I'm already undervoting the two federal contests at the top of my ballot, US Senate and Congressional Seventh, along with the Lite Gov and Ag Commish races.  My ballot is going to be pretty thin after I skip so many high-profile matches, employing the only tool the state of Texas allows as a NOTA vote.

What ultimately persuaded me to vote for Valdez was reading, and re-reading, this article in the Austin Statesman a few weeks back, describing her POV as a landlord (lady?).

Colin Howell and Jayme Thompson have a dream to start a mobile food truck — the Flying Pineapple Baking Company — selling retro desserts in Dallas-Fort Worth.

What’s made the numbers work on their ambition is their phenomenal rent — $700 a month for a piece of a fourplex on the outskirts of Oak Cliff’s trendy Bishop Arts District.

“This is Bishop Arts. For what?” Howell said he responded when he was shown the place and told the rent. “It’s like half the price of all the other places around here. It’s great.”

The couple’s landlord — Lupe Valdez, the former Dallas County sheriff and current Democratic candidate for governor — said the low rent was about giving Howell and Thompson a chance to succeed.

For 25 years, Valdez — alongside jobs as sheriff and a federal agent for various agencies, including Customs and Homeland Security — has purchased properties in Oak Cliff, fixed them up with her own money and muscle, and rented them at below-market rates in what she describes as an act of entrepreneurial social conscience and giving back.

“These people are getting an opportunity that somebody gave me,” Valdez said. “You’ve got to pay it forward, except I’m doing it eight times or 10 times more than it was done for me.”


My primary voting issue this cycle is single payer healthcare.  Medicare for All, if you prefer.  'Access to healthcare' is mealy-mouthed consultant-speak for "I'm not supporting that".  (I have already made an exception to this rule for Justin Nelson.)  Close behind that is not voting for Democrats who are loudly pandering to centrist Republicans for their crossover votes.

(Beto O'Rourke has been doing this tapdance on healthcare all year, and seems to have 99% of Texans fooled about it.  Lizzie Fletcher choked on both this week.  Longer post later.)

Lupe wins my vote because she cares about poor people at a time when there are precious few politicians that do.  And she has put her money where her heart is.

That is more than good enough for me.
Posted by PDiddie at Friday, September 28, 2018

Per what you're saying, Valdez needs to be "coached up," and well and thoroughly, for this debate. There's a fine line between that and her coming off as "plastic," though.