Tough day yesterday, with the Q poll showing the Zodiac Killer ahead of Beto by nine points, and then the stunning-not-so-stunning loss by Pete Gallego in the special election to replace convicted felon Carlos Uresti in west Texas.

SD-19's geographics are a close match to CD-23's, so this portends ominously for Gina Ortiz Jones against Will Hurd in 49 days.  She's the one wearing black on Gallego's left (foreground), at last night's wake victory party concession speech. 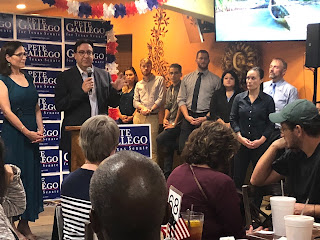 Lots of bragging by Team Pachyderm about the win.  It sets up the Texas Senate nicely in 2019 for a two-thirds majority to ram through their usual agenda of large piles of extremist elephant shit.  Texas Dems got outmaneuvered on the special election cycle (that's how Abbott rolls; he'll do it again to TX-6 as soon as Sylvia Garcia wakes up and submits her resignation in a way he feels is acceptable), and then were outspent and outhustled.


Gallego is a three-time loser and his political career is mercifully over, but hang this loss around the necks of Gilberto Hinojosa and Glen Maxey, who quite obviously didn't see it coming and/or didn't do nearly enough to stop it.  Oh, and maybe Bexar Democrats could stop fighting with each other long enough to mobilize turnout and win an election.  That's probably too much to ask for as well.

Quinnipiac polled likelies, which is a better barometer than 'registered', so this nine-point deficit is blacker than the usual dark cloud.  A week ago, however, Joshua Blank and Jim Henson at the Texas Politics Project -- they're the guys at UT that also do the Texas Tribune's polling -- busted Beto's axles with these numbers.

A series of recent articles focused on Republican concerns over Senator Ted Cruz's reelection chances has Democrats beaming, and national reporters falling all over themselves to get in front of the possible defeat of Cruz in deep red Texas. The attraction of the storyline for editors and reporters is obvious enough, and poll numbers showing low single-digit leads for Cruz provide a ready rationale for ever more breathless speculation on Beto O'Rourke's chances of pulling off an upset. But a look at recent election outcomes and some simple back-of-the-envelope math highlight just how unlikely an O'Rourke victory is in Texas.

While "unlikely" doesn't mean impossible – this is where we usually insert something about a "non-zero probabability" – the magnitude of the change in the patterns evident in recent Texas elections would have to be historic. If we consider recent midterm elections since 2010, the average Republican vote total has been 2,798,519 votes, which we can round to 2.8 million for simplicity. The average Democratic vote total in those races has been 1,846,459, which we can round up to 1.9 million (again, for simplicity). This means that Democrats, on average, have to make up approximately 900,000 votes to get in the range of a tie in Texas. What would this take? (The table below also includes presidential results from 2016, just to provide context, though those results are not factored into these averages).


Go look at the table at the link.  The bold emphasis next is mine.

A good starting point is one of the underlying assumption of many assessments of O'Rourke's chances: the potential migration of votes from the expected GOP vote either to O'Rourke or to the Texas army of the non-voting. The most recently released poll, as of this writing, showed 15 percent of likely Republican voters saying that they'll cast a vote for O'Rourke. According to a few different analytic approaches using University of Texas / Texas Tribune polling data of registered voters, as well as Texas Lyceum data of registered and likely voters, the size of the poll of potential Republican cross-over voters is probably closer to 6 percent. This estimate is drawn from current polling, which almost certainly reflects a different underlying population than the likely electorate once general election voting begins, so the size and magnitude of the shift in this data may or may not emerge in actual voting. But assuming just for the sake of this exercise that O'Rourke has or will convince 15 percent of Republican voters to cast a vote for him (which would be quite impressive), we can subtract those votes from the average Republican vote total and add them to the average Democratic vote total, resulting in 420,000 votes shifting to the O'Rourke column. This would cut his likely deficit to 480,000 votes.* While this 15 percent estimate seems high given the context (and divergence of) the polling data, it tests the outer limits for one of the clear concerns of Republicans in Texas and elsewhere: the possibility of either a lack of enthusiasm or outright discontent leading to an increase in Republican non-voting among usually reliable midterm voters.

In addition to discontent with Cruz amongst Republicans, O'Rourke would also have to turn out Democrats at significantly higher rates than normal. So let's assume, again for the sake of argument, that Democratic turnout increases by 20 percent, which would add another 380,000 votes to O'Rourke's total. Even under this optimistic scenario, combined with the outer-bound estimate of Republican defections, this surge in turnout would only result in a decrease in the overall expected gap between O'Rourke and Cruz to 100,000 votes – a little more than 3.5 percent under our rough turnout assumption – still in Cruz's favor.

This simple, back-of-the-envelope calculation using incredibly optimistic expectations (if you're a Democrat) about the electorate shows why, when experts are asked about O'Rourke's chances at toppling Cruz, they are so cautious in feeding the hype. Even under extremely rosy circumstances, O'Rourke needs BOTH a momentous shift in voter sentiment, AND a momentous shift in Democratic turnout: possible, but still not probable.


Given the trend lines revealed last night, some anecdotal evidence like this from RG Ratcliffe at Texas Monthly, and our election in Texas may be over before the voting begins.  (Aside to Frances at Crooks and Liars: No, this is not how Beto will win Texas.  GOP crossovers are not enough.  He needs engorged voter turnout, most of it from Latinxs, and he is probably not going to get it.)

Guess we'll wait for Kuff to lengthily excerpt something tomorrow the Houston Chronicle published this morning on both these topics.  This is all he's good for today on the SD-19 result, though he expressed confidence yesterday morning about the outcome, which looks laughable in hindsight.  In the meantime, Gilbert Garcia for the SAEN breaks down how Flores won.

He's also mocked out the latest NYT poll result for TX-23 -- Hurd 51, Ortiz Jones 43 -- which likewise appears almost ridiculous now in the morning after the SD-19 debacle.  Maybe it's a good thing he has nothing to say yet about the Q poll.

(Lately I'm just embarrassed for that guy and his blog.)

Texas Democrats need to use these two items as a serious wake-up call for November.  Can they get their act together and salvage some wins before the GOP breaks the Blue Wave completely here?

Not looking too hot this morning.

Update: Shortly after this was posted, a Reuters/Ipsos poll was released showing Beto with a two-point lead over Cruz among likely voters.  Somebody has to be an outlier; maybe both.  An 11-point swing between two typically highly-regarded pollsters, taken back-to-back, is patently absurd.  This is the sort of thing that makes me question the validity of polling science altogether.  Look for heavy spin -- translation: fundraising emails in your inbox.  FWIW, Reuters has Greg Abbott leading Lupe Valdez 50-41, matching his smallest lead to date.  So this is either grand news for Team Donkey (only English speakers were polled) or there's some false hope being generated.  I report, you decide.
Posted by PDiddie at Wednesday, September 19, 2018

Second, they are right to note that the figures in their scenario are unreasonably optimistic. When self-identified Republicans actually get to the voting booth, most will still vote Republican, regardless of what they told the pollsters—or undervote that race—just as scared-shitless Progressives who tell the pollsters they're voting Green will revert to old habits & vote Democrat.

Here we go again, huh? Every two years, we're told that this is the election cycle when Texas goes purple, and every two years, the results are pretty much the same.

I just posted that comment and then found a Reuters/UV poll that has Beto ahead by three points.

OK, caught up to speed. Wonder when the first post-debate polling will come out. With Beto, it's fundraising texts as much as emails; he is indeed, as reported, heavy on this.

And, something is screwy indeed if Valdez is within 9 points.

Oh, per 538, Vox Populi, a day after Ipsos, has the Abbott-Valdez gap at just 10 points. So, who knows? https://projects.fivethirtyeight.com/polls/governor/texas/