So what can Texas Democrats do to save 2018 before it's too late?

I don't think success is going to depend on more people like me holding their noses and voting for Democrats who are busy chasing disillusioned Republican crossovers.  I expect the black vote will be there for the Donks, more so than it was in 2016.  Not in cumulative, this being a midterm, but in percentage and intensity, partly driven by the castigation -- or remorse -- from sitting out the presidential election two years ago, and partly by circumstances of the past few years: #BlackLivesMatter (from Texans Sandra Bland in 2015 to Botham Jean this month), Colin Kaepernick's protest twisted out of context, efforts to end the practice of cash bail gaining steam because of the deaths it is causing, and similar issues of concern to POC.


Find them all here.

So that leaves one large, mostly untapped demographic.  The ones Democrats have been waiting on for several election cycles now. 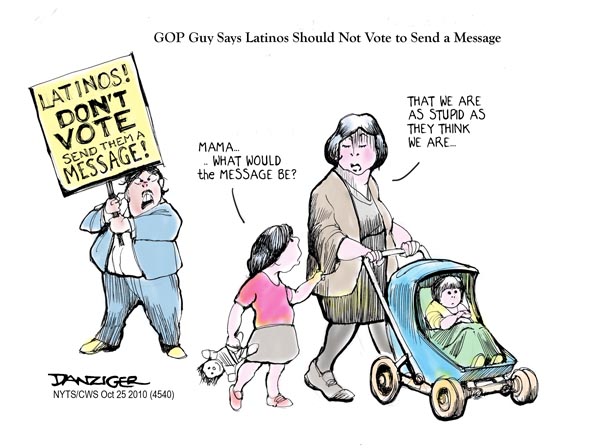 Note this cartoon was first published in 2010.

-- Take this, from Rafael Medina, the Senior Media Coordinate at the Center for American Progress Action Fund and posted at Latino Rebels, to heart.

The 50th anniversary of Hispanic Heritage Month kicked off this week. It is a commemorative month during which the United States celebrates the diversity, heritage, and accomplishments of Hispanic and Latinx Americans.

The Hispanic and Latinx community that I know is vibrant and thriving; through our deeply embedded, rich histories and culture, and through a relentless faith in the American Dream, we keep our nation’s legacy as a beacon of opportunity for all who live. We drive the economy with our entrepreneurial talents, enrich the arts and humanities, and have had a lasting impact in defending the nation’s most cherished ideals, leading the way for social and political progress.

While it’s true that the Trump administration presents an exceptionally challenging moment, we are resilient, and our collective voice is powerful. And what better way to celebrate this great truth than to leverage our tremendous potential to influence policy by registering to vote? In the face of constant attacks, we cannot afford to leave our power on the table.

Donald Trump’s presidency is marked by attitudes and policies that disregard our contributions and dehumanize our communities. This was very clear from the day he announced his presidential bid, immediately characterizing Mexicans as criminals and rapists.

While still on the campaign trail, then-candidate Donald Trump repeatedly belittled congressmen, judges, and journalists of Latino descent. And after losing the popular vote, he falsely accused millions of people of voting illegally against him and even created a voter fraud commission that was later disbanded with nothing to show for it because he had no evidence of this.

All the while, Trump’s statements and policies have only become more inflammatory and racist under his benighted presidency.

Just ten days before the President proclaimed Hispanic Heritage Month last year, his administration announced plans to end the Deferred Action for Childhood Arrivals (DACA) initiative, upending the lives and livelihood of more than 800,000 Dreamers. The Trump administration then decided to terminate Temporary Protected Status (TPS) for individuals from El Salvador, Honduras, and Nicaragua, resulting in the loss of status for 250,000 immigrants that have been living and working in the U.S. lawfully for approximately 20 years and are parents to more than 246,000 U.S.-born children. And although the administration may be hoping people will forget about its decision to take more than 2,600 children away from their parents at the southern border, today more than 400 children remain separated, including children under the age of 5. And in place of separating children, the administration last week issued a proposed rule that it hopes will allow it to incarcerate children with their parents indefinitely.

And we now know that Donald Trump manipulated the budget process to divert nearly $10 million in hurricane preparedness funds so that he could continue his racist abuse against immigrant families. This came only hours after saying the response to Hurricane María “was an incredible, unsung success,” and after it became public that his administration’s FEMA has approved only 75 out of 2,431 requests for funeral assistance from victims of María. Trump has repeatedly demonstrated his contempt for Puerto Ricans by claiming to the American public that María was not a “real catastrophe,” and lobbing rolls of paper towels as if he were shooting baskets, and as if they were sufficient to remedy the lack of real aid for which his administration was directly responsible. Since then, thousands of displaced Puerto Ricans have come to the mainland because of the administration’s criminally neglectful and morally corrupt response to María’s enormous devastation, and nearly 3000 American citizens in Puerto Rico died as a result—a figure that Trump shamefully questioned.

From immigration to Puerto Rico to criminal justice to voting rights, the Trump administration has acted in direct opposition to our shared interests. And while the Trump administration may continue to disregard our livelihood, vilify and dehumanize us, it will never diminish our self-worth. We are bigger and more determined than his callous indifference to our pain and suffering.

It’s time for a change in leadership.

This Hispanic Heritage Month, we will celebrate by reminding each other of all the elected officials who treated us like second-class citizens under Donald Trump’s watch and by making plans to vote only for those who have our best interests in mind.

It is our legacy of perseverance in the face of adversity, of fighting and securing success for our families and communities in the future, that we celebrate this and every Hispanic Heritage Month. And that legacy will live on.

That’s why, this cycle, we are seeing an unprecedented number of Latinos running for office. But this is not enough. If we do not register to vote, we will never be able to hold the Trump administration accountable.

National Voter Registration Day is September 25, and it’s the perfect opportunity to demand leaders who recognize our tremendous contributions to this nation. Our community deserves leaders who are firmly committed to supporting and fighting for policies that open doors for us to realize all our talents and succeed, treat us with respect and dignity, and carry on our legacy to build a brighter future.

Together, we will overcome the constant threats from Donald Trump and his allies.


It's true that Harris County's Latin@ turnout almost tripled over 2014 (based on surnames, which is a tenuous proposition; absent better measurements, the best we have), but that does not appear to be enough to crest the blue wave.  Democrats need RGV Latinxs in the worst way, and it's also true that there are unregistered Latinx voters in every corner of the state.  Texas is officially dead last in voter turnout and any path to victory starts with getting more people of every age and color and gender registered to vote.

So here's some unsolicited advice for all you people working hard to get your Democrats elected from a former Democratic precinct chair (in three different southwest Harris County precincts), the 2006 statewide coordinator for the David Van Os for Attorney General campaign, a former election judge on the Harris County Ballot Board, a volunteer on too many campaigns to remember and a financial contributor to even more, but since 2014 a gradually greater disillusioned Democrat, to the point of being a Harris Green Party member and supporter.  Take it for it's worth to you.

-- Note Stace's resentment as a clue and act on it; Latin@s are going to have to be begged to vote for Democrats.  So if you're a candidate, or working for a campaign, or just a precinct chair trying to turn out your neighborhood's vote, and up to the deadline to register to vote in the November election -- October 9, thirty days before Election Day -- start begging.  Statewide candidates and campaigns should take all the money they have and run ads on Spanish language media, beginning if possible with the Beto-Cruz debate this Friday night on Telemundo, TeleXitos, or any of the other the Spanish-language media outlets across the state broadcasting it (courtesy Mike McGuff).  The same goes for Lupe Valdez's debate with Greg Abbott on September 28th.  If all that can be afforded is a few radio spots in the RGV, then do that.

In the Houston media market, Telemundo was the highest-rated television station in the last reporting period among adults from sign-on to sign-off (somewhat on the strength of World Cup coverage) regardless of language spoken.  I have little doubt that the same is true of the local Spanish language broadcaster in every single MSA across the state.

-- Mobilize ground troops to register voters.  This event is a must for every campaign, statewide and local, in Houston.  HCDP has a million things you can attend this weekend, but if you're smart about it you'll go where the mostly non-voters are and not where your friends are going.  There'll be time to chat and brunch in about seven weeks.  Leave it all on the field or cry about it in November.

Get voter registrars in Fiesta stores, the local mercados, Catholic churches, the East End in Houston (and typically other Texas cities as well), the barrios in cities large and small, up and down Texas.  Hook up with another Latinx candidate -- or anybody who speaks Spanish, but a brown face is recommended -- and knock on doors.  NO phone calls, please.  A desire for worn out shoes and calloused knuckles are what's needed.

Once the registration deadline has passed, then it's all hands on deck for GOTV.  For the next 2.5 weeks, the electorate must be expanded.