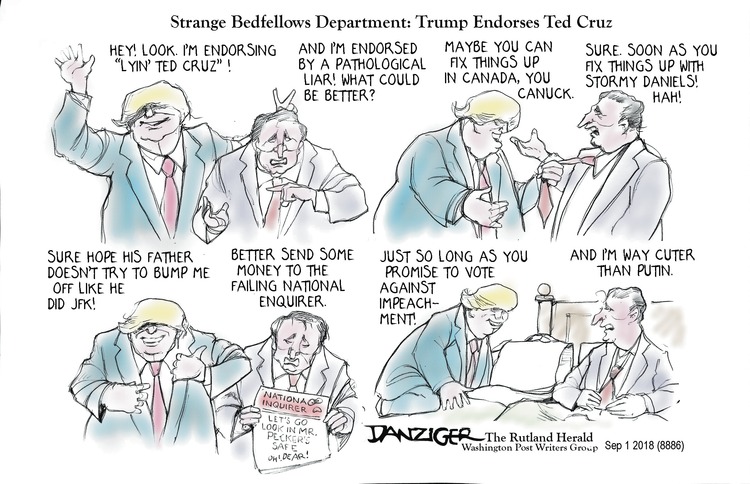 Post-Labor Day ads are allegedly shifting into high gear; thank Jeebus I have that crap blocked online and don't watch any teevee channels where I would be subjected to it.

Beto's Ellen appearance (two short videos there; you should watch them) got swamped by Trump's meltdown over Bob Woodward's book and the Kavanaugh hearings.  I thought he would get more mileage out of that; maybe he is, or will.  Debates seem to be on the backburner.  Maybe that will also change next week.  This week I'm of the opinion that O'Rourke is going to have all the money he needs in order to win, so he might not have to debate Cruz, who could score too many points against him in a Jimmy Kimmel, one-on-one, hoops challenge kind of way.  The Zodiac Killer could -- theoretically -- snuff the rising star with just a few well-placed shots, puns intended.

Let the skirmishes play out on Twitter, with Avenatti's publicity-hawking rally countering Trump's and the crowd-funded billboards featuring poorly-aged Trump Tweets and such.  Playing Mr. Nice Guy, staying above the fray, is a winning strategy.  So far.

But I still can't see a path to casting a ballot for him no matter what the polls say or how close the race gets.  I'm forced to undervote the US Senate race, as Alyson Kennedy did not qualify even as a write-in.  I reached out to the Dallas SWP last week for comment; no response at post time.

That leaves Bob, Ted, and a Libertarian (TexTrib's list matches the one at the SOS website).  I'm taking a hard pass on all of that.
Posted by PDiddie at Thursday, September 06, 2018

I am siding with you on debates.

Let's note that Beto wanted three changes:
1. Not on Friday nights, which I've kind of dismissed
2. Some changes in debate focus/material
3. Format changes, ie, most of them as town hall styles.

And I think that's the biggie. In something close to an actual HS or college debate (which presidential "debates" aren't) Ted would probably kill him indeed.

The town hall talking with the audience joint campaign appearance "debate"? Robert Francis Kennedy O'Rourke would be at his best and Havana Ted at his worst.

I will still undervote, too. I'm becoming a semi-single issue voter on single payer. And, despite Beto brainwashing his volunteers, and getting Sema as party loyalist to muffle herself (and on Twitter, getting that Scap guy to claim that Beto supported Bernie's weaker bill, which he does not and I told Scap that), you, I, and the educated doorknob know that Beto ain't there.

I like all your Democratic candidates ads on your blog. So hate them but take their money?

Nobody's paying me anything for those (or anything else that appears here), Manny.

You need to try a little harder to understand that I don't hate, either. It's unhealthy.

"Don't like" is softer, so the ads for Democrats you place there?

But for Bernie Supporters who voted for Trump, we would not be looking at a new very conservative court.

Not having the benefit of white male privilege, such a court bothers me.

I do not find this response coherent. Still, I'll respond as best I can.

1. Consider the "ads" as my endorsement (I have blogged about this in the past and will again, a bit closer to EV). The images link to the candidates' websites. Mouse over and click.

2. Your second statement is a non sequitur. And probably inaccurate; "Bernie supporters who voted for Trump" -- a pretty small number of voters -- "we would not be looking at a new very conservative court".

3. Even with the benefit of white privilege (I am guilty) such a (Supreme) Court bothers me a great deal, because I am not conservative.

Manny, Bernie "bros" who voted for Trump have been shown, by evidence, to be far fewer than Hillary's PUMAs who voted for Warmonger John McCain in 2008. I thought maybe you had turned to dust or something. Brains probably hoped so.