The last time I blogged about this topic, over a year ago, it became the fifteenth-highest clicked post in the sixteen-year history of Brains.  I'm tempted to excerpt myself, since I said it all so well there, but I'll leave readers the choice of re-reading me. 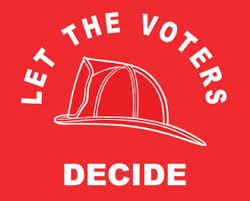 Little has changed in the past fourteen months.  The petition's signatures to get on the November ballot were finally approved, after some typical slow-walking through City Secretary Anna Russell's office; Sylvester Turner and the Democrats on City Council -- a majority -- are still opposed and speaking ominously about layoffs of police and firefighters if it passes; and the proposition remains likely to sail through in resounding fashion, leaving Mayor Turner and Council with their bluff called.

Sunday before last, Turner wrote his op-ed in the Chron against it ...


Please read my op-ed in today’s newspaper. I support firefighters, but Prop. B is bad.
I have negotiated successfully with city workers and police officers on pensions & pay raises. I know the city cannot afford a 25 percent raise for any employee group. https://t.co/vSRuXmAFFp
— Sylvester Turner (@SylvesterTurner) September 16, 2018


... and so did Patrick 'Marty' Lancton of the HPFFA, obviously in favor.

Turner blames the city's revenue cap, the previous (Annise Parker) administration for leaving him this landmine, and of course, the firefighters themselves for being greedy.

For Houston firefighters, the last decade has been difficult as we watched our pay dramatically erode. As the city of Houston found ways to increase pay for police officers by 30 percent since 2011, our pay rose by only three percent in that time. One Houston firefighter was even featured on a poster for federally supported Section 8 housing.

By voting “yes” for Proposition B in the November election, voters can help take the politics out of public safety in Houston. Firefighters have asked the city for competitive pay and better working conditions for several years. This followed our giving the city major concessions after the economy collapsed in 2008. City promises of better pay when the economy improved were not kept.

Instead, city politicians refuse to equally value the service and sacrifices of Houston first responders. Now, too many Houston-trained firefighters are leaving for other departments around the nation, including suburban departments that pay almost twice the starting salary as Houston.

Some suggest fire and police jobs are different and should not be linked by pay. In fact, fire and police are paid equally on a rank-by-rank basis throughout the United States — including in New York, Los Angeles, Chicago and Dallas. ... [I]n Houston, the pay of City Council members is linked with that of local judges. What nobody mentions locally anymore is that police and firefighters had pay parity for many years here — at the request of police. HPD has long fought with HFD over trivial matters, like resentment over the fact that firefighters can sleep on the job, while police officers get fired for doing so.  Terminations of cops are, of course, at the heart of the police officers' objections to the firefighters' pay parity proposal.

In June, a scientific survey was taken of Houston residents. More than 75 percent of the surveyed citizens supported compensating our fire and police professionals equally. They recognized that the requirements and risks of the two jobs are similar, and they viewed the issue as urgent. The same was true of the 60,000 Houston voters that signed petitions — in record time, just over a week — to put the pay raise on the ballot.

If the city had certified the signatures on time, in accordance with the law, this election would have been held last year. Instead, some city politicians chose to punish firefighters for seeking voter help. It actually took an order from a state district judge to compel the city to obey the law and certify the petitions and hold the election.


The city of Houston has acted, and has continued to act, in bad faith throughout this years-long, multiple-administration process.  And they're about to get their asses handed to them because of it.

Here's the website supporting Prop. B and here's the one opposing it.  If you're truly on the fence, then spend some time on both.  Oh yeah, here's Turner-vanquished Bill King, wringing his hands and clucking his tongue about this sorry state of affairs as he votes for the firefighters.  His answer would never be to raise any taxes, of that you can be certain.  He's the same old monkeywrench in the gears he's always been.

I had the following Twitter exchange with former Mayor Parker in August; it encapsulates our respective thinking-- along with local establishment lackey Erik Vidor's, who chimed in to support Parker -- perfectly.  (The deleted Tweet Parker was responding to contained some animus from a firefighter about the tone of of previous negotiations. Click to open the thread for all responses.)


I’m fascinated by this trope that if management bargains hard at the table with labor you must hate them. No. It’s business. You want things—I want things. None of the other union bargaining teams I faced ever took it personally. https://t.co/u0QRgdxfOg
— Annise Parker (@AnniseParker) August 10, 2018


Mayor Turner and the Democrats on Council have everything at stake here, because they are too frightened to raise revenues, either by establishing a vote to eliminate the revenue cap or by instituting an increase in sanitation or water fees.  They cannot make the arguments in favor of paying for a fair salary increase for firefighters, so they recycle the same scare tactics used in the police pension negotiations.  Nothing but Republican-styled fear-mongering: layoffs, services cut, etc.  Neither their enemies nor their allies are buying their cowardly bullshit a second time.

Some of them will be turned out of office in 2019 because of it.  And they deserve to be.

Perhaps then we can elect some Democrats who remember how to govern like Democrats, and not like Republicans.  Perhaps we'll even elect a progressive independent or two.

Vote for the firefighters and let the neoliberals fend for themselves.
Posted by PDiddie at Tuesday, September 25, 2018