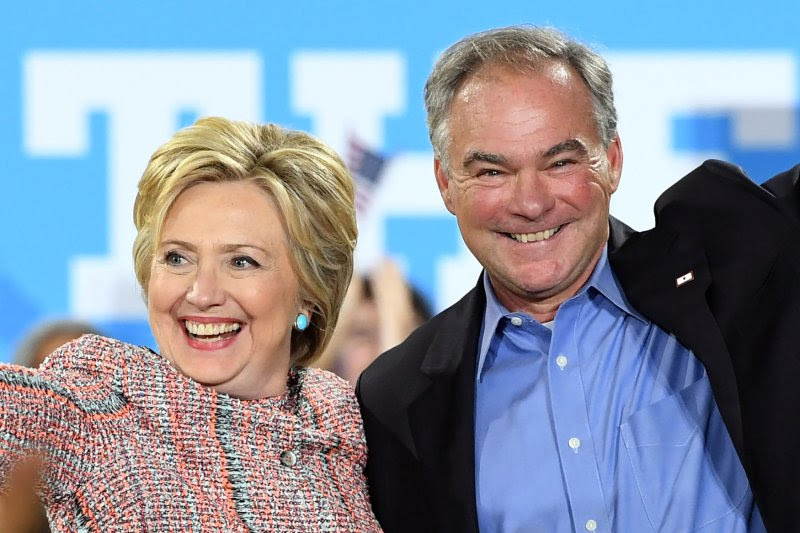 Not exactly the candidates for the working class.

Kaine has expressed vocal support for free trade pacts that have become a central economic issue in the campaign, and one on which Clinton has had a complicated history. She voted against the only free trade deal to come before the Senate in her eight years there, the Central American Free Trade Agreement, or CAFTA, but Bill Clinton negotiated and pushed through the precursor, the North American Free Trade Agreement. Now, more than six in 10 Americans believe NAFTA has resulted in U.S. manufacturing jobs to move to Mexico, a partner in the agreement.

Additionally, as secretary of state, Clinton supported the Trans-Pacific Partnership, a trade deal negotiated by President Barack Obama. Now as a candidate she has indicated she would be unlikely to support it in its present form because she said it lacks sufficient environmental and labor protections for U.S. workers from cheaper-cost Asian nations.

Kaine voted to fast-track approval of TPP in the Senate last year and has defended NATFA.

Feels like a slap in the face, doesn't it Berners?

(Kaine) is setting himself up as a figure willing to do battle with the progressive wing of the party. He has championed the Trans-Pacific Partnership trade deal that both Sanders and Warren oppose, and he is now publicly siding with bank deregulation advocates at the height of Clinton’s veepstakes.

The big bank letter would help major firms including Capital One, PNC Bank and U.S. Bank, all of which control hundreds of billions of dollars in assets. Such large “regional banks,” Kaine writes, are being discriminated against based solely on the fact that they are so big.

In a letter to Federal Reserve Chair Janet Yellen, Comptroller of the Currency Thomas Curry and FDIC Chair Martin Gruenberg, Kaine argues that it is unfair for these large banks to be required to calculate and report their liquidity ― a critical measure of risk ― on a daily basis. Kaine wants to change that reporting to once a month. Kaine, along with Sens. Mark Warner (D-Va.), Gary Peters (D-Mich.) and Robert Casey (D-Pa.), argues that bigger banks don’t necessarily carry bigger risks, and thus shouldn’t face more aggressive oversight.

“This distinction is applied unevenly across regional institutions despite similar risk profiles, simply by virtue of an asset threshold,” the letter reads. Translation: just because they’re big, doesn’t mean they should be regulated more closely.

So I'd have to say that I would find myself surprised if a majority of Berners are so scared of Trump that they fall in line behind a Clinton-Kaine ticket.  But not all that surprised, knowing Democrats as I do.  The binary thought process is strong with them.

Per Twitter, I'm blogging about the religious bigotry angle from Wikileaks AND what bits i found out about the woman who asked Bernie that Flint town hall question. Going up tomorrow morning.