The literal shitshow in Cleveland

It's understandable that some of those in attendance at Quicken Loans Arena Tuesday evening were on the edge of their seats; they might very well have had to rush to the toilet at any moment.

A gastrointestinal outbreak that could be norovirus has spread to almost a dozen GOP staffers from California at the Republican National Convention.


The show must go on.

The second night of the 2016 Republican National Convention centered on the GOP disdain for presumptive Democratic presidential nominee Hillary Clinton.

While Tuesday’s theme was billed as “Make America Work Again,” almost everyone who appeared on stage offered criticism for Clinton, bashing everything from her email scandal to her accent. A video called “Hil-LIAR-y” played early in the evening, and there was vigorous fault-finding with her resume.

There was far more focus on the contempt for Clinton than on any admiration for Donald Trump, who was formally named the Republican nominee for president earlier in the evening and briefly appeared via video, thanking supporters.

Several of the night’s big-name speakers barely acknowledged Trump, including Senate Majority Leader Mitch McConnell (R-Ky.), who said Trump would sign Republican-backed bills and fill the seat of the late Supreme Court Justice Antonin Scalia, but little else about the business mogul.


This was expected.  Ryan and McConnell are putting on a brave face, having desensitized their own nausea at the prospect of their majorities in Congress going down with the Trump-tanic in November.  And Chris Christie reminded us again that he was once a federal prosecutor, livening up a morose crowd with a mock trial of the Democratic nominee.

“We’re going to present the facts to you, as a jury of her peers, both in this hall and in living rooms around our nation,” the former 2016 presidential candidate said in opening his address to the Cleveland convention Tuesday night.

“I’m going to render a case on the facts against Hillary Rodham Clinton,” he continued.

Christie made the case that Clinton’s character and her record as secretary of state disqualify her for the nation’s top job, specifically accusing her of “ruining Libya,” being a terrorist apologist for not naming an al-Qaeda affiliate in Nigeria a terrorist group for two years and linking that to the “Missing Girls,” and turning previous words of praise for Syrian President Bashar al-Assad against her.

As Christie made his "case," delegates on the convention floor periodically broke into chants of “Lock her up, lock her up!”

But it was Ben Carson who went off script and delivered the most searing and Biblical condemnation, pulling out the old "she's the devil in disguise" routine.

In a bizarre, meandering departure from his prepared remarks, Dr. Ben Carson suggested that electing Hillary Clinton would be the same as endorsing the devil himself.

Speaking near the end of Day Two at the Republican National Convention former rival of nominee Donald Trump, Carson brought up Saul Alinksy, the community organizer whose work Hillary Clinton wrote about while at college in Wellesley.

“Her senior thesis was about Saul Alinsky,” said Carson. “This was someone that she greatly admired and that affected all of her philosophies subsequently. Now interestingly enough, let me tell you something about Saul Alinsky: He wrote a book called “Rules for Radicals.” On the dedication page, it acknowledges Lucifer, ‘the original radical who gained his own kingdom.’”

Carson has been the conduit for evangelical Christians throughout the 2016 cycle and has managed to channel that fervent support to Trump without any examination of the Republican nominee's glaring spiritual shortcomings.

Carson’s riff on Lucifer was not part of his prepared remarks distributed to reporters earlier Tuesday night, nor did it appear on the teleprompter in the arena. But it was not the first time he has mused on a Hillary Clinton-to-Saul Alinksy-to-Satan connection. Just last month, Carson launched into a similar digression a the New York City gathering where conservative evangelicals met with Trump.

When asked by a reporter earlier Tuesday what he planned to talk about in his speech, Carson replied, “Only God knows the answer to that.”

The journalist's request for comment was referred to Carson's deity, but received no reply prior to Ben taking the stage.  At least the brain surgeon didn't plagiarize anybody, which was a controversy that arose again during another Trump's speech.

For the second night in a row, a speech given by a member of Donald Trump's family is raising eyebrows for lines previously used elsewhere.

Donald Trump Jr. in his headline address at the Republican National Convention in Cleveland delivered a near-exact repetition of a small part of an American Conservative article written by F.H. Buckley, titled "Trump vs. the New Class."

"Our schools used to be an elevator to the middle class. Now they're stalled on the ground floor. They're like Soviet-Era Department stores that are run for the benefit of the clerks and not the customers," Trump's son said in his speech Tuesday night.

The line in Buckley's article reads, "Our schools and universities are like the old Soviet department stores whose mission was to serve the interests of the sales clerks and not the customers."


Some people don't think plagiarism is a big deal.  Those people are wrong. 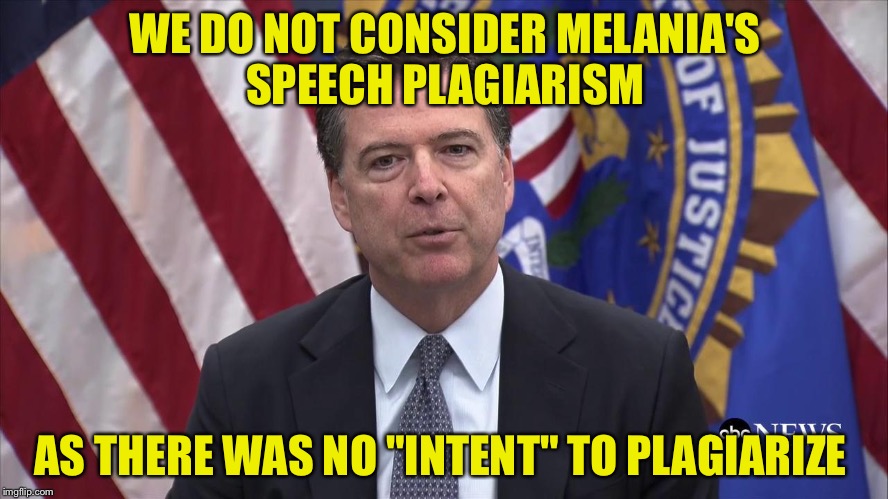 This is why I don't think Hillary is going to name Julian Castro V-P; because of the prevailing concept of injustice that some crimes simply aren't based on the person who commits them.  Castro won't be prosecuted for violating the Hatch Act, you see, just as former HHS Secretary Kathleen Sebelius skated away from the same violation.  But like hers, his political career is probably over, and certainly any shot at a promotion.  "Clinton-Castro" feeds the repetitious and unfortunate narrative that certain people are above the law.  The more common examples of this outrage are the white police officers who shoot or strangle black people to death every week in this country, but those who protest the killings or videotape the encounters are convicted and jailed.

So while last night's RNC spectacle was hyperbolic and overblown, it wasn't a false narrative.

Day 3 will pick it up with V-P nominee Mike Pence, more of Trump's vanquished rivals (Scott Walker, Ted Cruz, Marco Rubio), and the speaker most likely to go over the top, Newt Gingrich.  But if you decide to watch anything tonight, catch Cruz.  He's busy setting himself up for 2020.

Personally I never turn on my teevee for these productions; I just follow the #RNCinCLE Twitter feed.  It keeps my own gastric distress to a minimum.
Posted by PDiddie at Wednesday, July 20, 2016