But not black men.  Alton Sterling and Philando Castile are the names of the latest victims in a continuing national tragedy.  The police aren't reforming themselves, so someone is going to have assist them.  When order is more important than justice, then disorder is compelled.  And I sure hope nobody is stupid enough to put me on a terrorist watchlist for making a simple observation.

Because that would indicate that the police state is farther along than even I suspected.  It would suggest that we are moving closer to the Israeli model, in fact.

-- The corporations want to do the two major party conventions on the down-low.

(M)any special interests, from Comcast Corp. to financial giant JPMorgan Chase to insurer Blue Cross Blue Shield, will participate in convention-related activities, but they’ve become more creative in how they influence conventioneers — or are altogether refusing to discuss their convention plans.

“They want to show up, they want to rub elbows with everyone at the conventions, they just don’t want the corporate name out there,” said Craig Holman, a government affairs lobbyist for advocacy group Public Citizen, who has long tracked influence efforts at the conventions. “They’ll be looking for lower-key ways of doing the same thing they’ve always done.”


-- And let's update here instead of there that Mike Pence has moved into the lead in the GOP veepstakes.  Marc Belisle at Reverb Press is searingly on point.

Newt Gingrich and Chris Christie have egos and ambitions at least as great as Trump’s. The businessman may appreciate their input on the campaign trail, but the possibility of a right hand man who could eclipse him politically would be too much for the insecure narcissist. Besides, both Gingrich and Christie are too savvy to want to be sidelined in the VP spot. Gingrich is probably angling for something like Chief of Staff. And for the sake of irony, let’s say Christie is gunning for Secretary of Transportation. If Trump loses in November, they can say they were just advisers and Trump didn’t follow their advice. If nothing else, they glide into a 7-figure lobbyist gig.

Pence, on the other hand, has little to lose, since he’s in trouble in his reelection bid in his home state. He’s the kind of man Trump could have in his pocket, since he would owe his political life to the New York businessman. Pence could help Trump in the Upper Midwest, which is where the Republican candidate needs to win to have any chance in the Electoral College. Pence would also help Trump woo evangelical voters, a key Republican voting bloc that Trump has had difficulty connecting with. Finally, if they get to the White House, Pence can work his contacts in Congress, especially the House, since he served there for 12 years, including a 2-year stint as Chairman of the House Republican Conference.

A Pence nomination would open Trump up to attacks on the governor’s record of forcing far right religious legislation on his state while ignoring its serious problems. But that itself could bring the evangelicals on board. This is the kind of match that Christie, Gingrich and adviser Paul Manafort would likely push Trump to make. If the Republican presidential candidate were a wiser, less petty politician, he might choose a running mate like New Mexico Governor Susana Martinez, who would address a lot of his electoral problems. But he aggressively alienated her. His options are narrowing. Trump and Pence are drawn to each other for complex reasons. With time running short before the convention, and a bruising general ahead, Pence might be the best Trump can do now, if he’s acting rationally enough to make that decision.


The most difficult thing for Drumpf to do is take advice -- aka cautions, warnings, etc. -- from other people, those who know more about something than he does.  He's never lived his life that way.  Pence as VP would be a master stroke because the Indiana governor is the same kind of Teabagging extremist that Cheeto Jesus is without the bombast.  A formidable ticket it would be.

-- And to that end, it's always useful to take stock of what the conservative teevee talking heads are saying.  Mark Halperin, my go-to guy when I want a shitty-ass politico's insights that I never would have considered.

Among other things, Trump doubled down on his praise for former Iraqi dictator Saddam Hussein, expressed regret for deleting an anti-Semitic meme circulated by white supremacists, and announced that he wants convicted murderer Don King to speak at this month’s Republican convention.

Any normal person who watched the speech thought it was a train full of flaming dumpsters crashing into a dumping ground for nuclear waste.


As Trevor Noah said, "the week Hillary Clinton narrowly avoided indictment was a bad week to praise Saddam Hussein".  (As if there was ever a good one.)

“Morning Joe,” however, wondered if it was an indication that Trump was “getting his groove back.” Frequent guest Mark Halperin seemed to think the answer was, “Yes!”

“There’s no conventional political consultant in either party who would have approved that speech,” Halperin acknowledged before gearing up to praise Trump. “But… if he’s going to win, it’s going to be with that, with vintage Trump, where he not just energizes people, but also confident, also entertaining, and also with an ability to convey to people that he’s different. That he’s not going to be politically correct or business as usual.”

Halperin also predicted that if Trump kept making speeches like this — along with picking a good running mate, having a good convention and winning the first debate against Hillary Clinton — he’d “go ahead in the polls.”


I got nothing, except a little gnawing feeling he might be right.

-- I won't belabor the Clinton email matter much after today, but this needs to be documented.  The intent or mens rea determination that prosecutors make when faced with a close call on a target's crimes -- or lack thereof -- isn't based on probable guilt but the odds of conviction.  Prosecutorial discretion is essentially an 'is this worth my time and effort' query.  This turns out to be one of the core pillars of our criminal justice system.  If it looks like it's crumbling to you, as it does to me, we might both be accurate in our assessment. 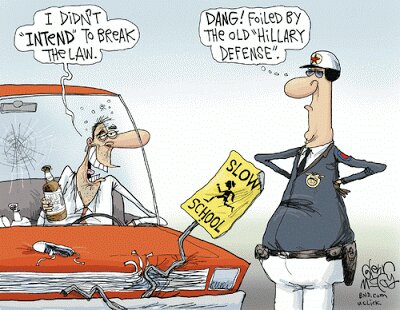 The Clintons -- both of them -- repeatedly exercise unethical judgment because they calculate their odds of getting away with it as very good because of who they are.  This is also part of the same sense of entitlement or whatever you'd like to call it.  That they do get away with it most clearly shows that there is one justice system for some people -- call them 1% -- and one for the rest of us.  It shouldn't escape you that it's mostly wealthy white people at the top and poor black people at the bottom. 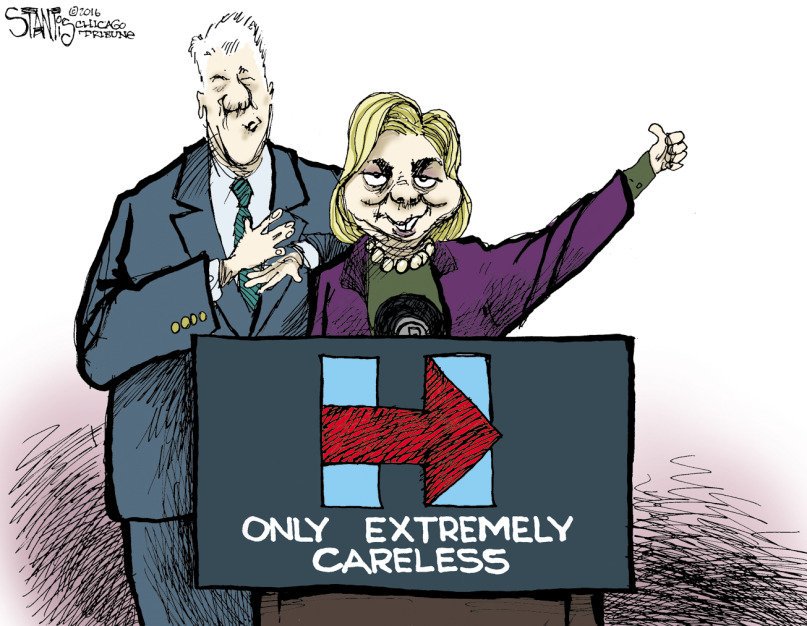 What it is not, as everyone knows, is justice.  It is -- or should be -- sufficient grounds for revolution, peaceful and political.  Or otherwise if it is necessary.  How necessary you deem revolution to be is also a question of how much do you have to lose or gain by it.

Keep in mind that a President Trump represents revolution to some, no matter how flawed, bigoted, or ignorant their logic may be in arriving at that conclusion.

-- More Trevor Noah: if the choices are "Grandma Nixon or a traffic cone soaked in raw sewage… maybe you shouldn’t have an election."

You have other choices, Trevor.  It's not either/or, more evil/less evil.  You don't have to choose between eating shit or drinking piss.  Stop thinking in binary.
Posted by PDiddie at Thursday, July 07, 2016