The only thing they have is fear 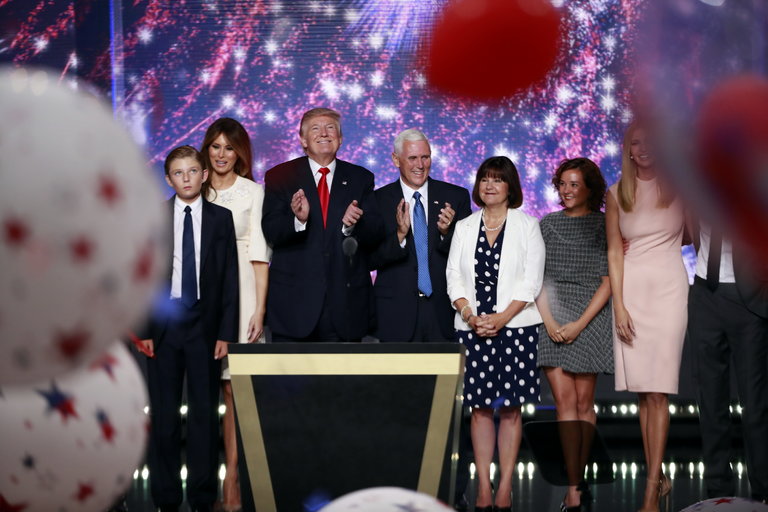 Donald Trump painted a picture of a dystopian America -- and sold himself as the only one who can fix it.

As he accepted the Republican nomination here Thursday night, Trump delivered tough talk, promising to eradicate crime, build a border wall, defeat ISIS, rejuvenate the economy and prod U.S. allies to step it up or else.


Not quite Ronald Reagan's 'Morning in America'.  Most of the analogies I'm reading mention Nixon.  I'd be more inclined to go with Mussolini.

Trump channeled Americans' grievances at home and abroad, pinning blame for spikes in violence and drugs on undocumented immigrants, casting the battle on terrorism as one being lost and demanding a return to law and order.

This is what presidential means to Trump. To his critics, it will come off as vacant and dictatorial. But to his backers, it's the very embodiment of they've been thinking, but not feeling welcome by society to say.

Channeling Richard Nixon, Trump insisted that he'd preside over "a country of law and order." He pledged -- without explaining how he'd fulfill the promise -- that crime would drop as soon as he took office.


There was some masterful psychological manipulation -- if you're weak of mind, that is.

The billionaire proceeded to lay out a dark vision of America: "Our convention occurs at a moment of crisis for our nation. The attacks on our police, and the terrorism in our cities, threaten our very way of life."

"Americans watching this address tonight have seen the recent images of violence in our streets and the chaos in our communities," he continued. "Many have witnessed this violence personally. Some have even been its victims."

But he positioned himself as the country's singular savior.

"I have a message for all of you," he said. "The crime and violence that today afflicts our nation will soon -- and I mean very soon -- come to an end. Beginning on January 20th 2017, safety will be restored."


A lot of conservatives buy straight into this nebulous scare talk, and far too many Democrats, too.  They're the ones who are so terrified that they think Trump can actually get elected this way.  In a sense, they're no more intelligent than the angry apes in Cleveland.  Here's Frank Luntz to spook them a little more.

"Mark my words," Luntz tweeted, "This speech will put Trump even or ahead of Hillary in polls by Monday, when the Democratic convention begins."


This isn't very bold of Frank despite his nationwide reputation; I predicted the same thing over a week ago.  Later today, in a move to blunt this bounce, Hillary Clinton will name her running mate.  I'm expecting her to pick Tim Kaine, but she could just as easily go with another milquetoast, Tom Vilsack.  Tom Perez still has an outside shot but he's just too far to the left for her.  Expect the predictable reaction from the Berners if it's one of the first two, as they gear up for their own doomed-from-the-start insurgency in Philadelphia next week.

In the same week that Roger Ailes was removed at Fox, Il Douche asserts himself as the country's leading merchant of bigotry.  Karma, I guess.

More coming; a collection of binary thinkers on both sides of Election 2016.
Posted by PDiddie at Friday, July 22, 2016