Women's right to choose will return to Supreme Court 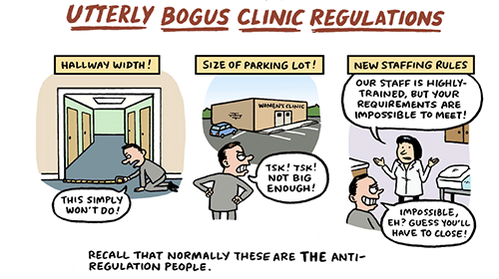 The 5th Circuit Court of Appeals ruled Tuesday that hospital-like structural requirements for Texas abortion clinics can go into effect, which will cause all but seven or eight clinics to shutter.

This was the second challenge to the state’s 2013 law that also banned abortion after 20 weeks of pregnancy, mandated physicians to have hospital admitting privileges and tightened regulations on abortion-inducing drugs.

The Ninth Circuit just struck down Idaho's 20 week ban less than two weeks ago.  So we have a circuit split, which requires the SCOTUS to decide the matter.  (It will be next summer before that happens.)  Here's the difference between the two appeals courts' decisions.  First, the Ninth, on Idaho.

The court ruled that the law breaches Casey’s standard that restrictions cannot put an “undue burden” on the ability to get an abortion before the point of viability.

“Because [Idaho’s law] places an arbitrary time limit on when women can obtain abortions, the statute is unconstitutional,” Judge Harry Pregerson wrote in an opinion for a three-judge panel. Two were appointees of Democratic presidents and one of a Republican president.

The Fifth doesn't see any undue burden on a woman living in El Paso having to drive hundreds of miles, twice, in order to obtain a pregnancy termination legally.  They blame her for being poor.

The panel upheld provisions of House Bill 2 that require Texas abortion clinics to meet surgical center standards and obtain hospital admitting privileges for physicians. The judges carved out one exception: the Whole Woman’s Health facility in McAllen, the last clinic in the Rio Grande Valley. In their ruling, the judges found that requiring women in McAllen to travel 235 miles to the nearest clinic in San Antonio was too burdensome. In a previous decision on House Bill 2, the Fifth Circuit established 150 miles as the standard for an undue burden. The judges did not grant the same exception to the remaining abortion provider in El Paso, arguing that women in West Texas can travel to New Mexico. (Notably, there are parts of West Texas—Presidio, for example—that are more than 150 miles from the nearest clinic, including ones in New Mexico.)

Besides the obvious contradictions about how many miles constitute an undue burden, and whether those miles include road miles in New Mexico, the most obnoxious part of the ruling was this.

The three-judge panel dismissed a lower court finding that poor women face not only additional travel expenses, but also practical barriers such as lack of child care, the inability to take time off work and internal immigration checkpoints.

“We do not doubt that women in poverty face greater difficulties,” the opinion reads, quoting a previous Fifth Circuit decision on House Bill 2. It goes on to say that in arguing their case, providers didn’t successfully prove that the law has an impact “on at least a large fraction of women.”

Further, the judges pointed to a 1980 Supreme Court case that downplays economic barriers:

“‘The financial constraints that restrict an indigent woman’s ability to enjoy the full range of constitutionally protected freedom of choice are the product not of governmental restrictions on access to abortions, but rather of her indigency.’”

The panel also agreed that the Legislature’s intent was “to protect the health and safety of women,” not to erode abortion access, as plaintiffs argued.

It's hell to be poor, ladies.  Next time press that aspirin between your knees.

It's hard to predict what the Supremes might decide with three or four -- maybe five -- justices on the conservative side of things and  four on the liberal end.  That will be the next parlor wagering opportunity: what will Kennedy and perhaps Roberts do?  That's a year away, though; they're deciding big questions on marriage equality and Obamacare subsidies questions at this very moment, before going on summer vacation.  Kuff has more links; I'll include two brief excerpts from Andrea Grimes...

Texas abortion providers have 22 days before the Fifth Circuit’s decision goes into effect. They will seek a stay from the court on its own ruling, and proceed to the Supreme Court if necessary.

... and Michael Barajas, on that "large fraction of women" mentioned in the decision.

Perhaps the most stunning thing about the Fifth Circuit's take on HB 2 is how the court determined whether enough women will be burdened by the law to render it unconstitutional. Under the regulations in HB 2 — which, barring some higher court order, will take effect July 1 — some 900,000 women of reproductive age will live more than 150 miles away from an abortion provider. That's one in six women of reproductive age in Texas who will have to travel more than 150 miles just to get to an abortion clinic.

Got that? According to the Fifth Circuit, nearly 1 million Texas women is not "a large fraction" of women.

Update: From The Week, regarding the sham of hospital admitting privileges.

"Admitting privileges" actually means that the doctor is akin to a staff member of that hospital; among other things, she has the privilege to admit a patient for a stay in the hospital without the say-so of any other doctors. The problem is that because hospitals don't want to become embroiled in abortion politics, they regularly refuse admitting privileges to doctors who perform abortions. For example, doctors at the last abortion clinic in Mississippi applied for admitting privileges to seven hospitals in the area, and were refused at every one.

So what happens if you're a woman who had an abortion and you find yourself experiencing complications, but your doctor doesn't have admitting privileges at the local hospital? Well, you go to whatever hospital you like (or, if it's a real emergency, the paramedics take you to one), and you get treated. If the doctors at the hospital need to consult with the doctor who performed your abortion, they pick up the phone and call her. Which is pretty much exactly what will happen if your doctor does have admitting privileges.

Like all abortion cases, this one will be determined entirely by the whims of Justice Anthony Kennedy, who has so much respect for women's autonomy that he once justified an abortion restriction by going on and on about how some women might later regret their choice, so it's much better to just not give them one. There's no way to tell for sure what he might do, but the question will hinge on whether the restrictions impose an "undue burden" on women seeking abortions, the standard established in a previous case. You don't have to wait 48 hours, have an ultrasound you don't want, and drive 200 miles to get yourself a vasectomy, but Kennedy may well decide that all that is not too much of a burden to impose on women who need abortions.