-- Something for good ol' Ted to keep crowing about. The picture is much clearer in the Democratic primary, where Hillary Clinton, the former secretary of state, U.S. senator and first lady, had the support of 53 percent of registered voters planning to vote in the Democratic primary next year. U.S. Sen. Bernie Sanders of Vermont was next, at 15 percent, followed by Vice President Joe Biden and U.S. Sen. Elizabeth Warren of Massachusetts, with 8 percent.

“Hillary Clinton is still an almost prohibitive favorite, but with Bernie Sanders and Joe Biden in the news for different reasons and with the primaries getting closer, we see a little bit of movement,” Henson said. “I wouldn’t say it’s anything for Clinton to worry about.”


This is status quo since the beginning (whenever the beginning was, that is).  I will point out that while Sanders is gathering momentum in many states -- even in this Texas poll he's tripled his support since February, for example -- he is struggling with Latino and African American voters.

"His name recognition in the Latino community is somewhere in between zero and extremely low," said Matt Barreto, a pollster who focuses on Latino voters. "And you're not going to win an election without Latino support."

Nonwhite voters make up a third or more of the turnout in Democratic primaries in most states, according to exit polls. Sanders, who represents a state that is 94% white, has little experience campaigning for minority votes. That will pose a challenge as he travels to more-diverse early-voting states like Nevada, home to a large Latino population, and South Carolina, where African Americans make up roughly half of Democratic primary voters.

"If your only significant constituency is older white voters, that'll be good in Iowa and New Hampshire, but when you hit Nevada and South Carolina you're in another world," said Democratic strategist Bill Carrick. "If you're going to be the nominee, you're going to have to do pretty well among Latino, African American voters, women, single women and millennials. That's the challenge for Bernie Sanders — to become more than a niche candidate and become a candidate with a broad coalition of support."


That's pretty much the hill he must climb.  Update: More on Sanders' pale white dilemma from the Fiscal Times.

-- My personal opinion of Ted Cruz leading in Texas is: LMAO. 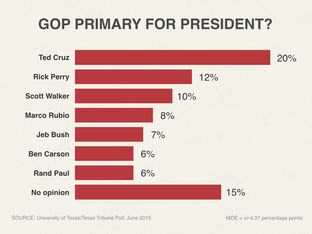 (Wisconsin Gov. Scott) Walker was running neck-and-neck with Cruz in February, when his entry into the race was making daily news, but the Texans’ home-field advantage is showing again. Cruz had the support of 20 percent of registered voters, followed by Perry at 12 percent, Walker at 10 percent, U.S. Sen. Marco Rubio of Florida at 8 percent and former Florida Gov. Jeb Bush at 7 percent.

Poll co-director Daron Shaw, a professor of government at the University of Texas at Austin, said the results reflect a “native son effect” in Texas that boosts the performance of candidates who are from here in comparison with their showings in national polls.

“I was just sort of assuming that Texas was a microcosm of national politics, but that turns out not to be the case,” he said.


Ha Ha. Never assume anything about Texas Republicans short of the stupidest and the worst.

“If you’re Ted Cruz, even if you get clobbered in Iowa, New Hampshire and South Carolina, you have no incentive to get out, because of the early Texas primary.”


That's Jim Henson, who also helps conduct this poll, with your takeaway.
Posted by PDiddie at Monday, June 22, 2015

At least some mainstream-liberalish pundits, like Joan Walsh at Salon, seem to be leading a semi-organized effort to paint Sanders as a "white persons" candidate.

As for how liberal Hillz is, I've had 16 voters on a poll on my blog so far. (Multiple answers allowed.) It's about who they'd take over Hillz in the Democratic primaries. All say Bernie. Everybody else got at least 2 votes.