-- As Jon Stewart painfully pointed out: "We won't do jackshit."  He's correct.  For Obama's part, he seems to be tired of talking about the rampant and senseless mass shootings in this country, but he's not offering to actually do anything about it.  "Calling upon Congress to enact gun legislation" is limp and toothless.  His has been a bullied pulpit in more ways than the fourteen times he's had to speak about gun violence during his 6-and-one-half years in office.

-- Remember that time John Roberts said there was not enough racism in the South to need the Voting Rights Act any longer?  Yeah, tens of thousands of gun deaths every year across America and and one, sometimes two cases of voter fraud.  Which one do we need more laws to protect us from?  Particularly in the South, where the GOP is losing elections so badly.  Or maybe New Jersey.

-- The gun nuts are already after the 'gun-free' zones of South Carolina's churches. 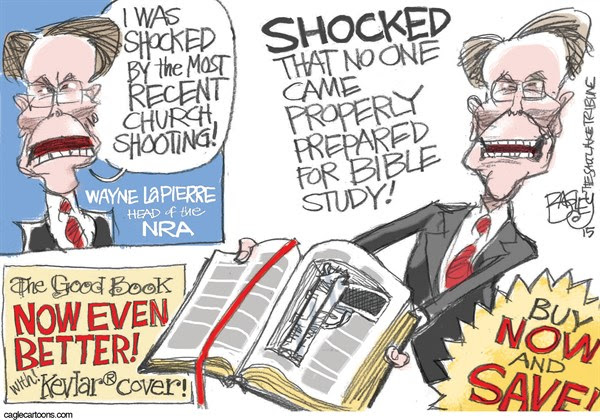 The report that knocks down this asinine 'good guy with gun stops bad guy with gun' horseshit was recently in the news.

According to the study, gun owners committed 259 justifiable homicides compared to 8,342 criminal homicides in 2012, the most recent year data was available.

That means gun owners are 32 times more likely to kill someone without cause than to act in self-defense, the study reasoned.

“We hope legislators in every state will stop believing the self-defense myth and look at the facts,” says Julia Wyman, executive director of States United to Prevent Gun Violence. “Guns do not make our families or communities safer.”


-- The Confederate flag, which flies over the South Carolina capital of Columbia, will not be lowered to half-staff like the others flying there.  Because it can't be -- it's fixed to the top of the pole -- and because it takes a vote of the legislature to lower it.  So despite the murder of one of its members, that flag is flying higher over the statehouse than the US flag today.  And that really says everything you need to know about the South.

-- Republicans are either demagoguing the issue or avoiding it altogether.  It's not about race, it's not about guns, it's not about thugs or even domestic terrorists when they're white; it's about an attack on faith.  It was religious persecution that occurred inside the Emanuel African Methodist Episcopal Church.  Stay classy, you God-fearing assholes.

-- While all that happened, the US House quickly and quietly passed the fast track trade authorization bill that was defeated just last week.  Last month the Senate did precisely the same thing.

Another 46 Democrats also voted to repeal a key portion of Obamacare yesterday.

Now do we understand why we can't have nice things in this wonderful country when so many of the alleged left party are actually right-wing?
Posted by PDiddie at Friday, June 19, 2015

I was disappointed but not surprised to see Fast Track pass. President Obama had successfully sold it to his party as a defeat and an embarrassment for him if it failed, and they chose party party over principles. Again.

A couple Dems get to go to the unions for money this way, though, saying, I (initially) tried!

Dear Leader needs to stop being a post-racial president, dammit. He's got no more offices to run for; is he still worried about seeming to be an "angry black man" because of corporate speaking fees?

EB&J is no shock on votes like that. She's a moderate on a lot of that stuff.

Obamacare? Remember, we really need the full-on National Health Service. (sigh) A single-payer system would be nice enough, but the country would go broke without a real liberal president swatting down excessive prices. Too bad we don't have one.

Addendum. There's one person to put on the spot right now.

@SenatorTimScott Do you agree with white #Republicans, including #GOP prez candidates, that the #CharlstonShooting was NOT due to #racism?